Canada has the longest shoreline of any country in the world, but estimates of how long the shoreline actually is will vary greatly depending on how it is measured. In British Columbia, for instance, the straight-line distance between Vancouver and Prince Rupert is approximately 800 km, but the length of the coastline between the two cities is about 41,000 km when traced on a relatively detailed map. Waves are the dominant energy source on exposed, open-ocean coasts, and when wave energy is expended on the shoreline, there is the potential for rapid and significant geomorphic change. An understanding of coastal geomorphic processes and landforms is important not only for pure scientific interests but also to avoid potentially disastrous consequences of the human occupation and use of coasts.

After completion of this lab, you will be able to:

The source of energy for most coastal erosion and sediment transport is wave action. Waves are distortions of the still water surface that contain (a) potential energy by virtue of water molecules being displace above and below the still water line; and (b) kinetic energy by virtue of water molecules being in motion. The faster the wind and the longer the fetch (or distance of open water across which the wind blows and waves travel), the larger the waves. Large waves have much greater energy than smaller waves (wave energy is proportional to the wave height squared). It is important to realise that waves in the open ocean (referred to as ‘deep water waves’) do not move the water forward, but rather the water molecules move in circular orbits. If you have ever floated offshore in a small boat or inner tube you will know this to be true; as a moving wave will pass beneath the boat and cause you to rise and fall but not move any appreciable distance forward or backward. The situation is different close to shore where there is net movement of the water in the direction of wave propagation, but where there can also be currents (e.g., longshore, rips). Waves are described using basic measurements such as wave height, wavelength, and wave period (Figure 21.1).

Wavelength is defined as the horizontal distance from wave crest to wave crest (or trough to trough), while height is the vertical difference between the trough and crest. Open ocean waves are modeled as a sinusoidal curve, with symmetry above and below the still water level. The time taken for successive crests to pass a fixed point is called the wave period. One of the interesting aspects of wave motion is that the period remains essentially constant despite changes in the wave form as it enters shallow water.

The velocity or phase speed of the wave, V (m/s), can be calculated if the wavelength, L (m), and the wave period, P (s) are known using the following definition:

Long period waves (referred to as long waves or swell waves) travel faster than short, locally-generated sea waves. As a consequence, waves have a tendency to sort themselves out as they move away from the storm centre that generates wave motion in the open ocean. Long swell waves that have travelled hundreds of kilometres may have periods of up to 15 seconds. Smaller waves have periods of only a few seconds.

Where ocean depths are greater than the length of the waves, the wave motion does not extend to the ocean floor and therefore remains unaffected by it. When waves propagate toward shore and the water depth decreases to below half the wavelength, the wave motion becomes increasingly affected by the presence of the bottom. Deep water waves are those where the depth (d) is greater than 0.5 the wavelength (L) (d/L > 0.5). Intermediate (0.5 > d/L > 0.05) and shallow water waves (d/L < 0.05) deform in response to interactions with the sea floor (Figure 21.2). The process of ‘wave transformation’ leads to some predictable changes in the shape of the wave. For example, as the depth of water decreases, the wavelength decreases. As a consequence of mass conservation, the wave height has to increase so the wave becomes more peaked as it approaches the shore. Other complex dynamics occur, leading to asymmetry between the front and rear of the wave, but eventually the wave may curl and break in the nearshore (either on an offshore sand bar or directly on the beach or rocky shore). As the wave breaks, most of the energy is dissipated by way of work along the shoreline, leading to cliff erosion or and sediment transport.  Figure 21.2 illustrates the typical changes in wave dimensions as they enter shallow water.

Waves are subject to refraction or bending of the wave crests as they approach the shore in much the same manner as light is refracted through a prism. Whenever waves approach a shoreline at an oblique angle, the presence of the sea floor turns the waves to become more parallel to the shore. The reason is that the offshore portions of the wave crest are not influenced by the bottom and are free to travel at their optimal speed (i.e., their deep-water velocity).  In contrast, the onshore portions of the wave crest are impeded by the presence of the bottom and therefore are forced to slow down.  On an indented coast the situation is more complex, but Figure 21.3 shows what is expected to happen. The wave crests in deep water approach the shore perpendicular to the general trend of the coast. The wave crests approaching the headlands begin to be affected by the sea floor first, when they are just under a kilometre from the shore. These portions of the wave crests slow down, shorten in wavelength, and increase in height. The same crest approaching the bay continues unimpeded (because water depth in front of the bay is deeper) and so moves ahead of the wave segment at the headland. Segments A and B at position 1 in Figure 21.3 are in deep water and are unchanged, but by the time they have reached position 3, A has slowed down and shortened its wavelength. It therefore lags behind B which is still unchanged. By the time the wave reaches position 5, A is about to break on the headland while B is advancing more slowly into the bay. The end result is that the wave crest is bent progressively by refraction so as to conform to the bathymetric contours and ultimately break parallel to the shoreline.

The convergent pattern of the orthogonals (the lines drawn at right angles to the wave crests, showing the direction of movement of the wave crest) shows that the wave energy in segment A is concentrated onto the headland. In the bay, wave height is reduced since the energy of segment B is spread out across a greater length of shoreline. Therefore, headlands tend to be sites of erosion while bays tend to be sites of deposition. The tendency is for waves to create a smooth, linear coastline, but this often does not happen because of differences in the strength of rocks (resistance to erosion) on headlands versus embayments.

Erosion, Transportation and Deposition along coasts

A number of mechanical and chemical effects produce erosion of rocky shorelines by waves. Depending on the geology of the coastline, the nature of wave attack, the tidal regime, and the long-term changes in sea level, erosional landforms such as wave-cut notches, marine cliffs, sea caves, arches and sea stacks can be formed.

Transportation by waves and currents is necessary to move rock particles eroded from one part of a coastline to a place of deposition elsewhere. One of the most important transport mechanisms results from oblique angle of wave attack relative to the shoreline orientation. The upward movement of water onto the beach (swash) occurs at an oblique angle. However, the return of water (backwash) is at right angles to the beach, resulting in the net movement of beach material laterally. This movement is known as beach drift. The never-ending cycle of swash and backwash and the resulting longshore drift can be observed on all sandy beaches.

Waves approaching the shoreline at an oblique angle also force longshore currents, especially in troughs between nearshore sand bars. These longshore currents are distinct from the longshore drift described earlier which operates directly on the foreshore or lower beach. In addition, tidal currents along coasts can be effective in moving eroded material. While incoming and outgoing tides produce currents in opposite directions on a daily basis, the current in one direction is usually stronger than in the other resulting in a net one-way transport of sediment. Longshore currents and tidal currents in combination with waves will determine the net direction of sediment transport and ultimately where sediment is eroded and deposited along the shoreline.

Many kinds of depositional landforms are possible along coasts depending on the geological configuration of the coastline, direction of sediment transport, character of the waves, and shape and steepness of the underwater slope offshore. Some common depositional forms are spits, bayhead beaches, barrier beaches or bayhead bars, tombolos, hooked spits and cuspate forelands or bars (Figure 21.4).

Sediment budgets are used to understand changes in beaches and coastlines over time. When constructing a sediment budget, a geomorphologist will try to quantify (measure or estimate) the inputs, outputs and changes in storage within a coastal compartment referred to as a ‘littoral cell’. The concept of a littoral cell is to a coastal geomorphologist what a watershed or drainage basin is to a hydrologist—it is an easily identified system of study with natural boundaries. For a beach system, the sediment budget is generally concerned with sand-sized particles (0.2 – 2 mm diameter) and larger (> 2 mm diameter). The inputs and outputs of a coastal sediment budget may consist of some or all of the components listed in Table 21.1. It is important to note in Table 21.1 that there are a number of locations/processes that can act as sources or sinks of sediment, depending on the local geography and time period of interest. Inputs can come in the form of point sources (e.g., river) or line sources (cliff erosion).

Sea level is not constant through time or space. Figure 21.5 shows changes in global sea level over the past 150,000 years. A number of processes contribute to changes in sea level both globally and locally:

This lab includes a number of exercises to help build your understanding of coastal processes. You will need access to Google Earth and the ability to scan an image and create a PDF. These exercises will require 2-2.5 hours to complete. You will submit your work following the instructions of your professor or lab instructor.

Sediment budgets are used to understand changes in beaches and coastlines over time. A sediment budget was developed for Sandy Beach in the 1960’s (see Table 21.2 and Figure 21.8).

In the 1970’s and 1980’s a number of multi-millionaires built mansions on the top of the cliffs above the beach. The owners were worried about their homes falling into the ocean due to erosion of the cliffs, and constructed revetments along the cliff base. As a consequence, cliff erosion was reduced to 20,000 m3/y. Erosion wasn’t completely stopped because a section of the cliffed coast was managed by a Coastal Conservancy that did not want to build revetments. Thus, certain portions of the cliff remained natural and unprotected. 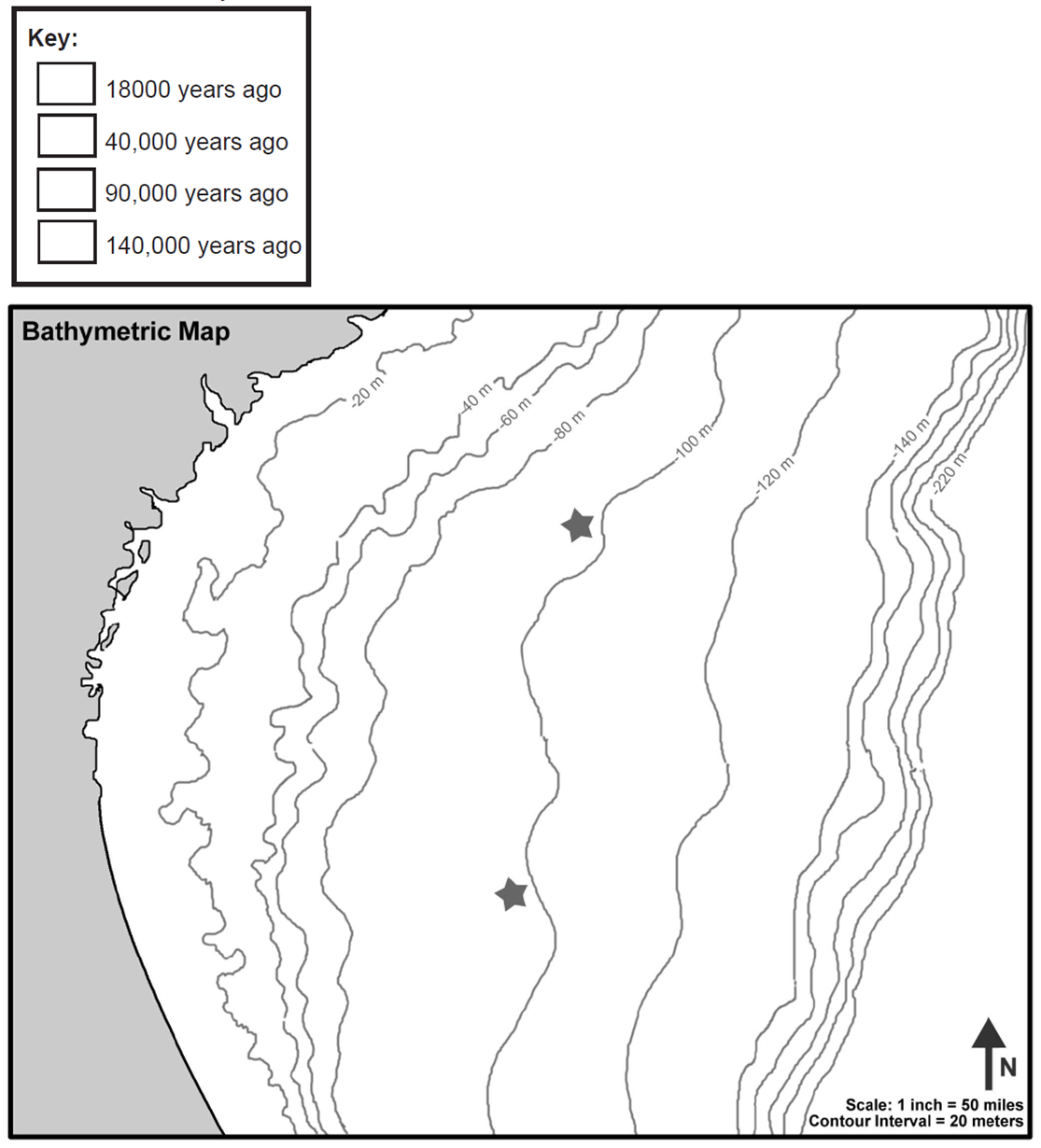