In 1970, Joni Mitchell’s Big Yellow Taxi alluded to the truth that the essential services natural areas provide to human communities were only truly recognized in their absence. It took the absence of forests in upstream areas and the consequent flooding of city streets and properties for scientists and engineers to understand that forests absorb significant amounts of rainfall, slowing its progression towards rivers and stream and transforming intense rainfall events into steady stream flow instead of rushing, erosive torrents. It took the creation of wide swaths of paved surfaces before anyone could measure the difference in temperature between urban areas and their surrounding wilds. It took the drying of wells and the rapid deterioration of surface water quality before we could understand that soils provide natural water filtration, capable of transforming impurities in contaminated surface water into healthy groundwater reserves and stream flows.

How Green and Grey Infrastructure Can Work Together

To date, green infrastructure systems are most frequently designed for stormwater management, which are provided by retaining and filtering rainwater at its source via the use of parks, urban forests, recreation areas, and swales (Haghighatafshar et al., 2018). There are many types of GI that provide multiple value-add benefits such as forests, flood plains, wetlands, and reefs that exist around cities and semi-natural systems including rain gardens and green roofs that exist within cities (Bartesaghi Koc, Osmond, & Peters, 2017). Urban green space provides multiple ecosystem services such as regulating temperatures during extreme heat events, improved air quality, providing human health benefits (e.g., physical activity), and mental well being (Obradovitch, 2018). The green infrastructure benefits described above are also essential in supporting cities in their efforts to adapt to a changing climate (e.g., mitigating the anticipated increase in extreme flooding events, water security/augmentation, extreme heat days and vegetation shading vs entire reliance upon air conditioning to name a few). The transition from grey to green infrastructure represents an expansion and added sophistication of municipal infrastructure priorities. The conventional responsibilities of facilitating transportation and the movement of goods and people, ‘waste’ removal, and flood prevention, will continue to be priorities for municipal governments. The employment of green infrastructure expands municipal infrastructure options while also improving water management, maintaining the integrity of the natural ecosystems, improving urban livability, and enhancing climate resilience. Planning justifications for green infrastructure are greatly improved by the use of triple bottom line analysis, which accounts for the economic, environmental and social impacts of infrastructure alternatives. 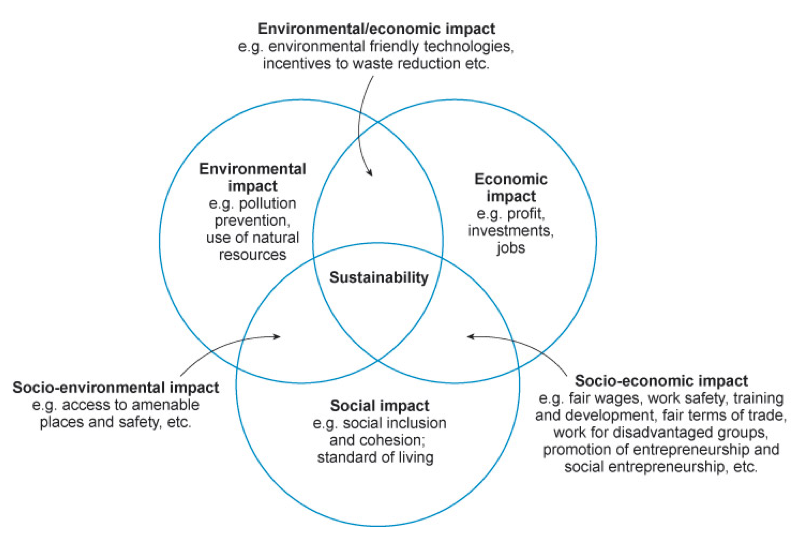 Source: This image is licensed under CC BY-SA 4.0 by The Open University.

A significant focus of GI to date has been the management of urban stormwater. This focus is reasonable in light of the now known impacts of our over reliance on grey infrastructure and the increasing impacts of climate change, for which the grey infrastructure of the twentieth century was not designed. GI has the capacity to augment these aging systems. For example, natural assets such as urban and suburban forests, managed with their ecological integrity in mind, are highly effective at reducing surface runoff (retaining 85-95% onsite) due to the high interception of tree canopies and storage capacity in forest soils (Gill et al., 2007; Gunnell et al., 2019). Other engineered GI systems like green roofs, bio-retention cells, and permeable pavements can reduce stormwater runoff and flooding in dense urban areas (Dong et al., 2017) with effective systems retaining 50-70 % of stormwater onsite (Demuzere et al. 2014). However, the capacity to deal with heavy rainfall events is most limited for engineered GI like green roofs and permeable pavements, which have less surface area to intercept and absorb rainfall compared to naturally vegetated areas (Gill et al. 2007). These engineered systems also can degrade with use over time and require regular maintenance to ensure performance (Selarno et al., 2018). Integrated systems of grey (e.g. pipes and concrete gutters) and green infrastructure provide the greatest resilience to urban flooding. GI appears to be most effective when used throughout the upper portions of a drainage basin, reducing flows to low-lying areas by up to 70% even during extreme rainfall events (Haghighatafshar et al., 2018; Gunnell et al., 2019). Reducing runoff with GI can decrease the likelihood of combined sewer overflows (Selarno et al., 2018) and further improve water quality by trapping surface pollutants in soils and plant tissue where they can be broken down over time or removed if necessary (Demuzere et al. 2014).

There is a growing recognition that ecosystems have inherent value (i.e., value in and of itself; not only as a service to humanity). Fostering biological diversity in human inhabited areas should not require additional justification. However, in most areas around the globe and throughout most of human history, inherent ecosystem inherent value has not figured prominently (or at all) in infrastructure decision-making and investments. Conventional economics plays into the increasingly high dollar value of land in urban areas, rendering the capacity to quantify the true economic (triple bottom line) value provided by natural assets essential to its justification and the expansion and preservation of natural systems in human-occupied environments. This is particularly important in the context of climate change and the ongoing mass extinction that has accompanied global urbanization. The literature reviewed for this course largely concludes that investments in natural assets can provide significant improvements to ecosystem health within and surrounding urban areas. However uncertainty remains as to how much investment is required, where the investment should be directed, and how to calculate the influence and impact of GI investments on ecosystem health and productivity.

An important factor about green infrastructure that is often overlooked (or simply not known) by municipalities is its capacity to improve the health and wellness of its residents and enhance the attractiveness of the community. The presence of green spaces in urban areas has been shown to yield a surprising number of community benefits for residents; improvements to health and self-reported happiness and feelings of wellness, along with reductions in crime and poverty (Burley, 2018; Dunn, 2010). The reasons behind these connections are only beginning to be quantified in academic studies but are easily intuited. Access to nature and natural spaces are an important part of being human. Natural areas provide improved air quality and space for physical activity, but they are also essential to feeling connected to nature and can also enable residents to feel connected with their broader communities. Public green spaces also provide cool, shaded outdoor meeting places on hot summer days, and places of solace and privacy for those who may not have it elsewhere. These public areas can also lead to feelings of mutual accountability within the community for the care and maintenance of these natural spaces, as all residents benefit from their use. Green Infrastructure implementation can also help address some of the important racial and economic inequities common in urban areas. In cities around the world, areas with higher concentrations of visible minorities and lower income people are far more likely to have poor access to green space and poorly maintained public infrastructure. These conditions contribute to lower home values, worse health outcomes, and continued marginalization and poverty. Green Infrastructure can help address each of these historical inequities (Schell, 2020).

Urban green spaces moderate temperature by providing evaporative cooling and shading from trees (Demuzere et al., 2014; Sun & Chen, 2017). This temperature moderation improves thermal comfort of urban residents and, combined with the added insulation of green roofs and green walls, can lower building energy use. Studies have illustrated that GI can, through strategic planting and maintenance, reduce heat-related deaths during extreme heatwaves through heat moderation of homes and entire residential areas (Demuzere et al., 2014). Dong et al (2018). Natural areas with mature trees provide significant cooling benefits, providing upwards of 10oC cooling effect compared to neighbouring areas in urban centres during extreme heat events (Gill et al, 2007). Though localized in benefit, trees can be complimented by other forms of GI such as bodies of water (GI; both engineered and natural), and manufactured shelter structures. (Sun & Chen, 2017). Green roofs may also augment green space access, especially in areas where the entrenched urban structure disallows for green space expansion/creation. Green roofs can help make up for a lack of parks and open space in high-density urban cores. Gill et al. (2007) show that greening all roofs in town centers of Manchester could reduce maximum surface temperatures by 6.6oC from current conditions and effectively counteract the projected rise in temperatures by the 2050s.

Each of the green infrastructure benefits described above improves community resilience to the impacts of climate change. Green infrastructure (GI) has been identified by UN-Water and the Intergovernmental Panel on Climate Change (IPCC) as essential to climate change adaptivity, enabling and supporting community resiliency, and promoting global water security, yet advances strategic and deliberate integration of GI into municipal infrastructure systems is uneven (Browder et. al., 2019; Revi et. al., 2014, Matthews, 2015). Climate change is expected to change weather patterns in a variety of ways; primarily exaggerating seasonal weather systems and the manifestations of these. Increased frequency and intensity of storms will pose challenges for managing stormwater flows and surface flooding (Collins et al., 2013). Extreme heat and drought are expected to become more common and will worsen the impacts of the urban heat island effect and further strain potable water supplies, especially in rapidly growing cities. Coastal communities will continue to incur and need to respond to sea-level rise (SLR), with specific emphasis on the potential displacement of hundreds of millions of people (Wong et al., 2014; de Jong et al., 2002; Valiela, 2006; McGranahan et al., 2007). Without strategic and deliberate actions to address community resilience, these conditions are likely to overwhelm existing urban infrastructure leading to extensive damage and loss of community infrastructure, increased public health risks, and negative impacts to social equity (Demuzere et al., 2014). Green infrastructure is effectively being employed around the world to fortify shorelines from sea-level rise, restore urban and exurban ecosystems, provide cool relief in urban areas, protect from drought and floods, and improve the physical and mental well-being of residents. The connections between green infrastructure and climate change resilience are discussed additional modules in the course.

Social Justice is another important lens through which to view green infrastructure and in the video clip provided, you will hear from the remarkable researcher/scholar Christopher Schell who speaks of the interplay between natural and human systems and the importance of looking at where trees and green spaces are located in urban centres. Be sure to watch this presentation (it is the closing keynote of the Puget Sound Infrastructure series). Pay attention to what Schell means when he says, “follow the trees.”

Green Infrastructure in Urban Centres: Policy, Design and Practice by Joanna Ashworth and Nick Mead-Fox is licensed under a Creative Commons Attribution 4.0 International License, except where otherwise noted.