Emperors and the Games

Of all the emperors Nero was the most aware of the power of theatrics and performances of all kinds. When he died, his last words were qualis artifex pereo (Suetonius, Nero 49.1), often translated as ‘what an artist dies in me.’ 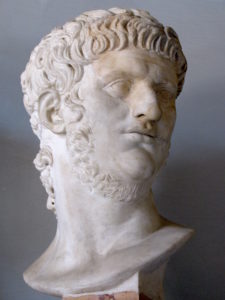 He gave many entertainments of different kinds: the Juvenalia, chariot races in the Circus, stage-plays, and a gladiatorial show. At the first mentioned he had even old men of rank and aged matrons take part. For the games in the Circus he assigned a separate seating area to the equestrians, and even matched chariots drawn by four camels. At the games which he gave for the “Eternity of the Empire,” which by his order were called the Maximi, parts were taken by several men and women of both senatorial and equestrian rank; a well known Roman equestrian mounted an elephant and rode down a rope; a Roman play of Afranius, too, was staged, entitled “The Fire,” and the actors were allowed to carry off the furniture of the burning house and keep it. Every day all kinds of presents were thrown to the people; these included a thousand birds of every kind each day, various kinds of food, tickets for grain, clothing, gold, silver, precious stones, pearls, paintings, slaves, beasts of burden, and even trained wild animals; finally, ships, blocks of houses, and farms.

These plays he viewed from the top of the proscenium. At the gladiatorial show, which he gave in a wooden amphitheatre, erected in the district of the Campus Martius within the space of a single year, he had no one put to death, not even criminals. But he compelled four hundred senators and six hundred Roman equestrians, some of whom were well to do and of unblemished reputation, to fight in the arena. Even those who fought with the wild beasts and performed the various services in the arena were of the same orders. He also exhibited a naval battle in salt water with sea monsters swimming about in it; besides pyrrhic dances by some Greek youths, handing each of them certificates of Roman citizenship at the close of his performance. The pyrrhic dances represented various scenes. In one a bull mounted Pasiphae, who was concealed in a wooden image of a heifer; at least many of the spectators thought so. Icarus at his very first attempt fell close by the imperial couch and splattered the emperor with his blood; for Nero rarely presided at the games, but used to view them while reclining on a couch, at first watching through small openings and then with the entire balcony uncovered.

A range of other texts and authors testify to Nero’s love for spectacle. And outrageous banquets.

It was an old desire of his to drive a chariot and team of four, and an equally repulsive ambition to sing to the lyre in the stage manner. “Racing with horses,” he used to observe, “was a royal accomplishment, and had been practised by the commanders of antiquity: the sport had been celebrated in the praises of poets and devoted to the worship of Heaven. As for song, it was sacred to Apollo; and it was in the dress appropriate to it that, both in Greek cities and in Roman temples, that great and prophetic deity was seen standing.” He could no longer be checked, when Seneca and Burrus[1] decided to concede one of his points rather than allow him to carry both; and an enclosure was made in the Vatican valley, where he could manoeuvre his horses without the spectacle being public. Before long, the Roman people received an invitation in form, and began to hymn his praises, as is the way of the crowd, hungry for amusements, and delighted if the sovereign leans in the same direction. However, the publication of his shame brought not the satisfaction he expected, but a stimulus; and, in the belief that he was reducing his own disgrace by polluting others, he brought on the stage those children of the great houses whom poverty had made sell themselves. They died and I regard it as a debt due to their ancestors not to record them by name. For the disgrace, in part, is his who gave money for the reward of infamy and not for its prevention. He even led well-known Roman equestrians to promise their services in the arena by what might be called enormous rewards, were it not that gifts from him who is able to command carry with them the compelling quality of necessity.

Of the entertainments [of Nero] the most famous for their infamous extravagance were those given by Tigellinus,[2] which I will describe as an illustration so I will not have again and again to narrate similar extravagance. He had a raft constructed on Agrippa’s lake, put the guests on board and had some smaller boats tow it to set it in motion. These boats glittered with gold and ivory; the crews were arranged according to age and experience in vice. He had obtained birds and beasts from remote countries and sea monsters from the ocean. Brothels were set up on the margin of the lake; these were crowded with noble ladies and on the opposite bank you could see naked prostitutes making obscene gestures and movements. As darkness approached all the grove around and surrounding buildings echoed with singing and shone brilliantly with lights.

The chief military and civilian commander of Rome. Two were elected each year and competition to become consul was incredibly intense as it represented the apex of a political career. After their term in office consuls could go on to be governors of provinces, where, under the Republic, they were wont to rob the provincials blind in order to recoup the costs of their political campaigns.

Spectacles in the Roman World by Siobhán McElduff is licensed under a Creative Commons Attribution-NonCommercial-ShareAlike 4.0 International License, except where otherwise noted.