The first published account of the theorizing that was involved in the development of John M. Keller’s ARCS model is contained in a 1979 publication entitled Motivation and Instructional Design: A Theoretical Perspective. At that early stage, Keller explains his working definition, “motivation is generally defined as that which accounts for the arousal, direction, and sustenance of behavior” (Keller, 1979, p. 29). The emergence of Keller’s model was heavily influenced by a research into a variety of underlying motivational constructs. The theoretical alignment of the original ARCS model is covered more in-depth in the theoretical alignment section. The ARCS model has an official website.

Beginning in 1979 John Keller began to develop what he calls an aperspectival model of learner motivation (Keller, 2009).  The embedded timeline allows you to scroll through some of the major milestones in the continuous development of the model.

Students who are extrinsically motivated are typically pursuing a task in anticipation of a reward while intrinsically motivated students tend to be more active participants, engaged in the learning process to address curiosity (Reynolds, 2017). Keller (2008) is clear that instructional design should be student-centered enough, that it does not attempt to apply extrinsic motivators to students who are already highly motivated. 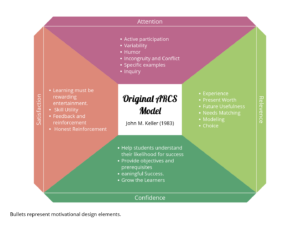 ARCS Motivation and Distance Learning by Leeann Waddington and Debra Dell is licensed under a Creative Commons Attribution-NonCommercial-ShareAlike 4.0 International License, except where otherwise noted.