Many Latin prefixes are derived from prepositions or adverbs that express spatial concepts. A similar principle can be seen at work in Germanic combinations like intake, outlet, undermine, and overthrow. If one can visualize the images that these prefixes convey, it is not necessary to memorize their meanings. The following schematic chart may provide some sense of the semantic picture. The shaded cube can be regarded as the representation of any space, affected by the various prefixes in the manner shown. 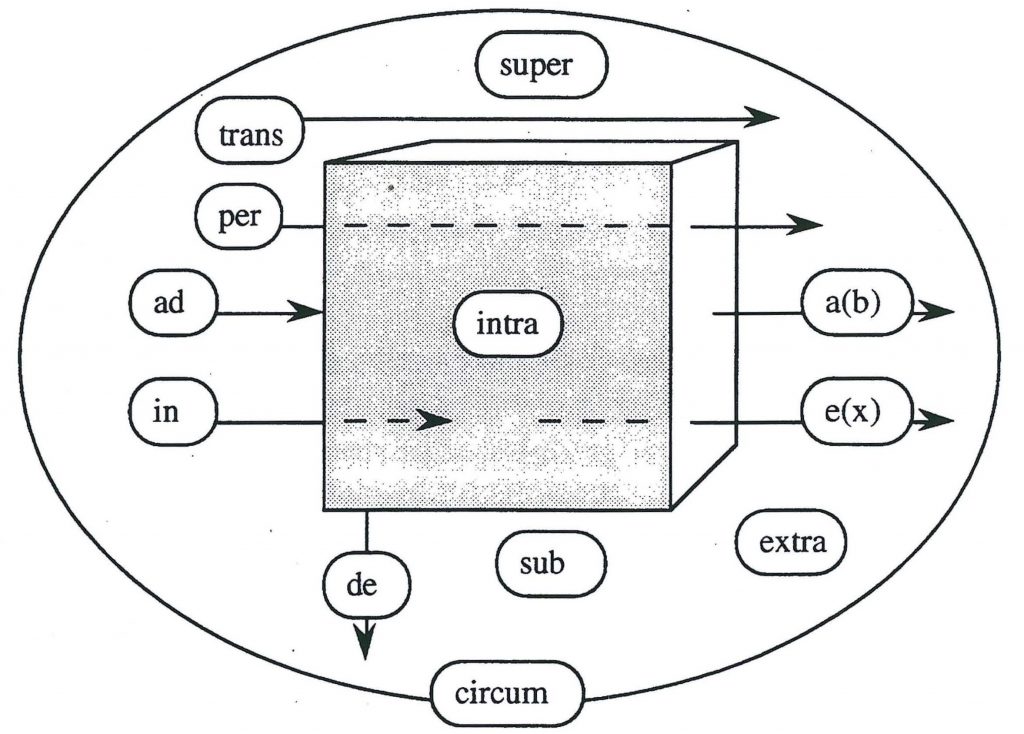 Just as super- and sub- can be viewed as a pair of semantic opposites, so can ad- (“to” or “toward”) be regarded as the opposite of a(b)- (“away,” “away from”). Ad-, which we won’t really be able to appreciate until we have some learned some verb vocabulary, has a bewildering tendency to assimilate with almost every consonant of the alphabet. It is present in the English words accept, affect, aggression, alleviate, announce, apprehend, acquire, arrogant, attract—and assimilate itself, which derives from ad- and similis (“liken toward”). Fortunately, ab- is much less prone to disguise, though it will appear sometimes in English as a- (a-verse) or abs- (abs-tract).

E- or ex- (“out,” “out of”), very common both in Latin and in English derivatives, is an easy prefix to recognize and remember. Eject is “throw out”; expel is “drive out.” In §42 we met egregious (L e-greg-ius), “standing out from the flock.” In classical Latin, de- meant “down (from)”; the etymological meaning of descend is “climb down.” However, it could also suggest “off” or “away,” as in deter, “frighten off,” and devious (L de-vi-us), “going off the road.”

Although they may perhaps overlap slightly in meaning, per- (“through”) and trans- (“across”) are quite straightforward. A perennial flower blooms “through the years,” whereas a transvestite “dresses across.”[1] If a substance is impervious (L im-per-vi-us), it does not allow a way through. In addition to its spatial force, the prefix per- can also mean “thoroughly” (perfervid, pellucid); and occasionally it carries the strange meaning of “to the bad,” as in pervert, perjure, perfidy, perfidious, perish, and perdition.

The form circum- (“around”) may be the easiest of all Latin prefixes. Even a word as learned and polysyllabic as circumnavigate can be understood by young children, since the force of the prefix is so obvious. Still, we’ll find that circum- has produced some very interesting and unusual English derivatives. It is related to the Latin noun circus, and to the adverb circa, which appears in English dating formulas (c. 1950 or ca. 1950 = “around” 1950).

By now you have surely noticed the alarming fact that there are two separate Latin prefix spelled in-. Earlier we saw the negative form, which is actually less common in Latin than an identical morpheme with the very different English meaning of “in” or “into.” In conjunction with verb bases, in- will usually have this spatial force; thus infer and import both mean “bring in.” You must stay on guard to avoid being tricked by the two different meanings of in-. Sometimes English is downright mean, as in the case of flammable and inflammable, which are exact synonyms. If you want to say that something will not burn, you must call it non-flammable—though there is Christmas tinsel on sale in Victoria which describes itself, with admirable linguistic panache, as ininflammable.

Greek and Latin Roots: Part I - Latin by Peter Smith (Estate) is licensed under a Creative Commons Attribution 4.0 International License, except where otherwise noted.