The scientific study of linguistics began to gain momentum in the late 18th century. At this time, European scholars became fascinated with verbal similarities between their own historical languages, chiefly Latin and Greek, and the classical language of India, Sanskrit, which was just then becoming known in the west. There seemed to be little doubt that some historical link existed between almost all the languages of Europe and several major languages of western Asia. In some areas of vocabulary, such as family relationships and number concepts, the similarities were astonishing:

How could one explain these startling resemblances? It was known, of course, that French and Spanish were directly descended from vulgar Latin,[1] and there was no mystery about Latin derivatives like trois and madre. By the same token, the historic kinship between German and English accounted for the closeness of Mutter and mother, of drei and three. The other similarities, however, could be explained only on the hypothesis of some common ancestral source, remote in time.

Eventually, scholars came to agree that there must have been an ancient prehistoric people—hypothetically identified as the “Indo-Europeans”—whose language was the ancestral source of many different linguistic streams. Even today, there is some dispute about the geographical origins of these people; but it is widely assumed that their homeland lay to the north of the Black Sea, in what is now southern Russia. Sometime around 3,000 BC, they must have begun dispersing in waves of migration—north and west into continental Europe, and east and south into Persia and India.

The result today, some 5,000 years later, is what we call the INDO-EUROPEAN FAMILY OF LANGUAGES, consisting of two main divisions (Western and Eastern), each comprising a number of major subfamilies or branches (Germanic, Italic, Indo-Iranian, etc.). The terminology and system of classification may vary somewhat from one authority to the next, but there is general agreement on all the essential features. For our present purposes, it is not important to know the details of this complex system, provided we grasp the basic principles and understand the relative positions of Greek, Latin, and English within the vast language family.

Let us leave to one side the EASTERN DIVISION of Indo-European, whose branches include Balto-Slavic (Russian, Polish, Czech, Serbo-Croatian, etc.); Indo-Iranian (ancient Sanskrit, modern Hindi, Bengali, Persian, Afghan, etc.); Armenian; and Albanian. Suffice it to say that English is at least distantly related to all these languages.

Our work in Greek and Latin Roots for Science and the Social Sciences 250 will relate entirely to the WESTERN DIVISION of Indo-European, which comprises four parallel branches:

These four branches or subfamilies developed, over many centuries, from four prehistoric proto-languages, which themselves had evolved from the common Indo-European tongue. There has often been contact among the subfamilies, and none of them has been immune to external influence. Still, this does not change the fact that English is a Germanic language, whereas Latin and French are Italic.

It will be more graphic to present this information as a kind of genealogical chart (though the biological analogy may somewhat misrepresent the continuous nature of linguistic evolution): 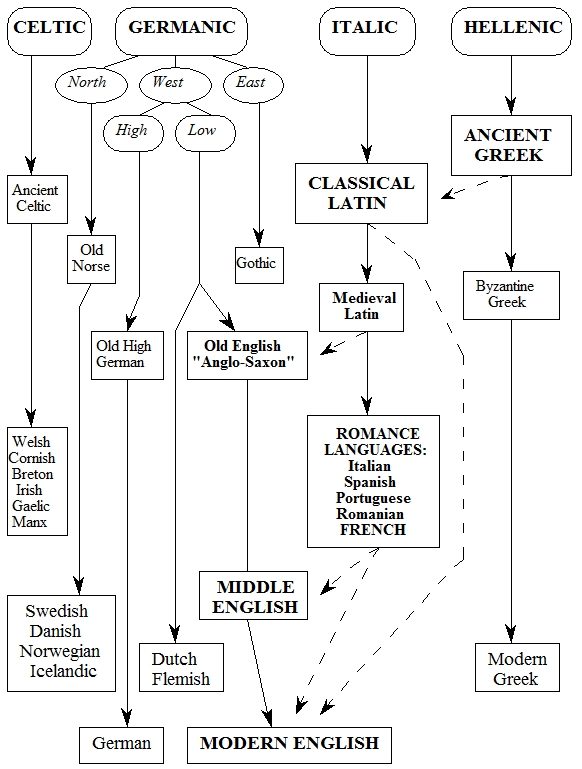 There is one important point that should be immediately apparent. Please notice that Greek, Latin, and English all belong to different language subfamilies. This means, in effect, that Greek vocabulary did not evolve into Latin, nor did Latin evolve into English. Native English words may have a COGNATE relationship with native words in Greek or Latin—mother is cognate with Greek meter and Latin mater; but a NATIVE English word, by definition, cannot be derived from a Latin or Greek word. This is simply because English is a Germanic language, and its native words are Anglo-Saxon in origin. When a Greek or Latin derivative appears in English, it must have been introduced, in the first instance, as a LOAN-WORD.[2] Although the loan-word may have become thoroughly naturalized in its new environment, it will always remain an alien, historically speaking.

In contrast, we can see from the chart why almost all French, Spanish, and Italian native vocabulary is directly DERIVED from Latin. The development of the ROMANCE LANGUAGES from vulgar Latin is a fascinating story, which we may explore from time to time later on. French mère (or Spanish madre) is in the direct line of descent from Latin mater; and may be regarded as its linguistic offspring or DERIVATIVE. Cognate words, such as mother and mater, are more like cousins, descended as they are from some remote common ancestor. Your dictionary may show this family link by using the phrase “akin to” when mentioning a cognate word or cognate root within an etymology.

Because languages cannot be sealed in a vacuum, the parallel branches of the Western Indo-European family have obviously not stayed pure and exclusive. Latin borrowed extensively from Greek over a period of many centuries. The highly adaptable English language has been borrowing words throughout its history, from every conceivable source. Latin words, in particular, have entered English by a variety of routes, most commonly by way of French. They are loan-words, but they are still Latin derivatives.

Greek and Latin Roots: Part I - Latin by Peter Smith (Estate) is licensed under a Creative Commons Attribution 4.0 International License, except where otherwise noted.