A memo (or memorandum, meaning “reminder”) is normally used for communicating policies, procedures, or related official business within an organization. It is often written from a one-to-all perspective (like mass communication), broadcasting a message to an audience, rather than a one-on-one, interpersonal communication. It may also be used to update a team on activities for a given project or to inform a specific group within a company of an event, action, or observance.

A memo’s purpose is often to inform and represent the business or organization’s interests, but it occasionally includes an element of persuasion or a call to action. All organizations have informal and formal communication networks. The unofficial, informal communication network within an organization is often called the grapevine, and it is often characterized by rumour, gossip, and innuendo. On the grapevine, one person may hear that someone else is going to be laid off and start passing the news around. Rumours change and transform as they are passed from person to person, and before you know it, the word is that they are shutting down your entire department.

One effective way to address informal, unofficial speculation is to spell out clearly for all employees what is going on with a particular issue. If budget cuts are a concern, then it may be wise to send a memo explaining the changes that are imminent. If a company wants employees to take action, they may also issue a memorandum.

A memo has a header with guide words that clearly indicate who sent the memo, who the intended recipients are, the date of the memo, and a descriptive subject line. The content of each guide word field aligns. The message then follows the header, and it typically includes a declaration (introduction), a discussion, and a summary. 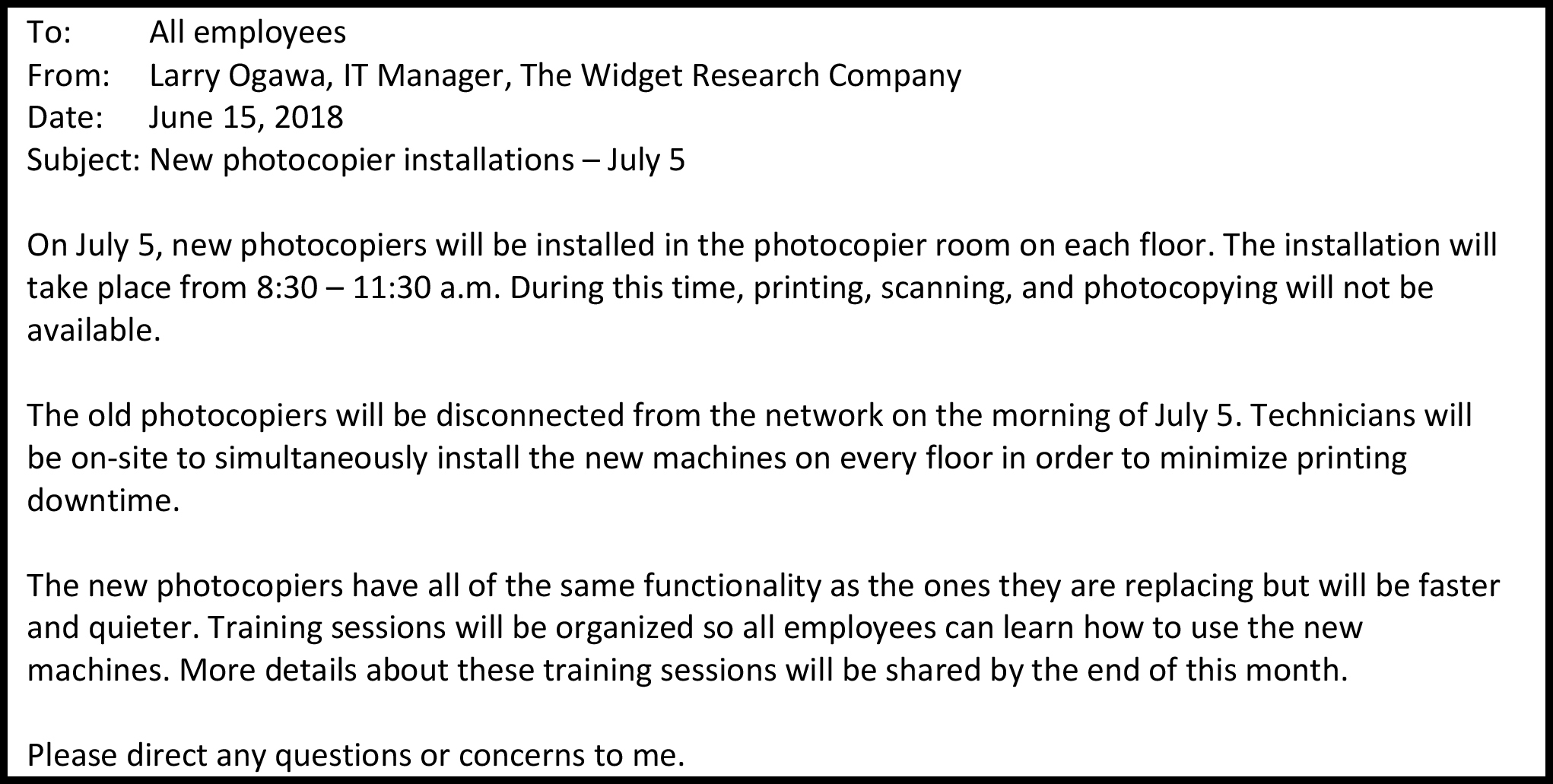 Always consider the audience and their needs when preparing a memo (or any message for that matter). An acronym or abbreviation that is known to management may not be known by all the employees of the organization, and if the memo is to be posted and distributed within the organization, the goal is to be clear and concise communication at all levels with no ambiguity.

Memos are often announcements, and the person sending the memo speaks for a part or all of the organization. Use a professional tone at all times.

Some written business communication allows for a choice between direct and indirect formats, but memorandums are almost always direct. The purpose is clearly announced immediately and up-front, and the explanation or supporting information then follows.

Memos should have an objective tone without personal bias, preference, or interest on display. Avoid subjectivity.

This chapter contains material taken from Chapter 9.2 “Memorandums and letters” in Business Communication for Success and is used under a CC-BY-NC-SA 4.0 International license.

Introduction to Professional Communications by Melissa Ashman is licensed under a Creative Commons Attribution-NonCommercial-ShareAlike 4.0 International License, except where otherwise noted.