What are the leadership theories that have the greatest contributions to offer to today’s business environment? In this section, we will review the most recent developments in the field of leadership.

Transformational leaders have four tools in their possession, which they use to influence employees and create commitment to the company goals (Bass, 1985; Burns, 1978; Bycio, Hackett, & Allen, 1995; Judge & Piccolo, 2004). First, transformational leaders are charismatic. Charisma refers to behaviours leaders demonstrate that create confidence in, commitment to, and admiration for the leader (Shamir, House, & Arthur, 1993). Charismatic individuals have a “magnetic” personality that is appealing to followers. Second, transformational leaders use inspirational motivation, or come up with a vision that is inspiring to others. Third is the use of intellectual stimulation, which means that they challenge organizational norms and status quo, and they encourage employees to think creatively and work harder. Finally, they use individualized consideration, which means that they show personal care and concern for the well-being of their followers. Examples of transformational leaders include Steve Jobs of Apple Inc.; Lee Iaccoca, who transformed Chrysler Motors LLC in the 1980s; and Jack Welch, who was the CEO of General Electric Company for 20 years. Each of these leaders is charismatic and is held responsible for the turnarounds of their companies.

While transformational leaders rely on their charisma, persuasiveness, and personal appeal to change and inspire their companies, transactional leaders use three different methods. Contingent rewards mean rewarding employees for their accomplishments. Active management by exception involves leaving employees to do their jobs without interference, but at the same time proactively predicting potential problems and preventing them from occurring. Passive management by exception is similar in that it involves leaving employees alone, but in this method the manager waits until something goes wrong before coming to the rescue.

Which leadership style do you think is more effective, transformational or transactional? Research shows that transformational leadership is a very powerful influence over leader effectiveness as well as employee satisfaction (Judge & Piccolo, 2004). In fact, transformational leaders increase the intrinsic motivation of their followers, build more effective relationships with employees, increase performance and creativity of their followers, increase team performance, and create higher levels of commitment to organizational change efforts (Herold et al., 2008; Piccolo & Colquitt, 2006; Schaubroeck, Lam, & Cha, 2007; Shin & Zhou, 2003; Wang et al., 2005). However, except for passive management by exception, the transactional leadership styles are also effective, and they also have positive influences over leader performance as well as employee attitudes (Judge & Piccolo, 2004). To maximize their effectiveness, leaders are encouraged to demonstrate both transformational and transactional styles. They should also monitor themselves to avoid demonstrating passive management by exception, or leaving employees to their own devices until problems arise.

Is transformational leadership genetic? Some people assume that charisma is something people are born with. You either have charisma, or you don’t. However, research does not support this idea. We must acknowledge that there is a connection between some personality traits and charisma. Specifically, people who have a neurotic personality tend to demonstrate lower levels of charisma, and people who are extraverted tend to have higher levels of charisma. However, personality explains only around 10% of the variance in charisma (Bono & Judge, 2004). A large body of research has shown that it is possible to train people to increase their charisma and increase their transformational leadership (Barling, Weber, & Kelloway, 1996; Dvir et al., 2002; Frese, Beimel, & Schoenborg, 2003). 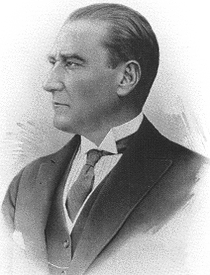 Mustafa Kemal Ataturk, the founder of the Turkish Republic and its first president, is known as a charismatic leader. He is widely admired and respected in Turkey and around the world. His picture appears in all schools, state buildings, all denominations of Turkish lira, and in many people’s homes in Turkey.

Even if charisma can be learned, a more fundamental question remains: Is it really needed? Charisma is only one element of transformational leadership, and leaders can be effective without charisma. In fact, charisma has a dark side. For every charismatic hero such as Lee Iaccoca, Steve Jobs, and Virgin Atlantic Airways Ltd.’s Sir Richard Branson, there are charismatic personalities who harmed their organizations or nations, such as Adoph Hitler of Germany and Jeff Skilling of Enron Corporation. Leadership experts warn that when organizations are in a crisis, a board of directors or hiring manager may turn to heroes who they hope will save the organization, and sometimes hire people who have no particular qualifications other than being perceived as charismatic (Khurana, 2002).

An interesting study shows that when companies have performed well, their CEOs are perceived as charismatic, but CEO charisma has no relation to the future performance of a company (Agle et al., 2006). So, what we view as someone’s charisma may be largely because of their association with a successful company, and the success of a company depends on a large set of factors, including industry effects and historical performance. While it is true that charismatic leaders may sometimes achieve great results, the search for charismatic leaders under all circumstances may be irrational.

The early 21st century has been marked by a series of highly publicized corporate ethics scandals: Between 2000 and 2003 we witnessed the scandals of Enron, WorldCom, Arthur Andersen LLP, Qwest Communications International Inc., and Global Crossing Ltd. As corporate ethics scandals shake investor confidence in corporations and leaders, the importance of ethical leadership and keeping long-term interests of stakeholders in mind is becoming more widely acknowledged.

Servant leadership is a leadership approach that defines the leader’s role as serving the needs of others. According to this approach, the primary mission of the leader is to develop employees and help them reach their goals. Servant leaders put their employees first, understand their personal needs and desires, empower them, and help them develop in their careers. Unlike mainstream management approaches, the overriding objective in servant leadership is not limited to getting employees to contribute to organizational goals. Instead, servant leaders feel an obligation to their employees, customers, and the external community. Employee happiness is seen as an end in itself, and servant leaders sometimes sacrifice their own well-being to help employees succeed. In addition to a clear focus on having a moral compass, servant leaders are also interested in serving the community. In other words, their efforts to help others are not restricted to company insiders, and they are genuinely concerned about the broader community surrounding their organization (Greenleaf, 1977; Liden et al., 2008). According to historian Doris Kearns Goodwin, Abraham Lincoln was a servant leader because of his balance of social conscience, empathy, and generosity (Goodwin, 2005).

Servant leadership is a tough transition for many managers who are socialized to put their own needs first, be driven by success, and tell people what to do. In fact, many of today’s corporate leaders are not known for their humility! However, leaders who have adopted this approach attest to its effectiveness. David Wolfskehl, of Action Fast Print in New Jersey, founded his printing company when he was 24 years old. He marks the day he started asking employees what he can do for them as the beginning of his company’s new culture. In the next 2 years, his company increased its productivity by 30% (Buchanan, 2007).

OB Toolbox: Be a Servant Leader

One of the influential leadership paradigms involves leaders putting others first. This could be a hard transition for an achievement-oriented and success-driven manager who rises to high levels. Here are some tips to achieve servant leadership.

Leaders have to be a lot of things to a lot of people. They operate within different structures, work with different types of people, and they have to be adaptable. At times, it may seem that a leader’s smartest strategy would be to act as a social chameleon, changing his or her style whenever doing so seems advantageous. But this would lose sight of the fact that effective leaders have to stay true to themselves. The authentic leadership approach embraces this value: Its key advice is “be yourself.” Think about it: We all have different backgrounds, different life experiences, and different role models. These trigger events over the course of our lifetime that shape our values, preferences, and priorities. Instead of trying to fit into societal expectations about what a leader should be, act like, or look like, authentic leaders derive their strength from their own past experiences. Thus, one key characteristic of authentic leaders is that they are self aware. They are introspective, understand where they are coming from, and have a thorough understanding of their own values and priorities. Secondly, they are not afraid to act the way they are. In other words, they have high levels of personal integrity. They say what they think. They behave in a way consistent with their values. As a result, they remain true to themselves. Instead of trying to imitate other great leaders, they find their own style in their personality and life experiences (Avolio & Gardner, 2005; Gardner et al., 2005; George, 2007; Ilies, Morgeson, & Nahrgang, 2005; Sparrowe, 2005).

One example of an authentic leader is Howard Schultz, the founder of Starbucks Corporation coffeehouses. As a child, Schultz witnessed the job-related difficulties his father experienced as a result of medical problems. Even though he had no idea he would have his own business one day, the desire to protect people was shaped in those years and became one of his foremost values. When he founded Starbucks, he became an industry pioneer by providing health insurance and retirement coverage to part-time as well as full-time employees (Shamir & Eilam, 2005). 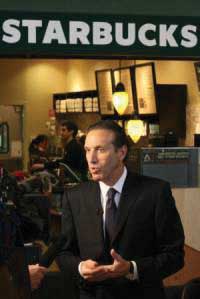 An example of an authentic leader is Howard Schultz, the founder of Starbucks coffeehouses. Witnessing his father losing jobs because of medical problems, he became passionate about a company’s need to care for its employees.

Authentic leadership requires understanding oneself. Therefore, in addition to self reflection, feedback from others is needed to gain a true understanding of one’s behaviour and its impact on others. Authentic leadership is viewed as a potentially influential style, because employees are more likely to trust such a leader. Moreover, working for an authentic leader is likely to lead to greater levels of satisfaction, performance, and overall well-being on the part of employees (Walumbwa et al., 2008).

Erdogan, B., & Enders, J. (2007). Support from the top: Supervisors’ perceived organizational support as a moderator of leader-member exchange to satisfaction and performance relationships. Journal of Applied Psychology, 92, 321–330.

Heneman, R. L., Greenberger, D. B., & Anonyuo, C. (1989). Attributions and exchanges: The effects of interpersonal factors on the diagnosis of employee performance. Academy of Management Journal, 32, 466–476.

Liden, R. C., Wayne, S. J., & Sparrowe, R. T. (2000). An examination of the mediating role of psychological empowerment on the relations between the job, interpersonal relationships, and work outcomes. Journal of Applied Psychology, 85, 407–416.