What Is a Performance Appraisal?

Even though performance appraisals can be quite effective in motivating employees and resolving performance problems, in reality, only a small number of organizations use the performance appraisal process to its full potential. In many companies, a performance appraisal takes the form of a bureaucratic activity that is mutually despised by employees and managers. The problems a poor appraisal process can create may be so severe that many experts, including the founder of the total quality movement, Edward Deming, have recommended abolishing appraisals altogether (Carson & Carson, 1993). On the other hand, creating and executing an effective appraisal system actually leads to higher levels of trust in management (Mayer & Davis, 1999). Therefore, identifying ways of increasing appraisal effectiveness is important.

Giving employees feedback is not synonymous with conducting a performance appraisal, because employees may (and should) receive frequent feedback. The most effective feedback immediately follows high or low performance. Therefore, waiting for a formal process to give feedback would be misguided. A formal appraisal is often conducted once a year, even though there are some organizations that conduct them more frequently. For example, there are advantages to conducting quarterly appraisals, such as allowing managers to revise goals more quickly in the face of changing environmental demands (Odiorne, 1990). Conducting appraisals once a year has the advantage of being more convenient for managers and for effectively tying performance to annual pay raises or bonuses.

What Is the Purpose of a Performance Appraisal?

Performance appraisals can be important tools to give employees feedback and aid in their development. Yet feedback is only one reason why companies perform appraisals. In many companies, appraisals are used to distribute rewards such as bonuses, annual pay raises, and promotions. They may also be used to document termination of employees. Research shows that performance appraisals tend to be viewed as more effective when companies tie them to reward decisions and to terminate lower performers (Lawler, 2003). This is not surprising in light of motivation theories such as reinforcement theory, which indicates that behaviour that is rewarded is repeated. Tying appraisal results to rewards may lead to the perception that performance is rewarded. However, if performance appraisal ratings are not accurate, it is possible for appraisals to be a major cause of reward unfairness.

What Makes an Effective Appraisal System?

What are the characteristics of an effective appraisal system? Research identified at least three characteristics of appraisals that increase the perception that they are fair. These characteristics include adequate notice, fair hearing, and judgment based on evidence. Adequate notice involves letting employees know what criteria will be used during the appraisal. Unfortunately, in many companies the first time employees see the appraisal form may be when they are being evaluated. Therefore, they may be rated low on something they didn’t understand was part of their performance. Fair hearing means ensuring that there is two-way communication during the appraisal process and the employee’s side of the story is heard. Judgment based on evidence involves documenting performance problems and using factual evidence as opposed to personal opinions when rating performance (Taylor et al., 1995).

As a student, would you prefer to be evaluated with respect to some objective criteria? For example, you could get an A if you correctly answer 90% of the questions in the exam, but would get a B if you answered only 80%. We are calling this type of appraisal an absolute rating because the grade you get depends only on your performance with respect to the objective criteria. The alternative to this approach is relative ranking. In this system, you would get an A if you are one of the top 10% of the students in class, but you would get a B if you are between 10% and 20%. In a relative ranking system, your rating depends on how your objective performance (test grade) compares with the rest of the students’ grades in your class.

If you say you would prefer an absolute rating, you are not alone. Research shows that ranking systems are often viewed more negatively by employees. However, many major corporations such as General Electric Company (GE), Intel, and Yahoo! Inc. are using relative rankings and truly believe in its advantages. For example, Jack Welch, the former CEO of General Electric, instituted a forced ranking system at GE in which 20% of employees would be in the top category, 70% would be in the middle, and 10% would be at the bottom rank. Employees who are repeatedly ranked at the lowest rank would be terminated. Relative rankings may create a culture of performance by making it clear that low performance is not tolerated; however, there are several downsides to rankings. First, these systems carry the danger of a potential lawsuit. Organizations such as Ford Motor Company and Microsoft faced lawsuits involving relative rankings, because employees who were older, female, or minority members were systematically being ranked in the lowest category with little justification. Second, relative rankings are also not consistent with creating a team spirit and may create a competitive, cutthroat environment. Enron Corporation was an organization that used relative rankings to its detriment. Third, relative systems have limited value in giving employees concrete feedback about what to do next year to get a better ranking. Despite their limitations, using them for a few years may help the organization become more performance-oriented and eliminate stagnation by weeding out some employees with persistent performance problems. As long as these systems fit with the company culture, are not used in a rigid manner, and are used for a short period of time, they may be beneficial to the organization (Boyle, 2001; Lawler, 2003; McGregor, 2006). 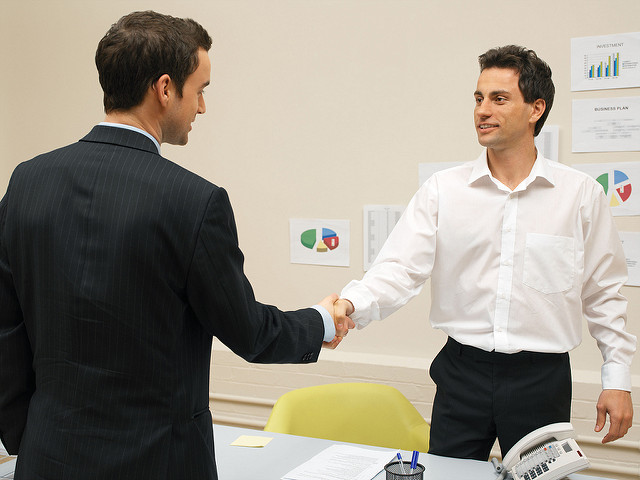 A performance appraisal meeting serves as a medium through which the rater gives positive and negative feedback to the ratee, helps the ratee solve performance problems, and recognizes effective performance.

A performance appraisal meeting is the most important component of a performance appraisal. After the rater uses the company’s appraisal form to evaluate the performance of the ratee, both sides meet to discuss positive and negative instances of performance. Thus, the meeting serves as the key medium through which the rater gives feedback to the ratee. The goal of providing performance feedback is to help the ratee solve performance problems and to motivate the employee to change behaviour. Conducting this meeting is often stressful for both parties, and training managers in providing performance feedback may be useful to deal with the stress of the managers as well as creating a more positive experience for both parties (Davis & Mount, 1984).

In the most effective meetings, feedback is presented in a constructive manner. Instead of criticizing the person, the focus should be on discussing the performance problems and aiding the employee in resolving these problems. By moving the focus of the conversation from the person to the behaviours, employee defensiveness may be reduced. When the supervisor is constructive, employees develop a more positive view of the appraisal system. Another approach to increasing the effectiveness of appraisal meetings is to increase employee participation. When employees have the opportunity to present their side of the story, they react more positively to the appraisal process and feel that the system is fair. Finally, supervisors should be knowledgeable about the employee’s performance. When it becomes clear that the person doing the evaluation has little understanding of the job being performed by the employee, reactions tend to be more negative (Cawley, Keeping, & Levy, 1998; Cederblom 1982; Burke, Weitzel, & Weir, 1978).

Performance appraisals involve observing and measuring an employee’s performance during an appraisal period, recording these observations, communicating results to the employee, and recognizing high performance while devising ways of improving deficiencies. Most appraisals are conducted by the supervisor, but there are many advantages to using 360-degree appraisals. Appraisals that are more effective give employees adequate notice, fair hearing, and judgment based on evidence. Some companies use relative rankings in which employees are compared to each other, but this system is not suitable to all companies. A performance appraisal meeting should be planned and executed carefully, with the supervisor demonstrating empathy and supportiveness. There are intentional and unintentional biases inherent in appraisals and being aware of them, increasing rater accountability, and training managers may be useful in dealing with some of them.