Emotions shape an individual’s belief about the value of a job, a company, or a team. Emotions also affect behaviours at work. Research shows that individuals within your own inner circle are better able to recognize and understand your emotions (Elfenbein & Ambady, 2002).

So, what is the connection between emotions, attitudes, and behaviours at work? This connection may be explained using a theory named Affective Events Theory (AET). Researchers Howard Weiss and Russell Cropanzano studied the effect of six major kinds of emotions in the workplace: anger, fear, joy, love, sadness, and surprise (Weiss & Cropanzano, 1996). Their theory argues that specific events on the job cause different kinds of people to feel different emotions. These emotions, in turn, inspire actions that can benefit or impede others at work (Fisher, 2002). 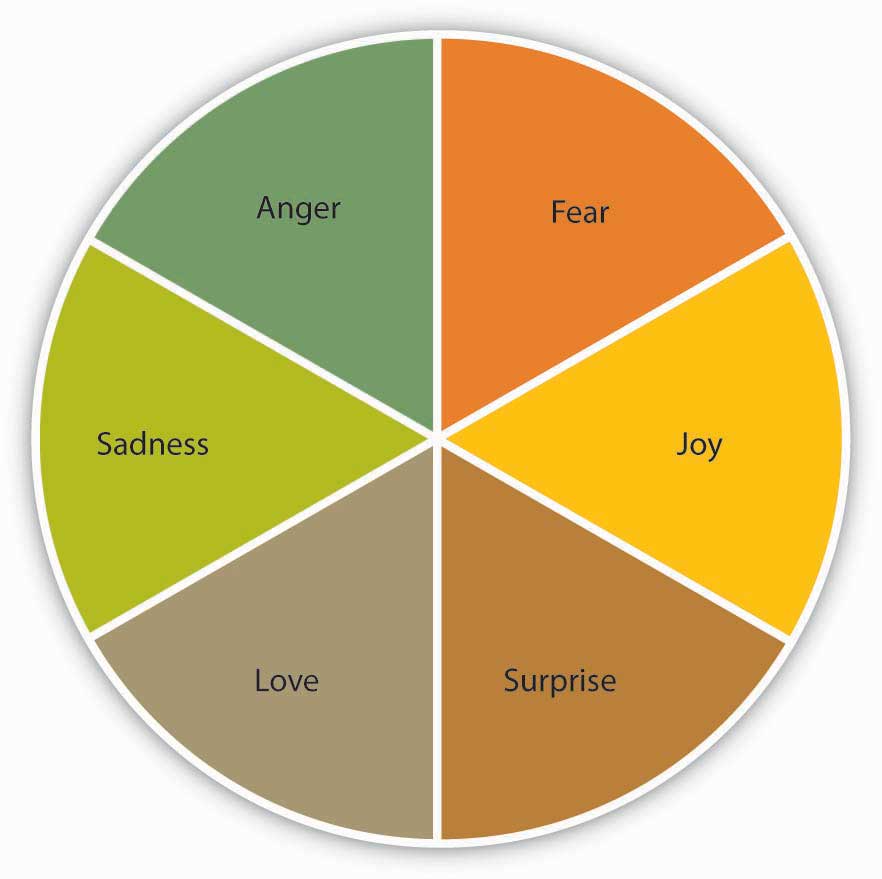 According to Affective Events Theory, six emotions are affected by events at work.

For example, imagine that a coworker unexpectedly delivers your morning coffee to your desk. As a result of this pleasant, if unexpected experience, you may feel happy and surprised. If that coworker is your boss, you might feel proud as well. Studies have found that the positive feelings resulting from work experience may inspire you to do something you hadn’t planned to do before. For instance, you might volunteer to help a colleague on a project you weren’t planning to work on before. Your action would be an affect-driven behaviour (Fisher, 2002). Alternatively, if you were unfairly reprimanded by your manager, the negative emotions you experience may cause you to withdraw from work or to act mean toward a coworker. Over time, these tiny moments of emotion on the job can influence a person’s job satisfaction. Although company perks and promotions can contribute to a person’s happiness at work, satisfaction is not simply a result of this kind of “outside-in” reward system. Job satisfaction in the AET model comes from the inside-in—from the combination of an individual’s personality, small emotional experiences at work over time, beliefs, and affect-driven behaviours.

Jobs that are high in negative emotion can lead to frustration and burnout—an ongoing negative emotional state resulting from dissatisfaction (Lee & Ashforth, 1996; Maslach, 1982; Maslach & Jackson, 1981). Depression, anxiety, anger, physical illness, increased drug and alcohol use, and insomnia can result from frustration and burnout, with frustration being somewhat more active and burnout more passive. The effects of both conditions can impact coworkers, customers, and clients as anger boils over and is expressed in one’s interactions with others (Lewandowski, 2003).

Negative emotions are common among workers in service industries. Individuals who work in manufacturing rarely meet their customers face-to-face. If they’re in a bad mood, the customer would not know. Service jobs are just the opposite. Part of a service employee’s job is appearing a certain way in the eyes of the public. Individuals in service industries are professional helpers. As such, they are expected to be upbeat, friendly, and polite at all times, which can be exhausting to accomplish in the long run.

Humans are emotional creatures by nature. In the course of a day, we experience many emotions. Think about your day thus far. Can you identify times when you were happy to deal with other people and times that you wanted to be left alone? Now imagine trying to hide all the emotions you’ve felt today for 8 hours or more at work. That’s what cashiers, school teachers, massage therapists, fire fighters, and librarians, among other professionals, are asked to do. As individuals, they may be feeling sad, angry, or fearful, but at work, their job title trumps their individual identity. The result is a persona—a professional role that involves acting out feelings that may not be real as part of their job.

Emotional labour refers to the regulation of feelings and expressions for organizational purposes (Grandey, 2000). Three major levels of emotional labour have been identified (Hochschild, 1983). 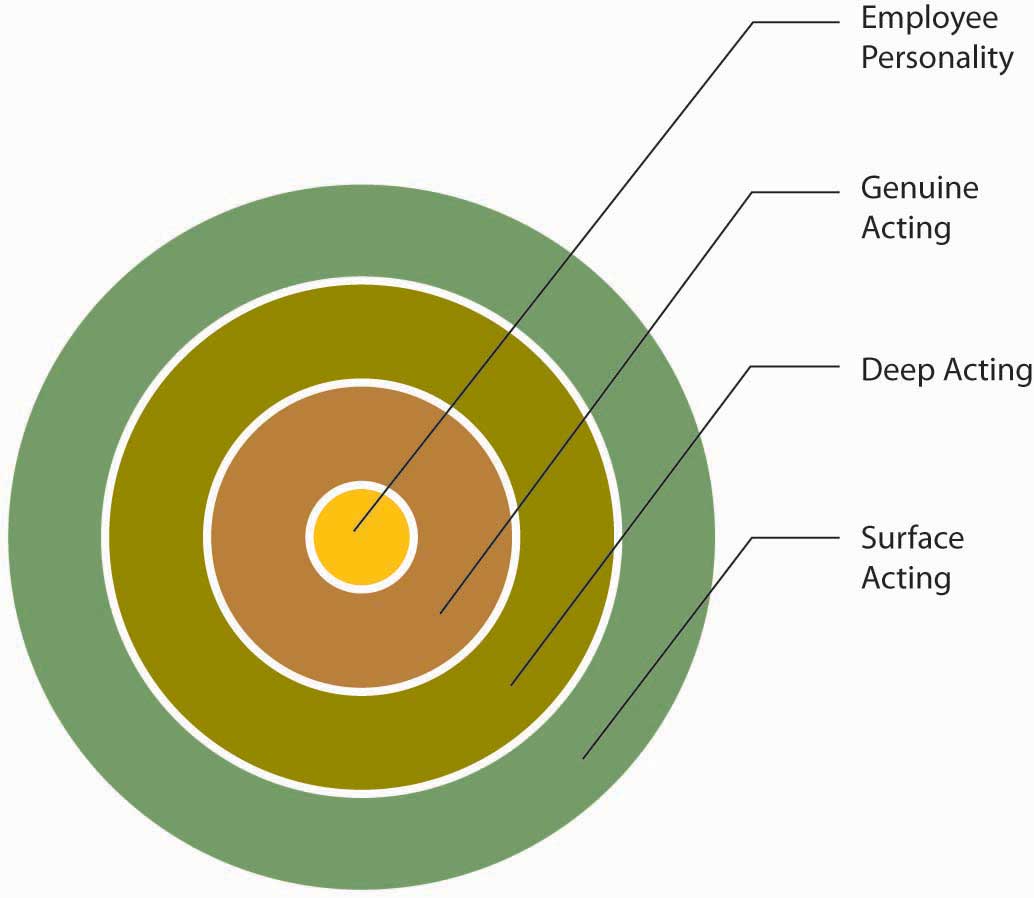 Research shows that surface acting is related to higher levels of stress and fewer felt positive emotions, while deep acting may lead to less stress (Beal et al., 2006; Grandey, 2003). Emotional labour is particularly common in service industries that are also characterized by relatively low pay, which creates the added potentials for stress and feelings of being treated unfairly (Glomb, Kammeyer-Mueller, & Rotundo, 2004; Rupp & Sharmin, 2006). In a study of 285 hotel employees, researchers found that emotional labour was vital because so many employee-customer interactions involve individuals dealing with emotionally charged issues (Chu, 2002). Emotional labourers are required to display specific emotions as part of their jobs. Sometimes, these are emotions that the worker already feels. In that case, the strain of the emotional labour is minimal. For example, a funeral director is generally expected to display sympathy for a family’s loss, and in the case of a family member suffering an untimely death, this emotion may be genuine. But for people whose jobs require them to be professionally polite and cheerful, such as flight attendants, or to be serious and authoritative, such as police officers, the work of wearing one’s “game face” can have effects that outlast the working day. To combat this, taking breaks can help surface actors to cope more effectively (Beal, Green, & Weiss, 2008). In addition, researchers have found that greater autonomy is related to less strain for service workers in the United States as well as France (Grandey, Fisk, & Steiner, 2005).

Cognitive dissonance is a term that refers to a mismatch among emotions, attitudes, beliefs, and behaviour, for example, believing that you should always be polite to a customer regardless of personal feelings, yet having just been rude to one. You’ll experience discomfort or stress unless you find a way to alleviate the dissonance. You can reduce the personal conflict by changing your behaviour (trying harder to act polite), changing your belief (maybe it’s OK to be a little less polite sometimes), or by adding a new fact that changes the importance of the previous facts (such as you will otherwise be laid off the next day). Although acting positive can make a person feel positive, emotional labour that involves a large degree of emotional or cognitive dissonance can be grueling, sometimes leading to negative health effects (Zapf, 2006).

One way to manage the effects of emotional labour is by increasing your awareness of the gaps between real emotions and emotions that are required by your professional persona. “What am I feeling? And what do others feel?” These questions form the heart of emotional intelligence. The term was coined by psychologists Peter Salovey and John Mayer and was popularized by psychologist Daniel Goleman in a book of the same name. Emotional intelligence looks at how people can understand each other more completely by developing an increased awareness of their own and others’ emotions (Carmeli, 2003). 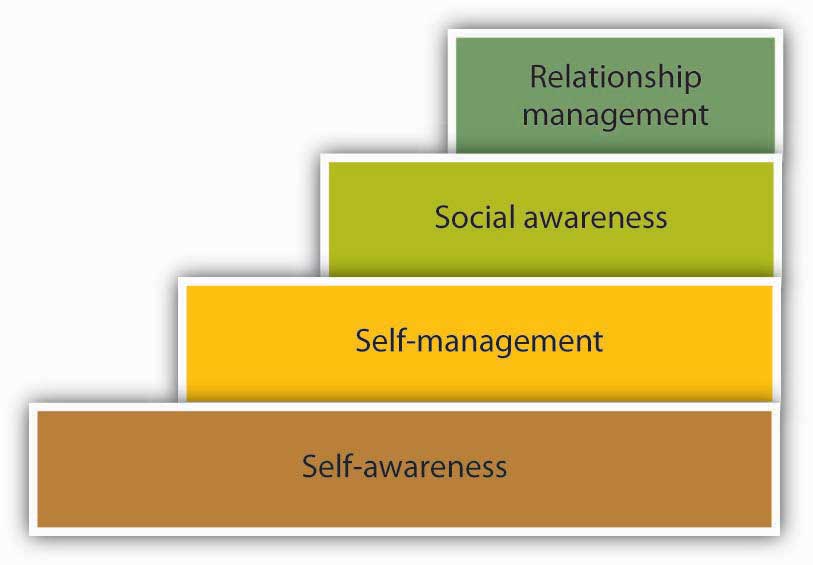 The four steps of emotional intelligence build upon one another.

In the workplace, emotional intelligence can be used to form harmonious teams by taking advantage of the talents of every member. To accomplish this, colleagues well versed in emotional intelligence can look for opportunities to motivate themselves and inspire others to work together (Goleman, 1995). Chief among the emotions that helped create a successful team, Goleman learned, was empathy—the ability to put oneself in another’s shoes, whether that individual has achieved a major triumph or fallen short of personal goals (Goleman, 1998). Those high in emotional intelligence have been found to have higher self-efficacy in coping with adversity, perceive situations as challenges rather than threats, and have higher life satisfaction, which can all help lower stress levels (Law, Wong, & Song, 2004; Mikolajczak & Luminet, 2008).

Emotions affect attitudes and behaviours at work. Affective Events Theory can help explain these relationships. Emotional labour is higher when one is asked to act in a way that is inconsistent with personal feelings. Surface acting requires a high level of emotional labour. Emotional intelligence refers to understanding how others are reacting to our emotions.

Carmeli, A. (2003). The relationship between emotional intelligence and work attitudes, behaviour and outcomes: An examination among senior managers. Journal of Managerial Psychology, 18, 788–813.

Grandey, A. (2000). Emotional regulations in the workplace: A new way to conceptualize emotional labour. Journal of Occupational Health Psychology, 5, 95–110.

Grandey, A. A. (2003). When “the show must go on”: Surface acting and deep acting as determinants of emotional exhaustion and peer-rated service delivery. Academy of Management Journal, 46, 86–96.

Rupp, D. E., & Sharmin, S. (2006). When customers lash out: The effects of customer interactional injustice on emotional labour and the mediating role of discrete emotions. Journal of Applied Psychology, 91, 971–978.

Zapf, D. (2006). On the positive and negative effects of emotion work in organizations. European Journal of Work and Organizational Psychology, 15, 1–28.