As with serious games, virtual and augmented reality are technologies that have been around for some time while making a relatively small impact on education in their earlier development. However more recent technological developments that have moved virtual worlds from two-dimensions (such as Second Life) into three-dimensional, deeply immersive environments have brought more attention to their potential in education (for a good overview of the history and potential of augmented and virtual reality in education, see Elmqadden, 2019).

8.7b.1 What are virtual/augmented/mixed reality?

A simple definition of these technologies is ‘human immersion in a synthetic world‘ (Seidel and Chatelier, 1997). The Franklin Institute provides the following more detailed definitions that attempt to distinguish between the different types of ‘synthetic’ worlds:

Augmented reality (AR) adds digital elements to a live view often by using the camera on a smartphone. Examples of augmented reality experiences include Snapchat lenses and the game Pokémon Go.

Virtual reality (VR) implies a complete immersion experience that shuts out the physical world. Using VR devices such as HTC Vive, Oculus Rift or Google Cardboard, users can be transported into a number of real-world and imagined environments such as the middle of a squawking penguin colony or even the back of a dragon.

In a mixed reality (MR) experience, which combines elements of both AR and VR, real-world and digital objects interact. Mixed reality technology is just now starting to take off, with Microsoft’s HoloLens one of the most notable early mixed reality apparatuses.

I will use the term ‘immersive technologies’ for all these technologies. However, verbal descriptions will always be somewhat inadequate in describing what are essentially multi-sensory experiences, combining vision, hearing and movement. These technologies are something that need to be experienced rather than explained if they are to be better understood.

8.7b.2 Why use immersive technologies?

There are several reasons why these technologies are beginning to be used more in education:

8.7b.3 Examples of immersive environments in education

Looking at the challenges above, it may be wondered why anyone would bother with immersive technologies in education. However, the potential benefits have barely been explored. I provide examples here that demonstrate both the potential benefits and how some immersive environments can be developed relatively easily. (For a more systematic review of VR applications in higher or post-secondary education, see Radianti et al., 2020)

In the Department of Chemistry at the University of Bristol in England, Dr. David Glowacki and his team in their VR laboratory created an interactive molecular dynamics modelling tool in the form of Nano Simbox VR, which allowed anyone to visit and play within the invisible molecular world (O’Connor et al., 2018). The main aim of this particular project was to provide an intuitive feeling of the way molecules operate in multiple dimensions to enable researchers and students to have a better understanding of how nano worlds operate, leading to better hypotheses for testing within this particular domain.

As the authors state in the article:

From a modeling perspective, the nanoscale represents an interesting domain, because the objects of study (for example, molecules) are invisible to the naked eye, and their behavior is governed by physical forces and interactions significantly different from those forces and interactions that we encounter during our day-to-day phenomenological experience. In domains like this, which are imperceptible to the naked eye, effective models are vital to provide the insight required to make research progress….molecular systems typically have thousands of degrees of freedom. As a result, their motion is characterized by a complicated, highly correlated, and elegant many-body dynamical choreography, which is nonintuitive compared to the more familiar mechanics of objects that we encounter in the everyday physical world. Their combined complexity, unfamiliarity, and importance make molecules particularly interesting candidates for investigating the potential of new digital modeling paradigms.

Glowacki and his team in Science Advances (O’Connor et al., 2018) describe how the VR app enabled researchers to:

Building dynamic models that operate not only in real time but also in three dimensions can require not only specialized virtual reality equipment, but more importantly massive amounts of computing power to handle the visual representation and modelling of highly complex, interactive dynamic molecular processes. However, through the use of cloud computing and faster networks, building such models has now become a reality, enabling not only such models to be represented but allowing some degree of real-time manipulation by researchers in different locations but within the same time-frame. The main advantage of the use of a cloud platform is to allow the scaling up of modelling from simple to much more complex dynamic nano interactions and the synchronous sharing of the virtual reality experience with multiple users.

Not all applications of VR though need massive computing power. Other exploratory uses of virtual reality are

Augmented reality is a simpler immersive technology than virtual reality, often based on apps for mobile phones. For instance, students in the University of British Columbia’s APBI 200 Introduction to Soil Science learn about the effects of topography on the formation of different soil types. The department has developed the Soil TopARgraphy app, which allows viewing and manipulating a terrain model in the Kamloops region of British Columbia. Students learn how topography impacts the distribution of soil orders through its effects on microclimate (i.e. temperature and water). Students are able to view the terrain model with a color-coded elevation map or a satellite image on their mobile phones. Furthermore, students can tap on flags to read about different soil orders, view images, and take a self-study quiz to reinforce their understanding.

For this project, UBC’s Emerging Media Lab built two mobile apps, an AR viewer for students (Android and iOS) and an editor for the instructor (Android). The AR viewer is the app described above to view a predefined terrain. The instructor can customize contents with the supplementary editor app. They can update soil location on terrain, description, image, and quizzes 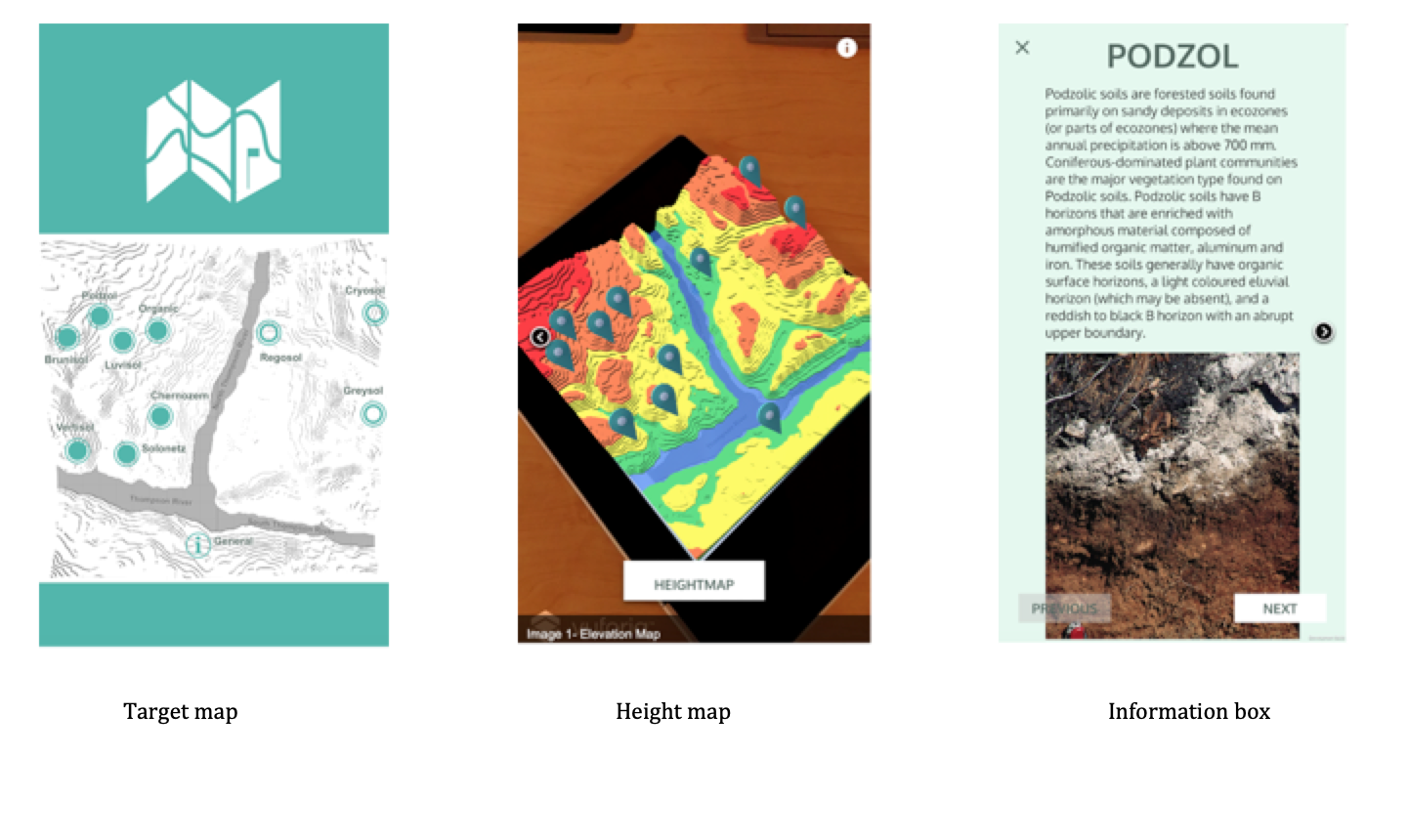 Other examples of AR applications from UBC:

These may appear formidable challenges, but the potential benefits could be considerable.

8.7b.5 The unique characteristics of immersive technologies

The development of fully immersive technologies is so recent that it is premature to try to identify all the educational affordances that are unique to this medium. New applications are being explored all the time. Most of the evidence is qualitative, based on people’s personal experience of using the technology. Empirical evidence that validates specific educational affordances of VR/AR in terms of improved learning outcomes is currently lacking. However, the potential of VR/AR in terms of assisting learning can be identified.

First of all, many of the affordances or educational characteristics of other media, and in particular video, will apply to VR and AR, but often more intensely, because of the immersive experience.

Educational applications where the cost of alternative or traditional ways of learning are too expensive or too dangerous, will be particularly suitable for virtual reality applications. Examples might be emergency management, such as shutting down an out-of-control nuclear reactor, or defusing a bomb, or managing a fire on an oil tanker, or exploring inside the physical structure of a human brain. In particular, VR would be appropriate for learning in contexts where real environments are not easily accessible, or where learners need to cope with strong emotions when making decisions or operating under pressure in real time.

AR, which is often easier to design and implement, enables learners to practice applications of knowledge in semi-realistic contexts.

However, at the time of writing we are just beginning to understand the potential of this medium. Over time, the educational affordances of this medium will become much clearer.

8.7b.6 Strengths and weaknesses

VR is not just a fad that will disappear. There are already a large number of commercial applications, mainly in entertainment and public relations, but also increasingly for specific areas of education and training. There is already a lot of excellent, off-the-shelf software for creating VR environments, and the cost of hardware is dropping rapidly (although good quality headsets and other equipment are still probably too expensive for required use by large numbers of students).

The fields of application of this technology are unlimited: training in the use of complex equipment, simulation of surgical procedures, architectural design testing, the reconstruction of sites in archeology, virtual museum visits, treatment of pain and phobias, and many other possibilities.

To enable the more emotional aspects of decision making to be handled, the immersive experience needs to be realistic. This will probably require high quality media production. Thus VR may often need to be combined with simulation design, quality media production and powerful computing to be educationally effective, again pushing up the cost. For these reasons, medicine is a particularly likely area for development, where traditional training costs are really high or where training is difficult to provide with real patients.

Once again, though, applications will tend to be very specific to the needs of a particular subject area. This means designers must include subject specialists with a deep understanding of the field who can combine the power of the technology with the needs of learners in a particular learning context. VR in particular requires instructors with imagination and creativity, working with other professionals such as media producers, learners themselves, as well as specialists in VR design.

What has inhibited widespread educational use of earlier two-dimensional VR developments such as Second Life has been the high cost and difficulty of creating the graphics and contexts for learning. Thus even if the hardware and software costs for VR are low enough for individual student use, the high production costs of creating realistic educational contexts and scenarios are likely to inhibit its general use.

Some caution is also needed in assuming that people will behave the same in real life as they do in VR environments. Gallup et al. (2019) found a major difference in the influence of social factors within real-world and virtual environments: social cues in actual reality appear to dominate and supersede those in VR. One of the authors, Alan Kingstone, concluded:

“Using VR to examine how people think and behave in real life may very well lead to conclusions that are fundamentally wrong. This has profound implications for people who hope to use VR to make accurate projections regarding future behaviours. For example, predicting how pedestrians will behave when walking amongst driverless cars, or the decisions that pilots will make in an emergency situation. Experiences in VR may be a poor proxy for real life.”

This means we need more experimentation. This is still a relatively new technology, and there may be very simple ways to use it in education that are not costly and meet needs that cannot be easily met in traditional teaching or with other existing technology. For this to happen, though, educators, software developers, and media producers need to come together to play, experiment, test and evaluate.

Nevertheless, VR and AR are exciting technologies with the potential to change radically conventional learning processes.

Connolly, B. (2018) How virtual reality is transforming learning at the University of Newcastle, CIO, 8 March

Rolfson, E. (2019) People think and behave differently in virtual reality than they do in real life UBC News, 24 January

Click on the podcast below for my feedback and my personal views on VR for teaching and learning.