Chapter 3. The Human Body and Digestion

By the end of this chapter, you will be able to:

A famous quote by the Greek physician Hippocrates over two thousand years ago, “Let food be thy medicine and medicine be thy food” bear much relevance on our food choices and their connection to our health. Today, the scientific community echoes Hippocrates’ statement as it recognizes some foods as functional foods. Functional foods are defined as “whole foods and fortified, enriched, or enhanced foods that have a potentially beneficial effect on health when consumed as part of a varied diet on a regular basis, at effective levels.”

In the latter nineteenth century, a Russian doctor of immunology, Elie Metchnikoff, was intrigued by the healthy life spans of people who lived in the tribes of the northern Caucasus Mountains. What contributed to their long lifespan and their resistance to life-threatening diseases? A possible factor lay wrapped up in a leather satchel used to hold fermented milk. Observing the connection between the beverage and longevity, Dr. Elie Metchnikoff began his research on beneficial bacteria and the longevity of life that led to his book, The Prolongation of Life. He studied the biological effects and chemical properties of the kefir elixir whose name came from the Turkish word “kef” or “pleasure.” To this day, kefir is one of the most widely enjoyed beverages in Russia.

Kefir has since found its way into Canada, where it is marketed in several flavors and can be found at your local grocery store. It is one product of the billion-dollar functional food industry marketed with all sorts of health claims from improving digestion to preventing cancer. What is the scientific evidence that kefir is a functional food? Expert nutritionists agree that probiotics, such as kefir, reduce the symptoms of lactose intolerance and can ward off virally caused diarrhea. While some health claims remain unsubstantiated, scientific studies are ongoing to determine the validity of other health benefits of probiotics.

Another well-known probiotic is Kimchi. Kimchi is a traditional Korean food that is manufactured by fermenting vegetables (usually cabbage). Similar to the kefir, kimchi also has shown to have similar health benefits as a probiotic food.[1]

The Japanese also have traditional fermented foods such as natto. Natto is made from fermented soybeans and has many health benefits as a probiotic. Along with the beneficial components, natto is very nutrient-dense containing carbohydrates, fats, protein, fiber, vitamins and minerals.[2] Other common foods we ferment in our diet include miso, sauerkraut, kombucha, and tempeh.

Figure 3.1 Components of Organ Systems in the Human Body 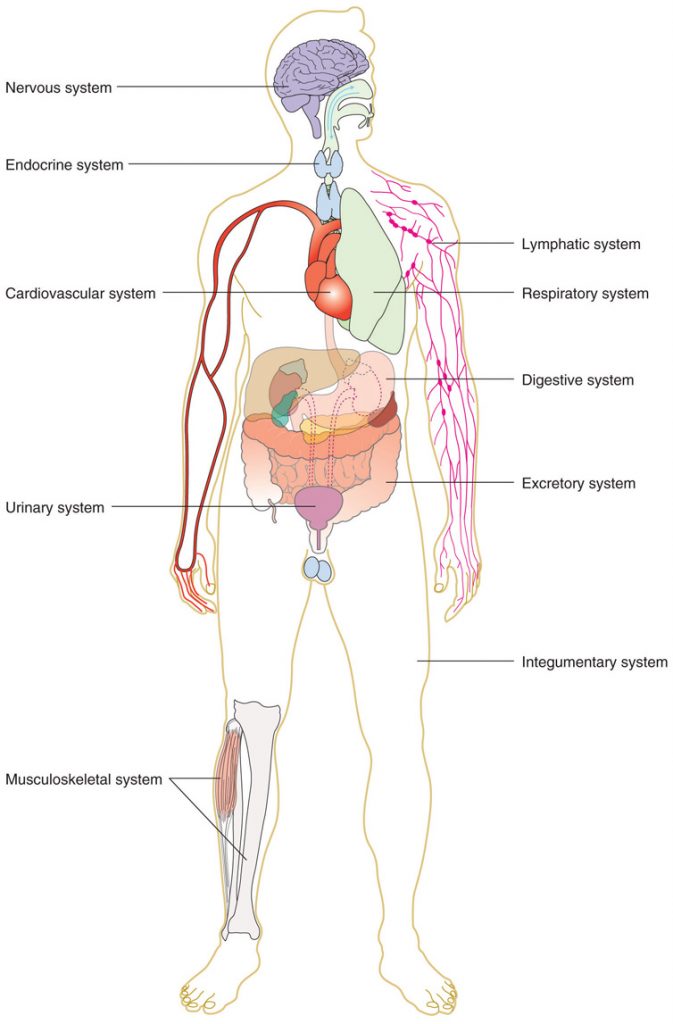 Knowing how to maintain the balance of friendly bacteria in your intestines through proper diet can promote overall health. Recent scientific studies have shown that probiotic supplements positively affect intestinal microbial flora, which in turn positively affect immune system function. As good nutrition is known to influence immunity, there is great interest in using probiotic foods and other immune-system-friendly foods as a way to prevent illness. In this chapter we will explore not only immune system function, but also all other organ systems in the human body. We will learn the process of nutrient digestion and absorption, which further reiterates the importance of developing a healthy diet to maintain a healthier you. The evidence abounds that food can indeed be “thy medicine.”

Human Nutrition by Karine Hamm is licensed under a Creative Commons Attribution 4.0 International License, except where otherwise noted.