When placed in a fluid, some objects float due to a buoyant force. Where does this buoyant force come from? Why is it that some things float and others do not? Do objects that sink get any support at all from the fluid? Is your body buoyed by the atmosphere, or are only helium balloons affected ((Figure))?

(a) Even objects that sink, like this anchor, are partly supported by water when submerged. (b) Submarines have adjustable density (ballast tanks) so that they may float or sink as desired. (c) Helium-filled balloons tug upward on their strings, demonstrating air’s buoyant effect. (credit b: modification of work by Allied Navy; credit c: modification of work by “Crystl”/Flickr)

The buoyant force is the upward force on any object in any fluid.

Pressure due to the weight of a fluid increases with depth because [latex]p=hpg[/latex]. This change in pressure and associated upward force on the bottom of the cylinder are greater than the downward force on the top of the cylinder. The differences in the force results in the buoyant force [latex]{F}_{\text{B}}[/latex]. (Horizontal forces cancel.) 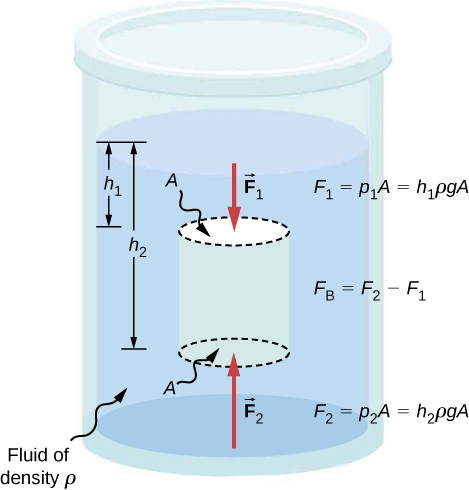 Just how large a force is buoyant force? To answer this question, think about what happens when a submerged object is removed from a fluid, as in (Figure). If the object were not in the fluid, the space the object occupied would be filled by fluid having a weight [latex]{w}_{\text{fl}}.[/latex] This weight is supported by the surrounding fluid, so the buoyant force must equal [latex]{w}_{\text{fl}},[/latex] the weight of the fluid displaced by the object.

The buoyant force on an object equals the weight of the fluid it displaces. In equation form, Archimedes’ principle is

This principle is named after the Greek mathematician and inventor Archimedes (ca. 287–212 BCE), who stated this principle long before concepts of force were well established.

The exclamation “Eureka” (meaning “I found it”) has often been credited to Archimedes as he made the discovery that would lead to Archimedes’ principle. Some say it all started in a bathtub. To read the story, visit NASA or explore Scientific American to learn more.

If you drop a lump of clay in water, it will sink. But if you mold the same lump of clay into the shape of a boat, it will float. Because of its shape, the clay boat displaces more water than the lump and experiences a greater buoyant force, even though its mass is the same. The same is true of steel ships.

The average density of an object is what ultimately determines whether it floats. If an object’s average density is less than that of the surrounding fluid, it will float. The reason is that the fluid, having a higher density, contains more mass and hence more weight in the same volume. The buoyant force, which equals the weight of the fluid displaced, is thus greater than the weight of the object. Likewise, an object denser than the fluid will sink.

The volume submerged equals the volume of fluid displaced, which we call [latex]{V}_{fl}[/latex]. Now we can obtain the relationship between the densities by substituting [latex]\rho =\frac{m}{V}[/latex] into the expression. This gives

We can use this relationship to measure densities.

Calculating Average Density
Suppose a 60.0-kg woman floats in fresh water with 97.0% of her volume submerged when her lungs are full of air. What is her average density?

for the density of the object. This yields

We know both the fraction submerged and the density of water, so we can calculate the woman’s density.

Solution
Entering the known values into the expression for her density, we obtain

Significance
The woman’s density is less than the fluid density. We expect this because she floats.

Numerous lower-density objects or substances float in higher-density fluids: oil on water, a hot-air balloon in the atmosphere, a bit of cork in wine, an iceberg in salt water, and hot wax in a “lava lamp,” to name a few. A less obvious example is mountain ranges floating on the higher-density crust and mantle beneath them. Even seemingly solid Earth has fluid characteristics.

One of the most common techniques for determining density is shown in (Figure).

(a) A coin is weighed in air. (b) The apparent weight of the coin is determined while it is completely submerged in a fluid of known density. These two measurements are used to calculate the density of the coin.

More force is required to pull the plug in a full bathtub than when it is empty. Does this contradict Archimedes’ principle? Explain your answer.

Not at all. Pascal’s principle says that the change in the pressure is exerted through the fluid. The reason that the full tub requires more force to pull the plug is because of the weight of the water above the plug.

Do fluids exert buoyant forces in a “weightless” environment, such as in the space shuttle? Explain your answer.

Will the same ship float higher in salt water than in freshwater? Explain your answer.

Marbles dropped into a partially filled bathtub sink to the bottom. Part of their weight is supported by buoyant force, yet the downward force on the bottom of the tub increases by exactly the weight of the marbles. Explain why.

A rock with a mass of 540 g in air is found to have an apparent mass of 342 g when submerged in water. (a) What mass of water is displaced? (b) What is the volume of the rock? (c) What is its average density? Is this consistent with the value for granite?

Archimedes’ principle can be used to calculate the density of a fluid as well as that of a solid. Suppose a chunk of iron with a mass of 390.0 g in air is found to have an apparent mass of 350.5 g when completely submerged in an unknown liquid. (a) What mass of fluid does the iron displace? (b) What is the volume of iron, using its density as given in (Figure)? (c) Calculate the fluid’s density and identify it.

What is the density of a woman who floats in fresh water with [latex]4.00\text{%}[/latex] of her volume above the surface? (This could be measured by placing her in a tank with marks on the side to measure how much water she displaces when floating and when held under water.) (b) What percent of her volume is above the surface when she floats in seawater?

What percentage of an iron anchor’s weight will be supported by buoyant force when submerged in salt water?