Pascal’s observations—since proven experimentally—provide the foundation for hydraulics, one of the most important developments in modern mechanical technology. Pascal observed that a change in pressure applied to an enclosed fluid is transmitted undiminished throughout the fluid and to the walls of its container. Because of this, we often know more about pressure than other physical quantities in fluids. Moreover, Pascal’s principle implies that the total pressure in a fluid is the sum of the pressures from different sources. A good example is the fluid at a depth depends on the depth of the fluid and the pressure of the atmosphere.

Note that this principle does not say that the pressure is the same at all points of a fluid—which is not true, since the pressure in a fluid near Earth varies with height. Rather, this principle applies to the change in pressure. Suppose you place some water in a cylindrical container of height H and cross-sectional area A that has a movable piston of mass m ((Figure)). Adding weight Mg at the top of the piston increases the pressure at the top by Mg/A, since the additional weight also acts over area A of the lid: 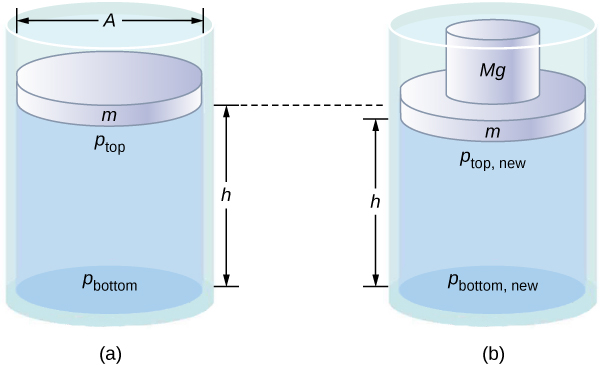 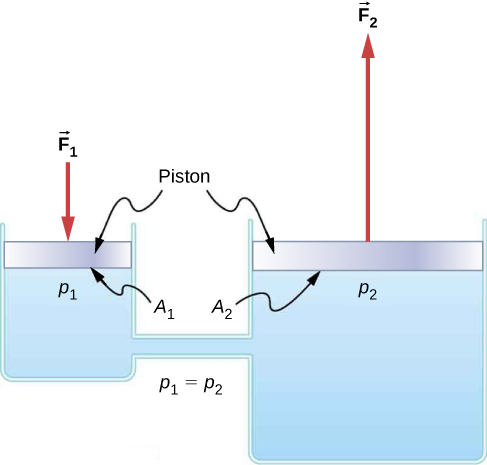 This equation relates the ratios of force to area in any hydraulic system, provided that the pistons are at the same vertical height and that friction in the system is negligible.

Hydraulic systems can increase or decrease the force applied to them. To make the force larger, the pressure is applied to a larger area. For example, if a 100-N force is applied to the left cylinder in (Figure) and the right cylinder has an area five times greater, then the output force is 500 N. Hydraulic systems are analogous to simple levers, but they have the advantage that pressure can be sent through tortuously curved lines to several places at once.

The hydraulic jack is such a hydraulic system. A hydraulic jack is used to lift heavy loads, such as the ones used by auto mechanics to raise an automobile. It consists of an incompressible fluid in a U-tube fitted with a movable piston on each side. One side of the U-tube is narrower than the other. A small force applied over a small area can balance a much larger force on the other side over a larger area ((Figure)).

(a) A hydraulic jack operates by applying forces [latex]\left({F}_{1}\text{,}\phantom{\rule{0.2em}{0ex}}{F}_{2}\right)[/latex] to an incompressible fluid in a U-tube, using a movable piston [latex]\left({A}_{1},{A}_{2}\right)[/latex] on each side of the tube. (b) Hydraulic jacks are commonly used by car mechanics to lift vehicles so that repairs and maintenance can be performed.

From Pascal’s principle, it can be shown that the force needed to lift the car is less than the weight of the car:

Hydraulic brakes use Pascal’s principle. The driver pushes the brake pedal, exerting a force that is increased by the simple lever and again by the hydraulic system. Each of the identical wheel cylinders receives the same pressure and, therefore, creates the same force output [latex]{F}_{2}[/latex]. The circular cross-sectional areas of the pedal and wheel cylinders are represented by [latex]{A}_{1}[/latex] and [latex]{A}_{2}[/latex], respectively. 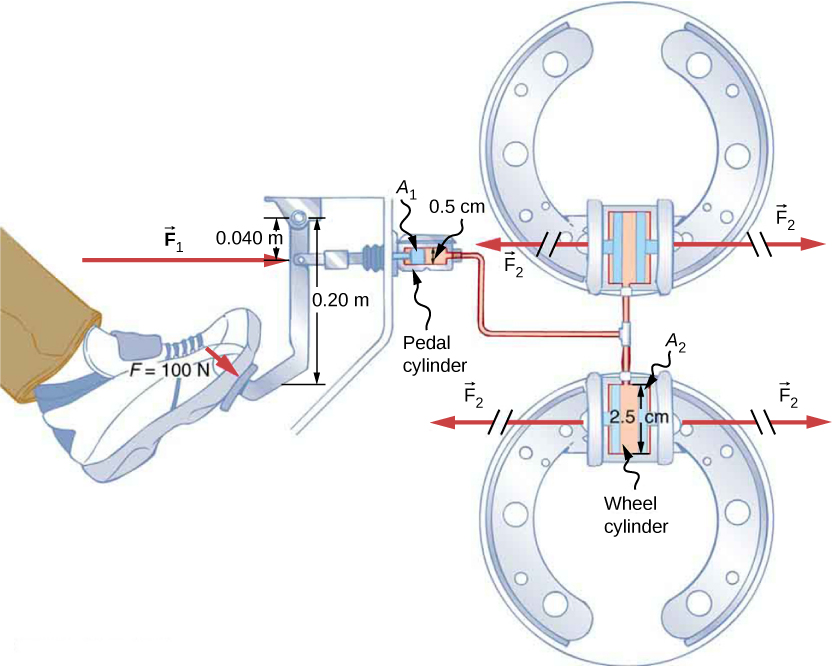 Manipulate this algebraically to get [latex]{F}_{2}[/latex] on one side and substitute known values.

Check Your Understanding Would a hydraulic press still operate properly if a gas is used instead of a liquid?

Yes, it would still work, but since a gas is compressible, it would not operate as efficiently. When the force is applied, the gas would first compress and warm. Hence, the air in the brake lines must be bled out in order for the brakes to work properly.

Suppose the master cylinder in a hydraulic system is at a greater height than the cylinder it is controlling. Explain how this will affect the force produced at the cylinder that is being controlled.

How much pressure is transmitted in the hydraulic system considered in (Figure)? Express your answer in atmospheres.

A host pours the remnants of several bottles of wine into a jug after a party. The host then inserts a cork with a 2.00-cm diameter into the bottle, placing it in direct contact with the wine. The host is amazed when the host pounds the cork into place and the bottom of the jug (with a 14.0-cm diameter) breaks away. Calculate the extra force exerted against the bottom if he pounded the cork with a 120-N force.

A certain hydraulic system is designed to exert a force 100 times as large as the one put into it. (a) What must be the ratio of the area of the cylinder that is being controlled to the area of the master cylinder? (b) What must be the ratio of their diameters? (c) By what factor is the distance through which the output force moves reduced relative to the distance through which the input force moves? Assume no losses due to friction.

Verify that work input equals work output for a hydraulic system assuming no losses due to friction. Do this by showing that the distance the output force moves is reduced by the same factor that the output force is increased. Assume the volume of the fluid is constant. What effect would friction within the fluid and between components in the system have on the output force? How would this depend on whether or not the fluid is moving?

If the system is not moving, the friction would not play a role. With friction, we know there are losses, so that [latex]{W}_{\text{o}}={W}_{\text{i}}-{W}_{\text{f}};[/latex] therefore, the work output is less than the work input. In other words, to account for friction, you would need to push harder on the input piston than was calculated.

hydrostatic equilibrium
state at which water is not flowing, or is static