By the end of the section, you will be able to:

Mass and weight are often used interchangeably in everyday conversation. For example, our medical records often show our weight in kilograms but never in the correct units of newtons. In physics, however, there is an important distinction. Weight is the pull of Earth on an object. It depends on the distance from the center of Earth. Unlike weight, mass does not vary with location. The mass of an object is the same on Earth, in orbit, or on the surface of the Moon.

When an object is dropped, it accelerates toward the center of Earth. Newton’s second law says that a net force on an object is responsible for its acceleration. If air resistance is negligible, the net force on a falling object is the gravitational force, commonly called its weight [latex]\stackrel{\to }{w}[/latex], or its force due to gravity acting on an object of mass m. Weight can be denoted as a vector because it has a direction; down is, by definition, the direction of gravity, and hence, weight is a downward force. The magnitude of weight is denoted as w. Galileo was instrumental in showing that, in the absence of air resistance, all objects fall with the same acceleration g. Using Galileo’s result and Newton’s second law, we can derive an equation for weight.

The gravitational force on a mass is its weight. We can write this in vector form, where [latex]\stackrel{\to }{w}[/latex] is weight and m is mass, as

In scalar form, we can write

Acceleration due to gravity g varies slightly over the surface of Earth, so the weight of an object depends on its location and is not an intrinsic property of the object. Weight varies dramatically if we leave Earth’s surface. On the Moon, for example, acceleration due to gravity is only [latex]{1.67\phantom{\rule{0.2em}{0ex}}\text{m/s}}^{2}[/latex]. A 1.0-kg mass thus has a weight of 9.8 N on Earth and only about 1.7 N on the Moon.

Be aware that weight and mass are different physical quantities, although they are closely related. Mass is an intrinsic property of an object: It is a quantity of matter. The quantity or amount of matter of an object is determined by the numbers of atoms and molecules of various types it contains. Because these numbers do not vary, in Newtonian physics, mass does not vary; therefore, its response to an applied force does not vary. In contrast, weight is the gravitational force acting on an object, so it does vary depending on gravity. For example, a person closer to the center of Earth, at a low elevation such as New Orleans, weighs slightly more than a person who is located in the higher elevation of Denver, even though they may have the same mass.

It is tempting to equate mass to weight, because most of our examples take place on Earth, where the weight of an object varies only a little with the location of the object. In addition, it is difficult to count and identify all of the atoms and molecules in an object, so mass is rarely determined in this manner. If we consider situations in which [latex]\stackrel{\to }{g}[/latex] is a constant on Earth, we see that weight [latex]\stackrel{\to }{w}[/latex] is directly proportional to mass m, since [latex]\stackrel{\to }{w}=m\stackrel{\to }{g},[/latex] that is, the more massive an object is, the more it weighs. Operationally, the masses of objects are determined by comparison with the standard kilogram, as we discussed in Units and Measurement. But by comparing an object on Earth with one on the Moon, we can easily see a variation in weight but not in mass. For instance, on Earth, a 5.0-kg object weighs 49 N; on the Moon, where g is [latex]{1.67\phantom{\rule{0.2em}{0ex}}\text{m/s}}^{2}[/latex], the object weighs 8.4 N. However, the mass of the object is still 5.0 kg on the Moon.

Strategy
We were given the weight of the stone, which we use in finding the net force on the stone. However, we also need to know its mass to apply Newton’s second law, so we must apply the equation for weight, [latex]w=mg[/latex], to determine the mass.

Solution
No forces act in the horizontal direction, so we can concentrate on vertical forces, as shown in the following free-body diagram. We label the acceleration to the side; technically, it is not part of the free-body diagram, but it helps to remind us that the object accelerates upward (so the net force is upward). 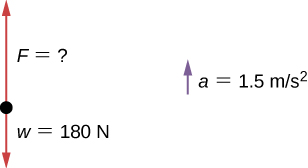 Significance
To apply Newton’s second law as the primary equation in solving a problem, we sometimes have to rely on other equations, such as the one for weight or one of the kinematic equations, to complete the solution.

Check Your Understanding For (Figure), find the acceleration when the farmer’s applied force is 230.0 N.

Can you avoid the boulder field and land safely just before your fuel runs out, as Neil Armstrong did in 1969? This version of the classic video game accurately simulates the real motion of the lunar lander, with the correct mass, thrust, fuel consumption rate, and lunar gravity. The real lunar lander is hard to control.

Use this interactive simulation to move the Sun, Earth, Moon, and space station to see the effects on their gravitational forces and orbital paths. Visualize the sizes and distances between different heavenly bodies, and turn off gravity to see what would happen without it.

What is the relationship between weight and mass? Which is an intrinsic, unchanging property of a body?

How much does a 70-kg astronaut weight in space, far from any celestial body? What is her mass at this location?

The astronaut is truly weightless in the location described, because there is no large body (planet or star) nearby to exert a gravitational force. Her mass is 70 kg regardless of where she is located.

Which of the following statements is accurate?

(a) Mass and weight are the same thing expressed in different units.

(b) If an object has no weight, it must have no mass.

(c) If the weight of an object varies, so must the mass.

When you stand on Earth, your feet push against it with a force equal to your weight. Why doesn’t Earth accelerate away from you?

How would you give the value of [latex]\stackrel{\to }{g}[/latex] in vector form?

The weight of an astronaut plus his space suit on the Moon is only 250 N. (a) How much does the suited astronaut weigh on Earth? (b) What is the mass on the Moon? On Earth?

Repeat the previous problem for a situation in which the rocket sled decelerates at a rate of [latex]{201\phantom{\rule{0.2em}{0ex}}\text{m/s}}^{2}[/latex]. In this problem, the forces are exerted by the seat and the seat belt.

A body of mass 2.00 kg is pushed straight upward by a 25.0 N vertical force. What is its acceleration?

A fireman has mass m; he hears the fire alarm and slides down the pole with acceleration a (which is less than g in magnitude). (a) Write an equation giving the vertical force he must apply to the pole. (b) If his mass is 90.0 kg and he accelerates at [latex]5.00\phantom{\rule{0.2em}{0ex}}{\text{m/s}}^{2},[/latex] what is the magnitude of his applied force?

A baseball catcher is performing a stunt for a television commercial. He will catch a baseball (mass 145 g) dropped from a height of 60.0 m above his glove. His glove stops the ball in 0.0100 s. What is the force exerted by his glove on the ball? 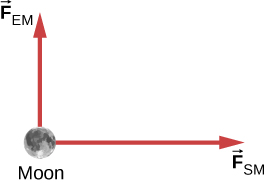