The deeper we got into the ALN project, and the more we created, the more the project expanded. This ALN Final Report, with many embedded interviews, describes this in detail. Sometimes we chastised each other – our colleagues on the ALN team – for “scope creep”. There is no doubt the project expanded and became more complicated.

Because as the previous “lesson” reminds us, we undertook this project in the period 2018-2022 when the daily update of accelerating climate emergency was being documented by the IPCC and in the news accounts of the frequent impacts from extreme weather events and climate-fueled disasters around the world. And this was like having hot caffeine in our veins – we were highly motivated to make things happen.

Because we knew that creating a Climate Adaptation Competency Framework on its own, without a way to recognize those competencies (e.g. through a micro-credential strategy), would be a lost opportunity in contributing to climate adaptation workforce development..

Because we recognized that developing courses as Open Education Resources was the right thing to do, to maximize the reach and impact of this critical climate adaptation information, but we underestimated the effort required to do this well, which required us to become Creative Commons consultants to six different continuing studies university communities!

And because we were transferring lessons-learned, even before they had been fully “learned”, from the ALN project (focused on development of climate action continuing studies courses), into the development of the Royal Roads University Master of Arts in Climate Action Leadership. This concurrent effort in scaling up climate adaptation capacity-building was a significant effort.

There are many more examples of our “scope creep”.  As the project ends, we can now celebrate this reality, instead of apologizing for it.

Here is what the ALN project looks like in a Gantt-chart, an historical view that makes it all seem so straight-forward! Embedded in each “action” were many complexities. What is missing on this Gantt-chart is all the things we could not do. 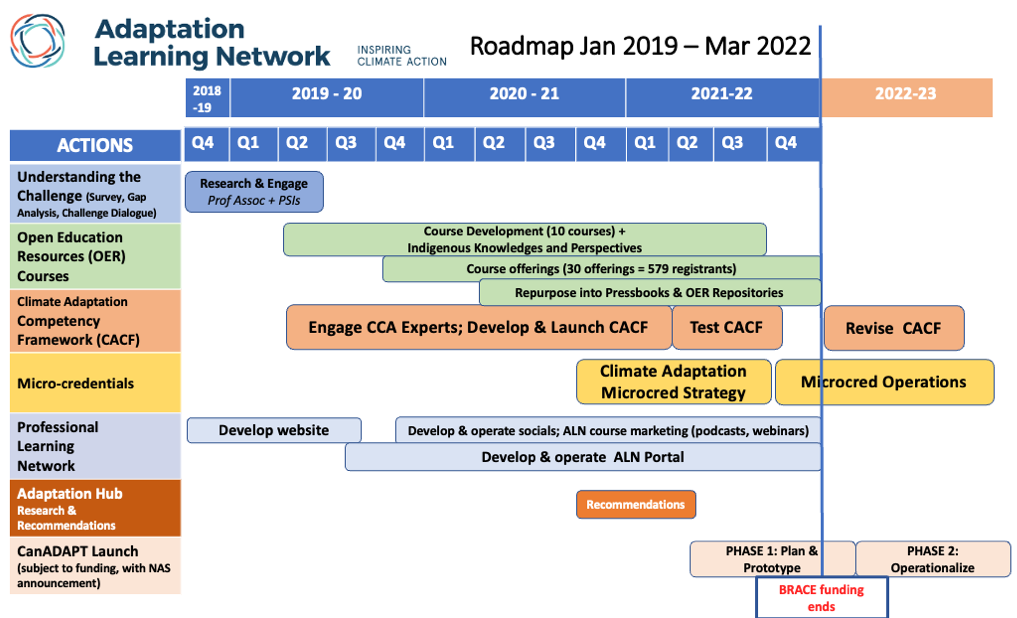 For example, we did not initiate the project with a formal “theory of change” that could be evaluated for theory-to-practice reflection and data analysis at the end of the project. Instead we dived into what we understood climate adaptation capacity-building to mean, based on a Logic Model we developed.

Instead, we immediately jumped into undertaking a gap analysis on professional development and training options; set up research interviews on adaptation competencies; and initiated a Challenge Dialogue Process to tease out a collective approach to moving forward that would be informed by professional association members and post-secondary institutions. By Month 4 (April 2019) we were already feeling the pressure of getting underway with developing a portfolio of courses, knowing the significant effort that is required to build good courses.

Observation: In an ideal world, we might have identified early in the project better ways-and-means to identify and track the perceptions-change, acquisition of new competencies, and subsequent climate actions of the 576 working professionals who took ALN courses.  We realized about 10 months into the project that university protocols for protection-of-student-privacy were going to inhibit our ability to connect with students for course feedback. Ideally, we would have liked to line-up a process for capturing data through recurring surveys about 6 months after each course cohort completed, with questions on “what were you able to do with your new climate adaptation knowledge, and skills?” What we did as a workaround was have a pop-up screen in each ALN online course instance, inviting people to sign up for the ALN newsletter. This increased our network effect, but it was insufficient to be able to mobilize survey efforts to capture student competencies coming into a course, their competencies at the end of the course, and then survey the students 6-months after the course completed to capture the students’ climate actions and results.