It’s impossible to be strategic about developing capacity for climate adaptation if you don’t know what knowledge, skills and behaviours people require to be able to anticipate and reduce the impact of climate change.

That’s why we included the development of the first Climate Adaptation Competency Framework (CACF) as one of our three key deliverables for the project. Even though the Resilience by Design Lab had worked on competency frameworks before, previous efforts focused on much more specific fields, and we did not anticipate how big and complex this work would be.

In simple terms, a competency framework describes the knowledge, skills and behaviours one needs to perform a specific role or job.

As we saw in the Discovery chapter, we spent the first half of 2019 doing some initial research to identify what resources already existed for climate adaptation competency development, so we could build on those findings to articulate an initial set of core competencies. We did a Gap Analysis, a Survey a Challenge Dialogue, and we also interviewed climate adaptation experts from across the globe. 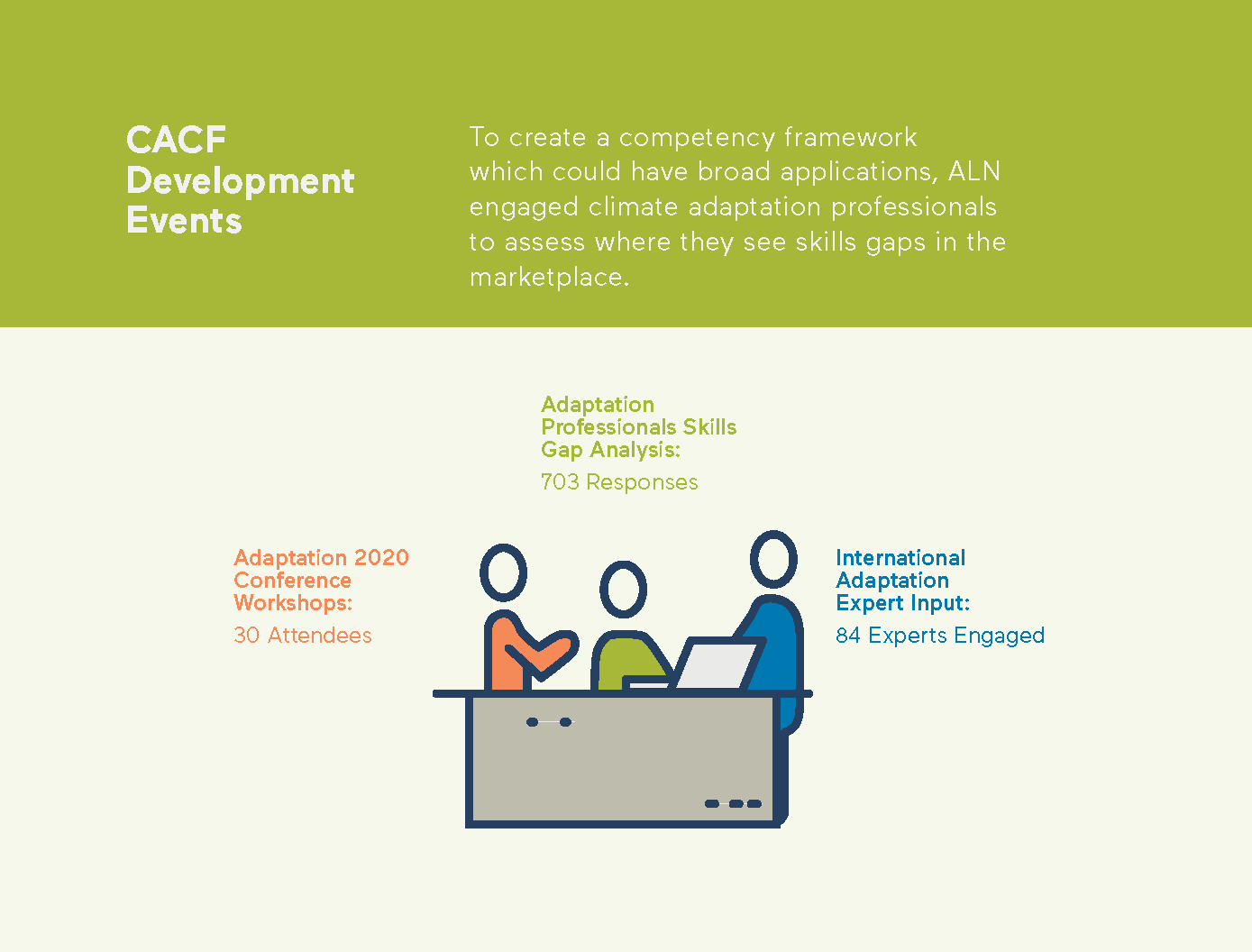 Once we had done this initial gathering of intel, the immense scope of this undertaking started to become clear, and we realized we needed help. So we brought Susanna Niederer onto the project, as she had worked on similar challenges through her climate adaptation role at the City of Calgary. She pulled all of the findings from our discovery work into a first draft, which we then tested with our partners and stakeholders at two workshops at Adaptation2020 in February 2020 in Vancouver.

We received positive feedback on this initial draft. However, the group was so engaged and so generous in sharing their knowledge, that we realized the framework would be much better if we could incorporate their additional ideas.

We juggled our budget again to find a way to add Lynn Sikorski, a skills management framework expert who previously developed the asset management competency framework for Canadian municipalities, to the project.

At this point, we knew that we didn’t just want to create a framework. We wanted to be sure that what we built:

While we were doing all this, the educational landscape shifted. A new initiative for Open Competency Frameworks began to emerge. We realized that it would be essential for the CACF to work as an Open tool. So we began to explore how best to weave this requirement into our work.

That’s when we discovered a mismatch between the Open Competency Framework structure we wanted to use, and the one embedded in the software being developed by Ibbaka. Recognizing that this would take additional effort and budget, we pivoted our plans and decided to launch a paper-based, beta version of the CACF early in 2021 which would allow us to get feedback while continuing to work with Ibbaka to integrate Open Competency Framework standards and functions into their product.

Early in 2021, we launched the draft Climate Adaptation Competency Framework with a series of webinars, publications and a social media campaign. 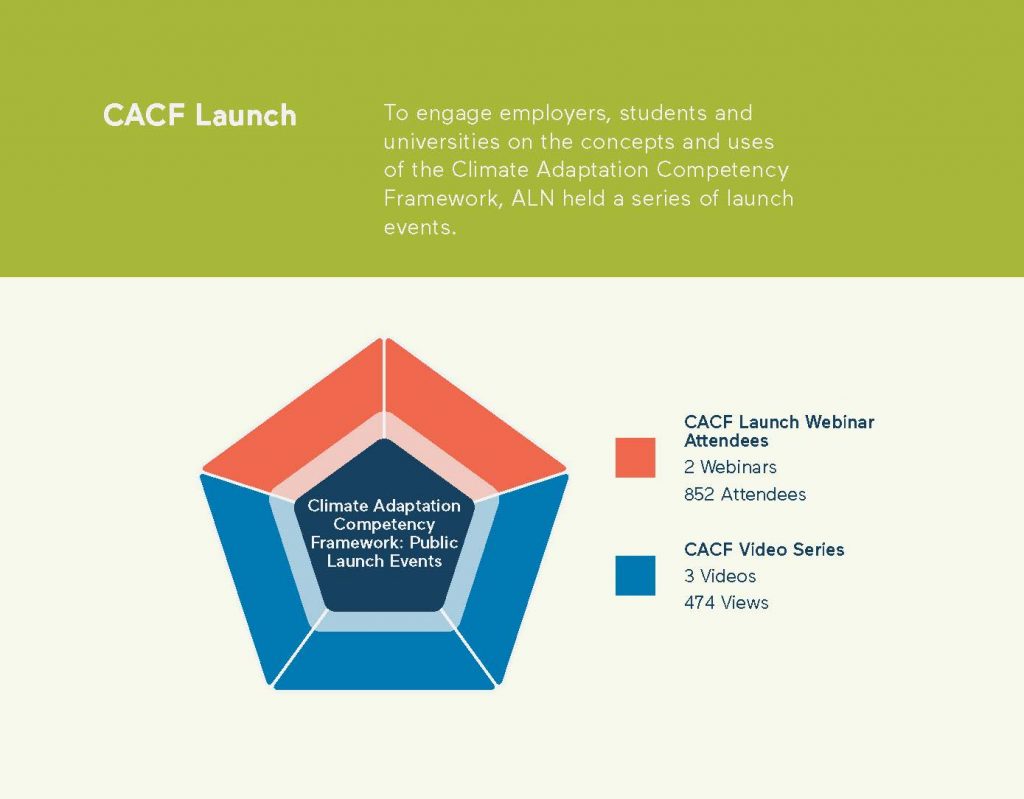 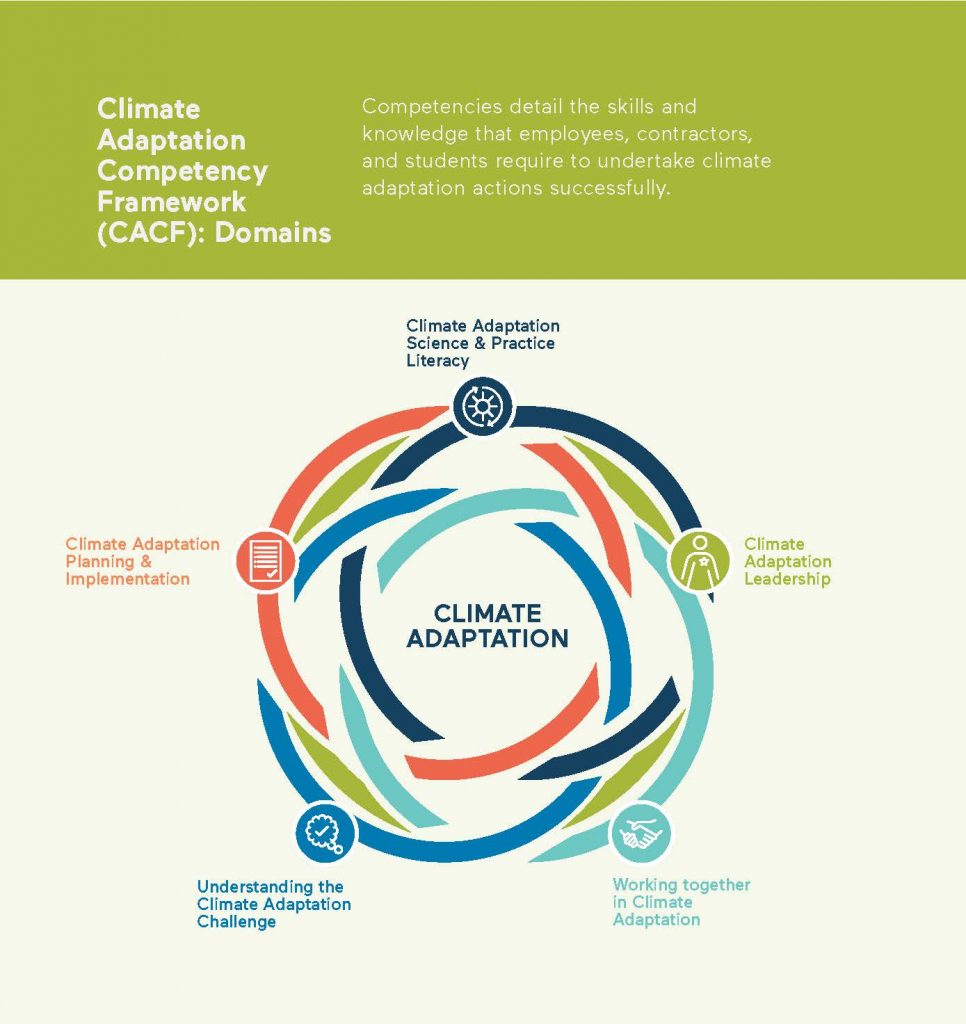 The first version of the CACF also includes additional references and tools like role descriptions and a planning roadmap to help employers, educators and learning designers to help match skills to jobs and training for the future workforce.

Response to the initial framework was overwhelmingly positive. And while that’s gratifying, it also helped us see how much more work still needed to be done, to turn this into a tool that could be used across multiple contexts and communities.

As we began sharing the CACF with partners and communities, we realized that developing competencies wasn’t enough. We also needed a way to assess, manage and accredit these new competencies. We began working on a micro-credential strategy to address that gap.

We also discovered that we needed to know more about how organizations could use the framework – in particular, municipalities and the consulting firms who work with municipalities. They are the organizations that have to deal with everything from storm surges to heat domes, yet typically have the fewest resources to do this work.

We arranged to test the CACF with an environmental consulting firm that works with regional governments, industry and other clients in Vancouver. While this work is ongoing, it appears that this firm found the CACF particularly useful as a way to figure out where and how they need to invest in capacity-building for individual employees, and as an organization. 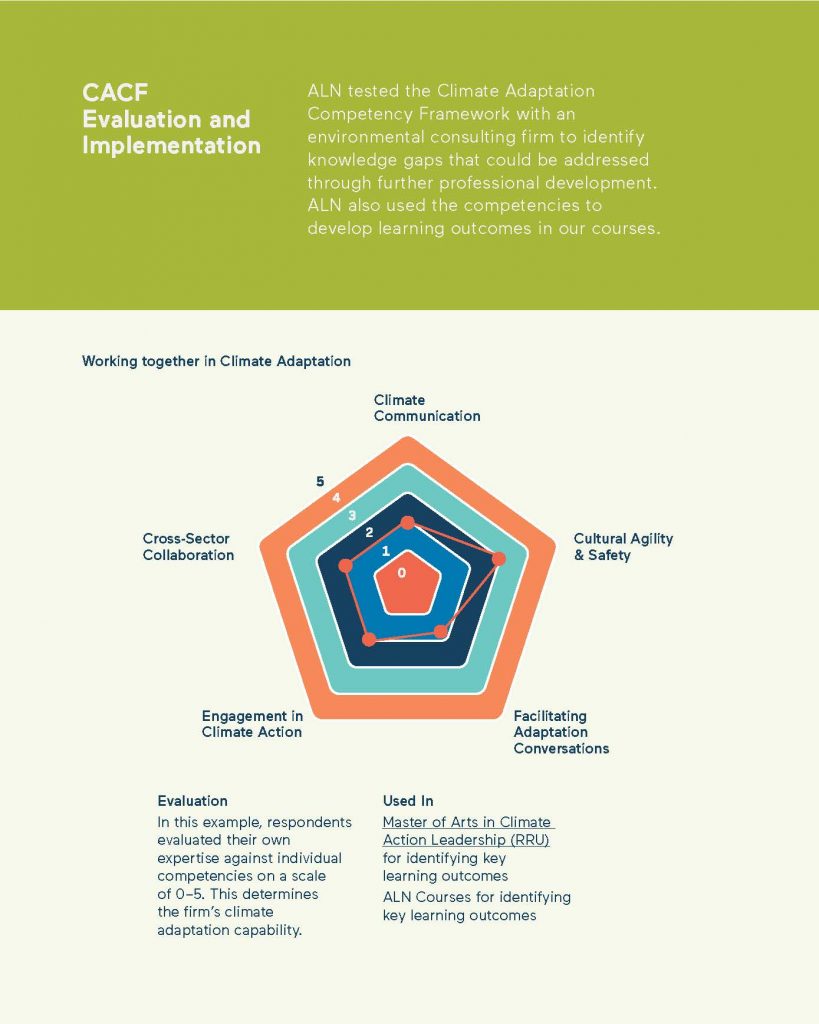 To support the ongoing evolution of the CACF, the ALN project team continued to work with other organizations, which include the Climate Risk Institute and the American Society of Adaptation Professionals, with the intention of identifying use cases and moving the CACF into wider integration with both organizational and learning design requirements.

Both the challenge and potential of the CACF have exploded far beyond our initial expectations. Climate adaptation is a complex process that cuts across domains, sectors, roles and industries. Trying to squeeze it all into a single framework meant making difficult sacrifices and compromises. At the same time, producing an online version that was easy for employers and educators to use, amid a dizzying array of technical specifications and standards, added a layer of complexity we never imagined.

That said, those who have had the opportunity to apply to Climate Adaptation Competency Framework to their work have already recognized its potential in helping them identify gaps and opportunities to take the lead in their field by investing in capacity-building in this area.

Given the positive response from all levels of government, industry, education organizations and the international climate adaptation community, we’re hopeful we’ll be able to continue this work of linking climate adaptation competencies to workforce development objectives, through various new collaborations in the coming years.