If you look ahead in this chapter and in other resources at the way organic compounds are drawn, you will see that the figures are somewhat different from the Lewis structures you are used to seeing in your general chemistry book. In some sources,  you will see condensed structures for smaller molecules instead of full Lewis structures:

Determine the Lewis Structure of the following condensed structure of oleic acid, a fatty acid that is found naturally in various animal and vegetable fats and oils.

Start by drawing the CH3. The (CH2)7 represents a repeating unit, meaning you must draw seven CH2‘s one after another, which are bonded to a CH which is bonded to a CH, and then another seven CH2‘s.  The COOH represent a carboxylic acid, which means you have a C=O connected to an O-H.  Always double check your structure to ensure every carbon is making four bonds.  When you do this, you will see the two CH must be double bonded.

Test Yourself
Common organic compounds that you likely have at home are: acetone (CH3COCH3) found in nail polish remover, acetic acid (CH3COOH) found in vinegar, and isopropanol ((CH3)2CHOH) found in rubbing alcohol. Determine the Lewis Structure for each of these household chemicals.

More commonly, organic and biological chemists use an abbreviated drawing convention called line structures, also known as skeletal structures or line bond structures.  The convention is quite simple and makes it easier to draw molecules, but line structures do take a little bit of getting used to. Carbon atoms are depicted not by a capital C, but by a ‘corner’ between two bonds, or a free end of a bond. Open-chain molecules are usually drawn out in a ‘zig-zig’ shape. Hydrogens attached to carbons are generally not shown: rather, like lone pairs, they are simply implied (unless a positive formal charge is shown, all carbons are assumed to have a full octet of valence electrons). Hydrogens bonded to nitrogen, oxygen, sulfur, or anything other than carbon are shown, but are usually drawn without showing the bond. The following examples illustrate the convention.

As you can see, the ‘pared down’ line structure makes it much easier to see the basic structure of the molecule and the locations where there is something other than C-C and C-H single bonds.  For larger, more complex biological molecules, it becomes impractical to use full Lewis structures.  Conversely, very small molecules such as ethane should be drawn with their full Lewis or condensed structures.

Sometimes, one or more carbon atoms in a line structure will be depicted with a capital C, if doing so makes an explanation easier to follow. If you label a carbon with a C, you also must draw in the hydrogens for that carbon.

Draw the line structures for these two molecules:

Solution
Each carbon atom is converted into the end of a line or the place where lines intersect. All hydrogen atoms attached to the carbon atoms are left out of the structure (although we still need to recognize they are there):

Test Yourself
Draw the line structures for these two molecules:

Identify the chemical formula of the molecule represented here:

Location of the hydrogen atoms:

Test Yourself
Identify the chemical formula of the molecule represented here:

At each corner or intersection of lines or end of a line, add a C:

Each C makes fours bonds.  If some are not visible, then add a bond to H for each bonds missing. Also show the bond between the O’s and H’s.

Test Yourself
Determine the Lewis Structure of the following line structure of acetaminophen, the pain and fever medicine found in Tylenol.

1. Draw the line bond structure for the following compounds:

2. For the following compounds,give the chemical formula and the condensed structure: 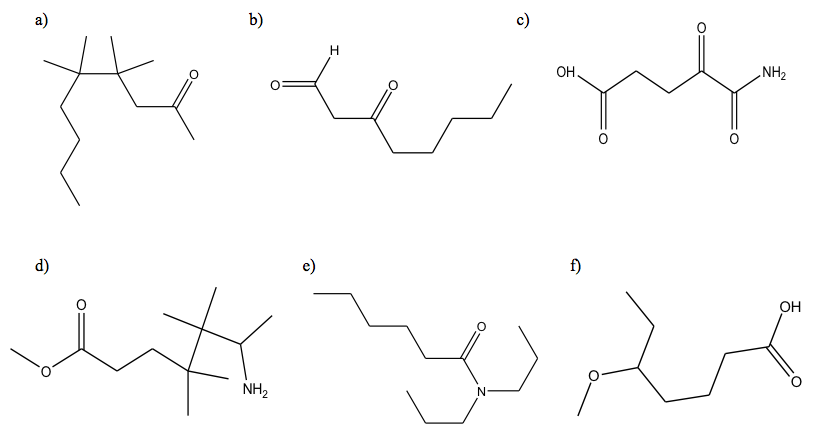 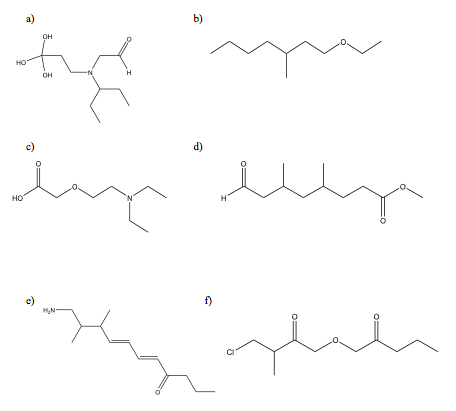 CHEM 1114 - Introduction to Chemistry by Shirley Wacowich-Sgarbi is licensed under a Creative Commons Attribution-NonCommercial-ShareAlike 4.0 International License, except where otherwise noted.