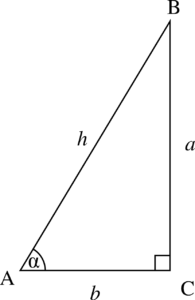 We can use the following two concepts to solve the length of the triangle’s side and the angle at the corners: