To operate the MC-90 ship model fully loaded on “At sea” mode and compare the NOx and SOx emissions when the plant is operating with :

NOx: What is it? Where does it come from?

Nitrogen oxides (NOx), are the generic term for a group of highly reactive gases, all of which contain nitrogen and oxygen in varying amounts. Many of the nitrogen oxides are colorless and odorless. However, one common pollutant, nitrogen dioxide (NO2) along with particles in the air can often be seen as a reddish-brown layer over many densely populated industrial and urban areas.
Nitrogen oxides form when fuel is burned at high temperatures, as in a combustion process in a Marine Diesel Engines. The primary sources of NOx are ships, motor vehicles, electric utilities, and other industrial, commercial, and residential sources that burn fuels.
Advances in thermal efficiency have directly contributed to a rise in NOx emission. Dominating factors in the formation of NOx are temperature and oxygen concentration – the higher the temperature and the higher the residence time at the high temperature in the cylinder the greater the amount of NOx that will be generated. A longer combustion time span means that the low speed engines generate more NOx than medium or high speed engines.

NOx and the pollutants formed from NOx can be transported over long distances, following the pattern of prevailing winds. This means that problems associated with NOx are not confined to areas where NOx are emitted. Therefore, controlling NOx is often most effective if done from a regional perspective, rather than focusing on sources in one local area.
NOx emissions are increasing and since 1970, EPA has tracked emissions of the six principal air pollutants – carbon monoxide, lead, nitrogen oxides, particulate matter, sulfur dioxide, and volatile organic compounds. Emissions of all of these pollutants have decreased significantly except for NOx which has increased approximately 10 percent over this period.

Ground-level Ozone (Smog) – is formed when NOx and volatile organic compounds (VOCs) react in the presence of heat and sunlight. Children, people with lung diseases such as asthma, and people who work or exercise outside are susceptible to adverse effects such as damage to lung tissue and reduction in lung function. Ozone can be transported by wind currents and cause health impacts far from original sources. Millions of people live in areas that do not meet the health standards for ozone. Other impacts from ozone include damaged vegetation and reduced crop yields

Acid Rain – NOx and sulfur dioxide react with other substances in the air to form acids which fall to earth as rain, fog, snow or dry particles. Some may be carried by wind for hundreds of miles. Acid rain damages; causes deterioration of cars, buildings and historical monuments; and causes lakes and streams to become acidic and unsuitable for many fish.

Particles – NOx reacts with ammonia, moisture, and other compounds to form nitric acid and related particles. Human health concerns include effects on breathing and the respiratory system, damage to lung tissue, and premature death. Small particles penetrate deeply into sensitive parts of the lungs and can cause or worsen respiratory disease such as emphysema and bronchitis, and aggravate existing heart disease.

Water Quality Deterioration – Increased nitrogen loading in water bodies, particularly coastal estuaries, upsets the chemical balance of nutrients used by aquatic plants and animals. Additional nitrogen accelerates “eutrophication,” which leads to oxygen depletion and reduces fish and shellfish populations. NOx emissions in the air are one of the largest sources of nitrogen pollution in the Chesapeake Bay.

Global Warming – One member of the Nitrous oxide (NOx), is a greenhouse gas. It accumulates in the atmosphere with other greenhouse gasses causing a gradual rise in the earth’s temperature. This will lead to increased risks to human health, a rise in the sea level, and other adverse changes to plant and animal habitat.

Toxic Chemicals – In the air, NOx reacts readily with common organic chemicals and even ozone, to form a wide variety of toxic products, some of which may cause biological mutations. Examples of these chemicals include the nitrate radical, nitroarenes, and nitrosamines.

Visibility Impairment – Nitrate particles and nitrogen dioxide can block the transmission of light, reducing visibility in urban areas and on a regional scale in national parks.

Regulations applying to the Marine industry:

The Marpol Protocol of 1997 (Annex VI – Regulations for the Prevention of Air Pollution from Ships).  Adoption: 26 September 1997

“Subject to the provision of regulation 3 of this Annex, the operation of each diesel engine to which this regulation applies is prohibited, except when the emission of nitrogen oxides (calculated as the total weighted emission of NO2) from the engine is within the following limits:

Limits for NOx Emission from a Merchant Vessel 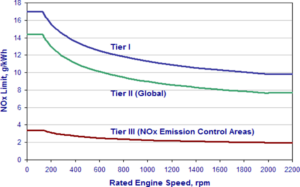 For ships fitted with NOx certified engines, replacement of NOx critical components must be logged as required. Record book of Engine parameters must be completed, even for smaller changes. The approved Technical File must be on-board for inspection when requested.The direct measurement and monitoring method is an alternative way to demonstrate compliance.
Methods for Reducing NOx Emissions
The primary problems with controlling NOx emissions within the engine itself is that it is a natural byproduct of the combustion process, and linked to the formation of CO2 and particulates (unburnt fuel).  The higher the combustion temperature, the more fuel is burned, and the lower the CO2 and particulates, but the reaction with the nitrogen is greater, producing more NOx gases.The methods  recommended by Engine manufacturers are:

This ship is fitted with two options for reducing NOx

1.Selective Catalytic Reduction unit which treats the exhaust gases before they enter the turbocharger. Pre-programmed quantity of Ammonia is added to the exhaust gas stream, and the mixture passed through a  catalyst at a temperature between 300°C and 400°C. Within the SCR Reactor the hot exhaust gases containing  NOx  gases are mixed with the ammonia stream. This reduces the NOx to N2 and H2O.
If the temperature of reaction is too high (above 490°C), the ammonia burns and does not react, and at low temperatures (below 250°C) the reaction rate is low and the catalyst can be damaged therefore the SCR is not used for lower engine RPMs

2. Fuel water emulsion situated between the fuel oil meter and the venting box is the Fuel-Water Emulsion Control Unit which is designed for emulsification of the fuel to reduce the NOx values in the exhaust gas from the engines.

Sulphur oxides (SOx) are the generic term for Sulphur dioxide (SO2) and sulphur trioxide (SO3). The sulfur oxides emission in the Diesel Engine exhaust gases is due to the presence of Sulphur in the marine fuels used on Ships. Better the grade of the fuel the lower will be the sulfur content as it is removed by refining of the fuel. All sulphur entering the engine combustion chamber is oxidized forming SOx, which is emitted to the atmosphere with the exhaust gases. The sulphur absorbed by the alkaline cylinder lubricant being negligible the SOx emissions from the engine are directly proportional to the fuel sulphur content and fuel consumption.
For regulatory purposes the sulphur oxides concentration in the Engine exhaust gases are generally calculated from the sulphur content of the fuel, as its physical measurement is challenging and expensive.

Based on the natural alkalinity of seawater,the open-loop system uses sea water to scrub and neutralize the SO2  in the exhaust gases in the scrubber tower. After scrubbing, this water is discharged into the sea, however, this can cause secondary pollution and contribute to the greenhouse effect due to the release of carbon dioxide. Furthermore, it has high energy consumption.
The closed-loop system uses fresh water or seawater as the scrubbing liquid dosed with caustic soda (NaOH)  as the absorbent to remove SO2 in exhaust gases. This system removes 95% of SOx has low energy consumption, and eliminates CO2 emissions as by product. The scrubbing water with dissolved SOx is sent to a water treatment effluent emulsion breaking plant after which it can be discharged overboard or pumped ashore .

Limits for SOx Emission from a Merchant Vessel

Suggested pen recorder variables that need to be plotted and monitored are:

Tabulate your data as shown below: 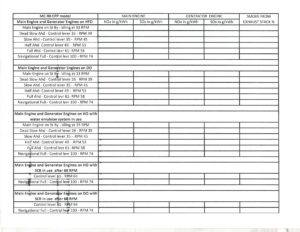 Your lab report is to include the following:

Marine Propulsion Plant Simulator by sanjeev sarwal is licensed under a Creative Commons Attribution-NonCommercial 4.0 International License, except where otherwise noted.