1: How does the equivalence principle lead us to suspect that spacetime might be curved?

2: If general relativity offers the best description of what happens in the presence of gravity, why do physicists still make use of Newton’s equations in describing gravitational forces on Earth (when building a bridge, for example)?

4: If a black hole itself emits no radiation, what evidence do astronomers and physicists today have that the theory of black holes is correct?

6: A student becomes so excited by the whole idea of black holes that he decides to jump into one. It has a mass 10 times the mass of our Sun. What is the trip like for him? What is it like for the rest of the class, watching from afar?

8: What is a gravitational wave and why was it so hard to detect?

9: What are some strong sources of gravitational waves that astronomers hope to detect in the future?

10: Suppose the amount of mass in a black hole doubles. Does the event horizon change? If so, how does it change?

11: Imagine that you have built a large room around the people in the image shown below, reproduced from earlier in the chapter, and that this room is falling at exactly the same rate as they are. Galileo showed that if there is no air friction, light and heavy objects that are dropping due to gravity will fall at the same rate. Suppose that this were not true and that instead heavy objects fall faster. Also suppose that the man in shown below is twice as massive as the woman. What would happen? Would this violate the equivalence principle? 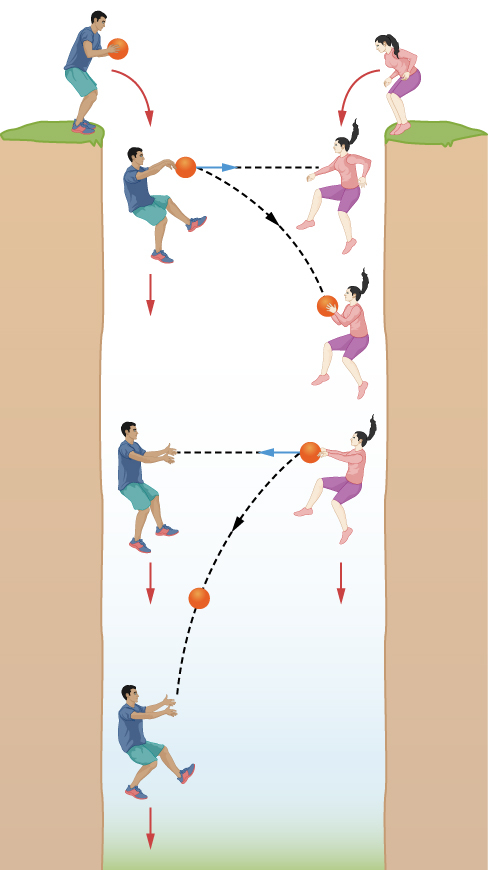 12: A monkey hanging from a tree branch sees a hunter aiming a rifle directly at him. The monkey then sees a flash and knows that the rifle has been fired. Reacting quickly, the monkey lets go of the branch and drops so that the bullet can pass harmlessly over his head. Does this act save the monkey’s life? Why or why not? (Hint: Consider the similarities between this situation and that of the question above).   Here is a video of this situation.  No real monkeys were harmed.  Direct link:  https://youtu.be/0jGZnMf3rPo

13: Why would we not expect to detect X-rays from a disk of matter about an ordinary star?

14: Look elsewhere in this book for necessary data, and indicate what the final stage of evolution—white dwarf, neutron star, or black hole—will be for each of these kinds of stars.

15: Which is likely to be more common in our Galaxy: white dwarfs or black holes? Why?

16: If the Sun could suddenly collapse to a black hole, how would the period of Earth’s revolution about it differ from what it is now?

17: Suppose the people in the equivalence picture shown in the chapter, and in the earlier question and reproduced below here in a smaller size, are in an elevator moving upward with an acceleration equal to g, but in the opposite direction. The woman throws the ball to the man with a horizontal force. What happens to the ball? 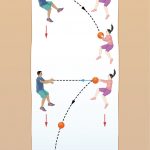 18: You arrange to meet a friend at 5:00 p.m. on Valentine’s Day on the observation deck of the Empire State Building in New York City. You arrive right on time, but your friend is not there. She arrives 5 minutes late and says the reason is that time runs faster at the top of a tall building, so she is on time but you were early. Is your friend right? Does time run slower or faster at the top of a building, as compared with its base? Is this a reasonable excuse for your friend arriving 5 minutes late?

19: You are standing on a scale in an elevator when the cable snaps, sending the elevator car into free fall. Before the automatic brakes stop your fall, you glance at the scale reading. Does the scale show your real weight? An apparent weight? Something else?

21: Suppose you wanted to know the size of black holes with masses that are larger or smaller than the Sun. You could go through all the steps in the question above wrestling with a lot of large numbers with large exponents. You could be clever, however, and evaluate all the constants in the equation once and then simply vary the mass. You could even express the mass in terms of the Sun’s mass and make future calculations really easy. Show that the event horizon equation is equivalent to saying that the radius of the event horizon is equal to 3 km times the mass of the black hole in units of the Sun’s mass.

22: Use the result from from the question above to calculate the radius of a black hole with a mass equal to: the Earth, a B0-type main-sequence star, a globular cluster, and the Milky Way Galaxy. Look elsewhere in this text and the appendixes for tables that provide data on the mass of these four objects.   (Answer.  The Earth would be a black hole with a radius of 8.86 x 10-3 m, or about the size of your thumbnail. )

23: Since the force of gravity a significant distance away from the event horizon of a black hole is the same as that of an ordinary object of the same mass, Kepler’s third law is valid. Suppose that Earth collapsed to the size of a golf ball. What would be the period of revolution of the Moon, orbiting at its current distance of 400,000 km? Use Kepler’s third law to calculate the period of revolution of a spacecraft orbiting at a distance of 6000 km.

Douglas College Astronomy 1105 by Douglas College Department of Physics and Astronomy, Open Stax is licensed under a Creative Commons Attribution 4.0 International License, except where otherwise noted.