Chapter 28 The Evolution and Distribution of Galaxies

1: How are distant (young) galaxies different from the galaxies that we see in the universe today?

2: What is the evidence that star formation began when the universe was only a few hundred million years old?

5: Describe the organization of galaxies into groupings, from the Local Group to superclusters.

6: What is the evidence that a large fraction of the matter in the universe is invisible?

7: When astronomers make maps of the structure of the universe on the largest scales, how do they find the superclusters of galaxies to be arranged?

8: How does the presence of an active galactic nucleus in a starburst galaxy affect the starburst process?

9: Describe how you might use the colour of a galaxy to determine something about what kinds of stars it contains.

10: Suppose a galaxy formed stars for a few million years and then stopped (and no other galaxy merged or collided with it). What would be the most massive stars on the main sequence after 500 million years? After 10 billion years? How would the colour of the galaxy change over this time span? (Refer to Evolution from the Main Sequence to Red Giants.)

12: Can an elliptical galaxy evolve into a spiral? Explain your answer. Can a spiral turn into an elliptical? How?

13: If we see a double image of a quasar produced by a gravitational lens and can obtain a spectrum of the galaxy that is acting as the gravitational lens, we can then put limits on the distance to the quasar. Explain how.

15: Suppose you are standing in the centre of a large, densely populated city that is exactly circular, surrounded by a ring of suburbs with lower-density population, surrounded in turn by a ring of farmland. From this specific location, would you say the population distribution is isotropic? Homogeneous?

16: Astronomers have been making maps by observing a slice of the universe and seeing where the galaxies lie within that slice. If the universe is isotropic and homogeneous, why do they need more than one slice? Suppose they now want to make each slice extend farther into the universe. What do they need to do?

17: Human civilization is about 10,000 years old as measured by the development of agriculture. If your telescope collects starlight tonight that has been traveling for 10,000 years, is that star inside or outside our Milky Way Galaxy? Is it likely that the star has changed much during that time?

18: Given that only about 5% of the galaxies visible in the Hubble Deep Field are bright enough for astronomers to study spectroscopically, they need to make the most of the other 95%. One technique is to use their colours and apparent brightnesses to try to roughly estimate their redshift. How do you think the inaccuracy of this redshift estimation technique (compared to actually measuring the redshift from a spectrum) might affect our ability to make maps of large-scale structures such as the filaments and voids shown in the Sloan Digital Survey shown in this earlier section and reproduced in thumbnail size below?

19: Using the information from the example about galaxy distribution in the earlier section, 28.3, how much fainter an object will you have to be able to measure in order to include the same kinds of galaxies in your second survey? Remember that the brightness of an object varies as the inverse square of the distance.  The first survey was of a sphere of 30 million light years in radius and the second survey was of a sphere with a radius of 60 million light years or twice the radius.

20: Using the information from the example about galaxy distribution in the earlier section, 28.3, if galaxies are distributed homogeneously, how many times more of them would you expect to count on your second survey?  The first survey was of a sphere of 30 million light years in radius and the second survey was of a sphere with a radius of 60 million light years or twice the radius.     The example shows you how to calculate the increase in volume.  Hint:  If the volume was twice as big you would see two times more galaxies.

21: Using the information from the example about galaxy distribution in the earlier section, 28.3, how much longer will it take you to do your second survey? The first survey was of a sphere of 30 million light years in radius and the second survey was of a sphere with a radius of 60 million light years or twice the radius.  Assume that the instrument you are using stays the same — it keeps counting galaxies at the same rate.

22: Galaxies are found in the “walls” of huge voids; very few galaxies are found in the voids themselves. The text says that the structure of filaments and voids has been present in the universe since shortly after the expansion began 13.8 billion years ago. In science, we always have to check to see whether some conclusion is contradicted by any other information we have. In this case, we can ask whether the voids would have filled up with galaxies in roughly 14 billion years. Observations show that in addition to the motion associated with the expansion of the universe, the galaxies in the walls of the voids are moving in random directions at typical speeds of 300 km/s. At least some of them will be moving into the voids. How far into the void will a galaxy move in 14 billion years? Is it a reasonable hypothesis that the voids have existed for 14 billion years? Remember that the voids typically have a diameter of 150 million light years that 1 light-year = 9.46 x 1015 m that 1 hear = 3.15 x 107 seconds and speed = distance /time.

23: You can calculate the velocity, the distance, and thus the “look-back time” of the most distant galaxies.  The Doppler shift gives the velocity and that velocity with the Hubble-Lemaitre law gives us the distance away.  If you look back in the Sloan Digital Sky Survey image] you can see that the redshift “z” is given on the graph.  Confirm for yourself by looking at the diagram that the redshift for those most distant galaxies is 0.14.  That means that Δλ / λ = 0.14 or the redshift is 14%.  The Doppler formula for velocity v = c ( Δλ / λ ) so first calculate the recession speed of those distant galaxies.  Then use the  Hubble law where v = H × d, where d is the distance to a galaxy and H =  (22 km/s) / 1 million light years  to find the distance.  In other words d = v / H.  Take the v from the first part of this question and divide by H to get the distance.  For these low velocities, you can neglect relativistic effects.   The Sloan Digital Survey was shown in this earlier section and reproduced in thumbnail size below    The answer is given below.

25: The simulated box of galaxy filaments and superclusters shown in the previous section stretches across 1 billion light-years. If you were to make a scale model where that box covered the core of a university campus, say 1 km, then how big would the Milky Way Galaxy be? How far away would the Andromeda galaxy be in the scale model?  You can do this — it is a ratio problem.   If 1 km = 1 billion light years, then how big would the Milky Way Galaxy be?  Remember that the Milky Way galaxy is about 50,000 light years while the Andromeda Galaxy is about 2.5 million light years away.    The picture of the box is reproduced here in thumbnail size. 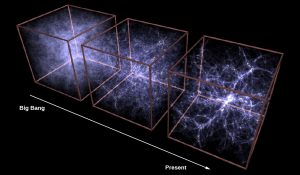 26: The first objects to collapse gravitationally after the Big Bang might have been globular cluster-size galaxy pieces, with masses around 106 solar masses. Suppose you merge two of those together, then merge two larger pieces together, and so on, Lego-style, until you reach a Milky Way mass, about 1012 solar masses. How many merger generations would that take, and how many original pieces? (Hint: Think in powers of 2.)

Douglas College Astronomy 1105 by Douglas College Department of Physics and Astronomy, Open Stax is licensed under a Creative Commons Attribution 4.0 International License, except where otherwise noted.