This term refers to how efficient a light source is at converting electrical energy into Luminous Flux. It is the ratio of how many lumens are created for a given watt of electrical power consumed.

At 100% efficiency 1 watt of electrical power would produce 683 lumens.

Some light sources are more efficient at creating illumination than others. The standard incandescent lamp has a very poor efficacy at around 20 lumens per watt, with most of the energy consumed wasted as heat.

Common fluorescent lamps have an increased efficacy ranging between 50 to 100 lumens per watt. All lamp efficiency ratings will vary by manufacturer. While fluorescent lamps are more efficient, they require additional equipment in the form of ballasts to operate, and the efficacy rating must include all losses due to heat in either the lamp, ballast or other associated control equipment.

Recent improvements in LED lighting technology are making many older lighting systems obsolete. LED’s are extremely efficient at producing illumination, with some LED’s approaching 150 lumens per watt. LED’s will also require auxiliary equipment in the form of a driver, which will also affect their efficiency ratings. Combined with long life, low electrical power consumption and good colour rendition, it’s easy to see why LED’s are often the first choice for new lighting installations.

As a general rule any time that energy is transformed in some fashion, there is a loss of energy wasted in the form of heat. 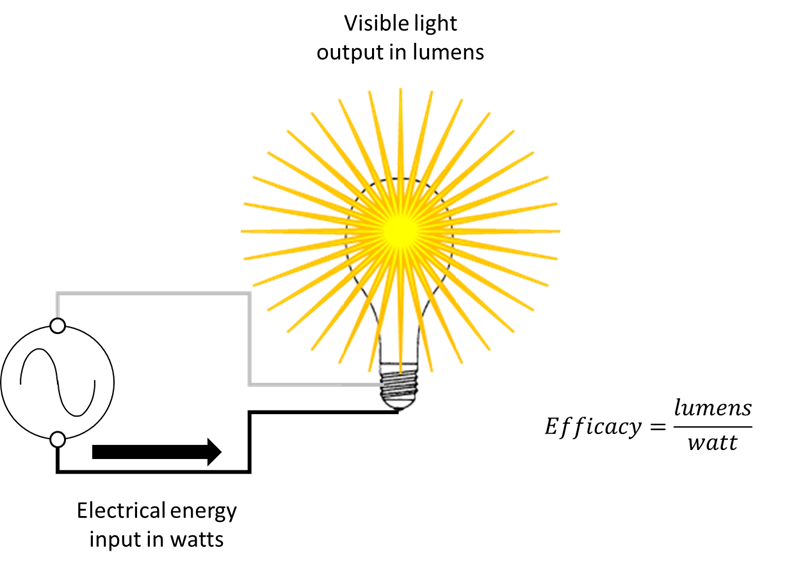