Diodes are made from semiconductor materials, such as silicon, which is considered neither a good conductor nor a good insulator.

To create a diode, we take silicon, which has four valence electrons, and through a process called doping, we add a small impurity to the silicon.

If the impurity is trivalent, meaning it has three electrons in its valence shell, it will create a P-type semiconductor, which has an excess of holes as positive charge carriers.

If the impurity is pentavalent, meaning it has five electrons in its valence shell, it will create an N-type semiconductor, which has an excess of electrons as negative charge carriers. 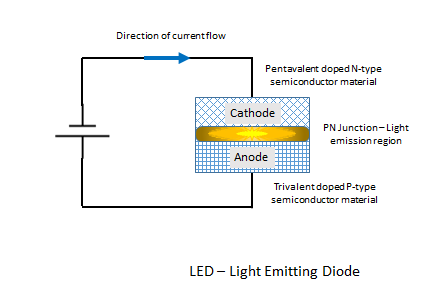 When conducting in forward bias a certain amount of energy will be released by all diodes. Regular diodes will emit a small amount of heat when they are conducting current. Heat is just light in the infrared portion of the electromagnetic spectrum, which has a longer wavelength than we can perceive. If the diode is specially constructed with materials such as gallium arsenide the energy released will be in the form of visible light.

Older white light LEDs were created by using a combination of red, green and blue LEDs and controlling the voltage and current through each of them. More recently, specially constructed diodes made with a blue indium gallium chip, combined with a phosphor coating, are able to create a suitable white light from a single diode. The phosphor coating, as with fluorescent lighting, creates the necessary wave shift to emit white light with an acceptable CRI of around 70.

Most common LEDs require a forward operating voltage of between approximately 1.2 to 3.6 volts with a forward current rating of about 10 to 50 mA.