At the end of this chapter you should be able to:

Beams are structural elements with various engineering applications like roofs, bridges, mechanical assemblies, etc.  In general, a beam is slender, straight, rigid, built from isotropic materials, and most important, subjected to loads perpendicular to their longitudinal axis.  If instead of perpendicular loads the same structural member would be subjected to longitudinal loads it would be called column or post.  If the same member would be subjected to a torque, it would be called and treated as a shaft.  Therefore, when identifying mechanical or structural components, consideration of the manner of loading is very important.

Note that when it comes to orientation, beams can be horizontal, vertical or any inclination in between (like submerged plates analyzed in fluid mechanics)… provided the loading is perpendicular to their major axis.

When solving for reactions, the following steps are recommended:

“Shearing forces are internal forces developed in the material of a beam to balance externally applied forces in order to secure equilibrium of all parts of the beam.

Bending moments are internal moments developed in the material of a beam to balance the tendency for external forces to cause rotation of any part of the beam.” [3]

The shear force at any section of a beam may be found by summing all the vertical forces to the left or to the right of the section under consideration.

Similarly, the bending moment at any section of a beam may be found by adding the moments from the left or from the right of the section considered. The moment’s pivot point is the location under consideration.

By convention, internal shearing forces acting downward are considered positive. They counteract upward external forces. Therefore, when representing the shear forces you can draw them in the direction of external forces. This is visually easier than following the sign convention. 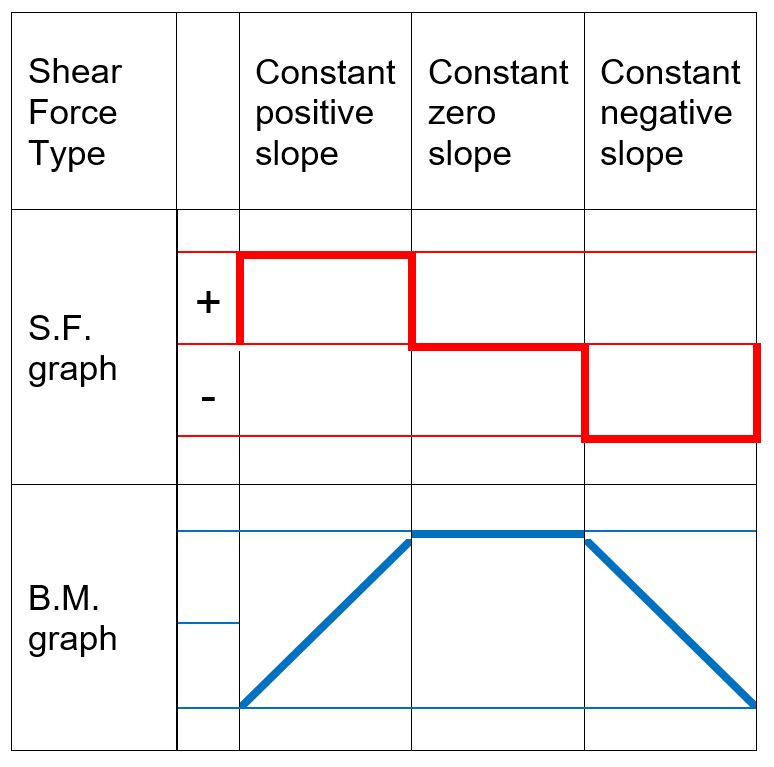 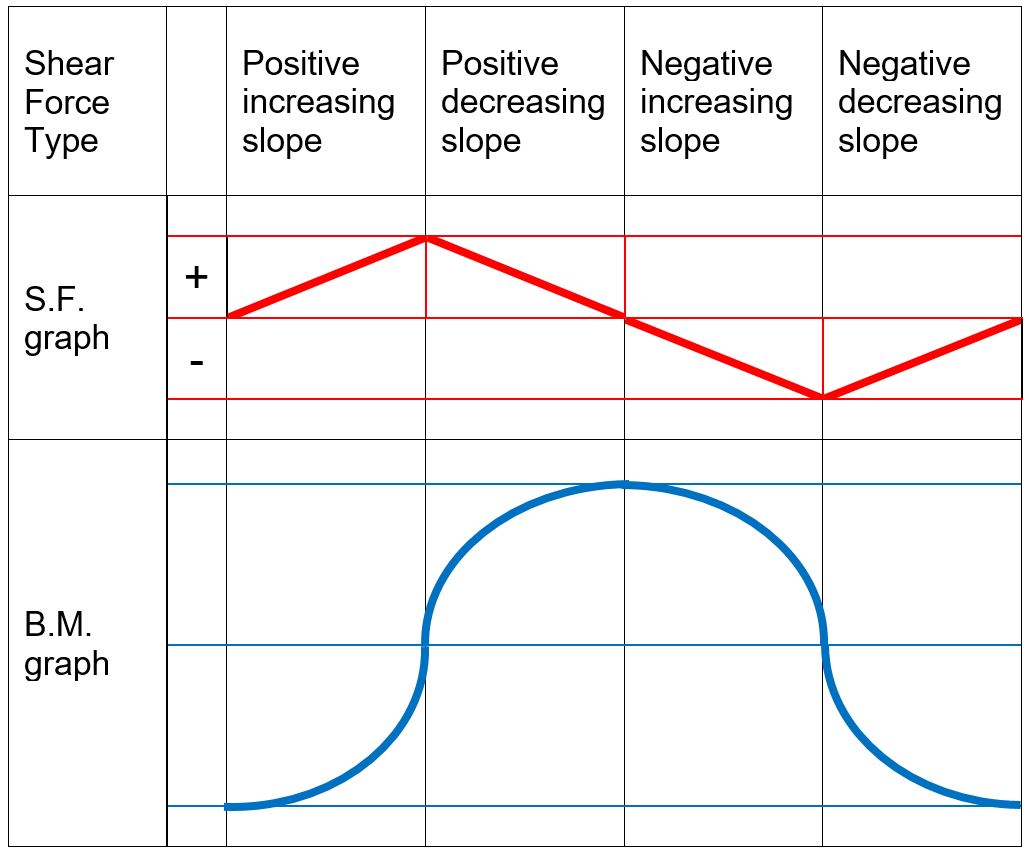 When drawing the shear force and bending moment diagrams, while the sign convention is important, consistency is crucial.  For instance, consider a simple beam loaded with a point load applied on a UD load. Starting the diagrams at support A, looking towards the page, will generate the following: 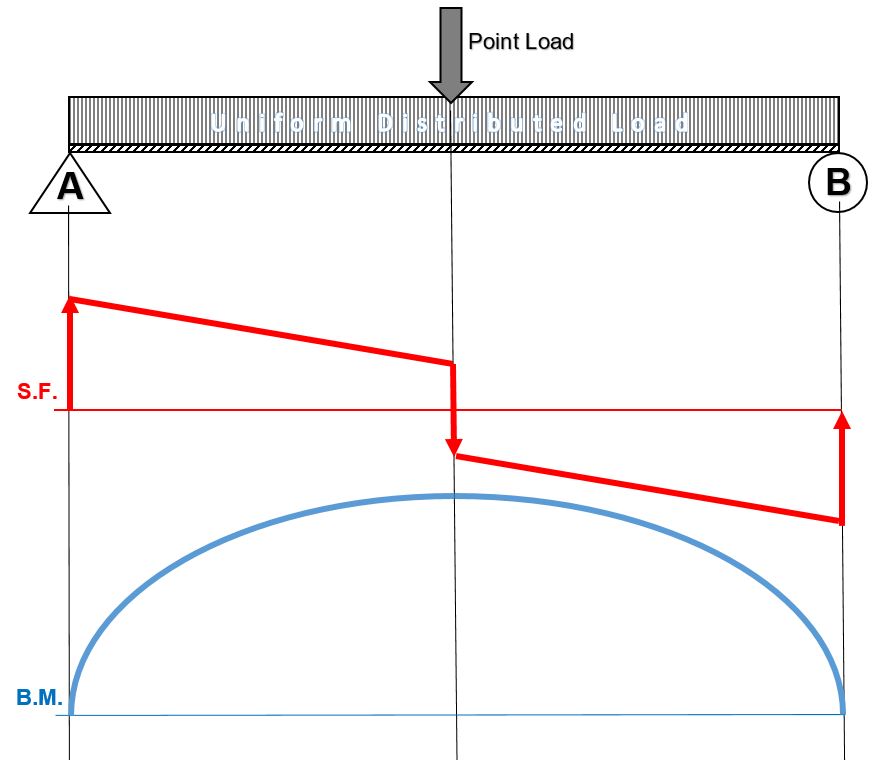 Now, flip the beam horizontally 180º (or change the observation point, looking at the beam from the opposite side) and draw the diagrams, starting from the same point A. The diagrams will appear as follows: 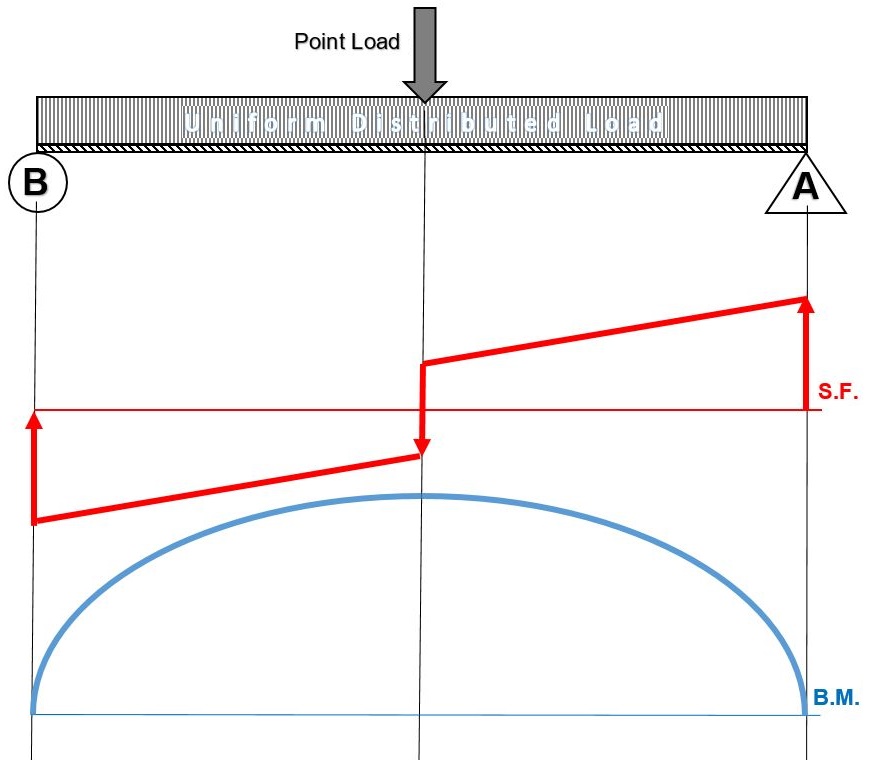 Note that, while the shear force diagrams appeared to be mirrored images (flipped horizontally), the bending moment diagram is not affected.  Additionally, the most important result of this analysis, illustrates that maximum shear force and bending moment magnitudes will always be the same.

When drawing the beam diagrams please observe the following:

The above guidelines will assist you in generating the beam diagrams;  they also serve as a check.

Calculate the beam reactions and draw the shear force and bending moment diagrams for the following beams.

When solving beam diagrams in class and at home you may check your answers by using this free online beam calculator:   SkyCiv Cloud Engineering Software

Problem 3: A 24 meters long beam is simply supported at 3 meters from each end.  The beam carries a point load of 18 kN at the left end and 22 kN at the right end of the beam.  The beam weighs 400 kg/m.  Sketch the beam diagrams and determine the location on the beam where the bending moment is zero.

Problem 4: A simple overhanging beam 112 ft long overhangs the left support by 14 ft.  The beam carries a concentrated load of 90 kips 12 ft from the right end and a uniform distributed load of 12 kips/ft over a 40 ft section from the left end.  Sketch the beam diagrams and determine the shear force and the bending moment at a section 50 ft from the left end.

Problem 5: Suggest an improvement to this chapter.

Strength of Materials Supplement for Power Engineering by Alex Podut is licensed under a Creative Commons Attribution 4.0 International License, except where otherwise noted.