At the end of this chapter you should be able to complete torsion calculations using:

Shafts are mechanical components, usually of circular cross-section, used to transmit power/torque through their rotational motion.  In operation they are subjected to:

This chapter will focus exclusively on evaluating shear stresses in a shaft.

All torsion problems that you are expected to answer can be solved using the following formula:

The nomenclature above follows the same convention as PanGlobal Power Engineering Training System.

Most common torsion problems will indicate the transmitted power (kW) at a certain rotational speed (rad/s or RPM).  The equivalent torque can be found with:

Called Modulus of Rigidity in PanGlobal and Reed’s, the shear modulus is defined (similarly as E) as ratio of shear stress to the shear strain.  It is expressed in GPa or psi and typical values are given in Textbook Appendix B.  Typical values are lower than Young’s Modulus E, for instance ASTM A36 steel has EA36 = 207 GPa and GA36 = 83 GPa.

The torque deformation of a shaft due is measured by the twist angle at the end of the shaft.  This angle of twist depends on the length of the shaft, as shown in the following figure: 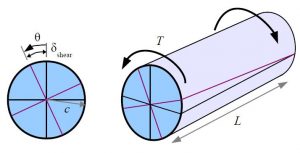 The angle of twist, [radians] is used in the general torsion equation and in estimating the shear strain, γ (gamma), non-dimensional.

Problem 1: To improve an engine transmission, a solid shaft will be replaced with a hollow shaft of better quality steel resulting in an increase in the allowable stress of 24%. In order to keep the existing bearings, the new shaft will have the same outside diameter as the existing, solid shaft. Determine:

(b) the weight savings in percentage, assuming that the steel densities of both shafts are identical

Problem 2: A turbine – generator transmission is rated for 3500 kW at 160 RPM. The shafts, 180 mm diameter and 2 m long, are connected through a flanged coupling with 6 coupling bolts of 40 mm diameter arranged on a pitch circle of 340 mm. If  the shaft shear modulus is 85 GPa determine:

(a) the maximum shear stress in the shaft

(b) the shear stress in the bolts

Problem 4: A brass liner, 24 mm thick, is shrunk over a solid shaft of 220 mm diameter.  Taking Gsteel = 85 GPa and Gbrass = 37 GPa, determine the maximum shear stress in the shaft and liner if the transmitted torque is 240 kN×m.  Also determine the angle of twist if the shaft length is 3.4 m.

Problem 5: Suggest one improvement to this chapter.

Strength of Materials Supplement for Power Engineering by Alex Podut is licensed under a Creative Commons Attribution 4.0 International License, except where otherwise noted.