Economics looks at how rational individuals make decisions. An important part of being a rational decision maker is considering opportunity costs. In our introductory section we identified the concept of scarcity. Normally we are quite good at considering scarcity when it comes to resources and money. What we are less good at considering is scarcity of time.

Consider the following image that shows the number of weeks an average human lives. Sometimes it kind of feels like our lives are made up of a countless number of weeks. But there they are—fully countable—staring you in the face. This isn’t meant to scare you, but rather to emphasize that a rational consumer doesn’t ignore time, but incorporates it into the analysis of any decision they make. 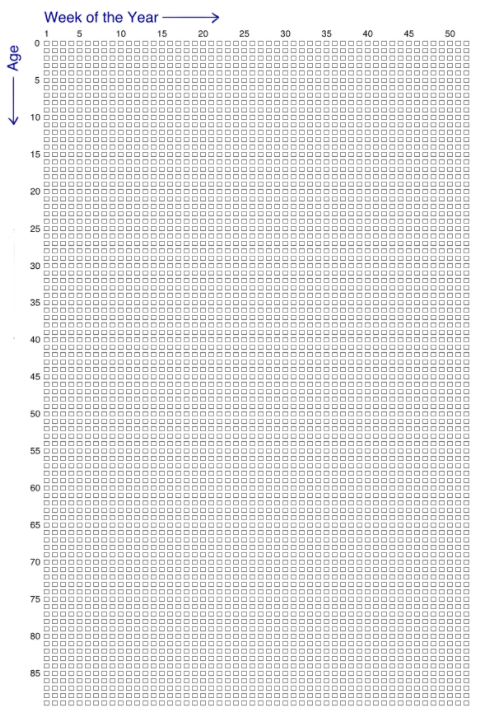 So how do you ‘spend’ your time? In economics, we want to place a value on each different opportunity we have so we can compare them.

What if your friends were to ask you if you want to go out to the club? How much do you value it? As economists, we want to measure the happiness you will get from this experience by finding your maximum willingness to pay. Let’s say that for a 5 hour night at the club, the MOST you are willing to pay is $100. Seem high? If you have gone clubbing, this is likely close to what you paid for it.

Suppose the costs of going clubbing are $50 ($15 cover, $20 for drinks and $15 for a ride home). With that analysis it seems like you should go, but so far we have only considered the explicit costs of the experience. An explicit cost represents a clear direct payment of cash (whether actual cash or from debit, credit, etc). But what about our time? We must consider time as another cost of the action.

How do we measure time? Simple – what else could we be doing with that time? Assume you also work as a server at the campus pub, where you get paid $15 an hour (including tips). This makes it easy to put a dollar amount on your time. For 5 hours of clubbing, you are forgoing the opportunity to earn $75 ($15 * 5). This is your implicit cost for clubbing, or the cost that has been incurred but does not result in a direct payment.

It is important to note that the implicit costs are the benefit of the next best option. There are an infinite number of things we could be doing with our time, from watching a movie to studying economics, but for implicit costs we only consider the next best. If we took them all into account our costs would be infinite.

Consider the two options side by side.

This shows us something interesting. Even though we are willing to pay $100 to go out clubbing, our ‘happiness’ from working is greater. A rational consumer would chose to work. The $75 we could be earning from working is equal to our implicit costs of going out since, rather than going clubbing, we could be making money for the 5 hours. To truly consider costs we must always consider our opportunity costs which include the implicit and explicit costs of an action.

In this example if you were to go clubbing opportunity costs are:

Should you go clubbing? You are only willing to pay $100, and your opportunity costs are $125 so no!

Does this mean you should never go out? Not at all. You just may be surprised that your willingness to pay may be well over $100.

How to measure ‘Happiness’

In our previous analysis we refer to the concept of “Total Happiness.” The problem is, happiness is not an easy value to measure. Daniel Bernoulli, an economist, first introduced the concept of utility as a means of measuring happiness. Classical economists will often assume that utilities can be measured as a hard number. In reality, it is must harder to measure the happiness a consumer  receives from a good. Often, we will use the measurement of how much a consumer is willing to pay, but even this information can be difficult to assess. For the remainder of Topic 1, we will refer to happiness as something that can be measured, recognizing that this is rarely as easy as it will appear here.

This leads us to a fairly simple conclusion. We should do something if the benefits outweigh the costs. The key insight is that the costs we are referring to are opportunity costs, which consider the next best alternative use of our resources.

We have now looked at how to analyze two options, but how do we make the decision? We can lay the process out in three steps:

If we want to change this into the process for a binary decision (yes or no):

It is important to note that not all decisions are binary.

Just as it is important to understand the costs that should be considered in decision making, it is important to understand what costs should not. Consider the two options you may have when you wake up – do you work out or sleep in? Have you ever convinced yourself to get out of bed by reminding yourself that you paid $60 for your monthly gym membership? Well, you fell victim to a common logical fallacy.

A sunk cost is a cost that no matter what is unrecoverable. As such it should have no impact on future decision making. This may sound strange, but consider the your two options using the analysis learned above for making decisions.

Following our steps we find the maximum willingness to pay for each option, subtract the explicit costs, and compare the happiness from each. It does not matter that we spend $60 on a gym membership because no matter what we do we can’t get that money back. With this willingness to pay reflected in the table, the better option is to Sleep-In, with an opportunity cost of $20.

Notice that the $60 is not included as an explicit costs because it is not an additional cost we have to incur as a result of working out. Since we have already paid the $60, it is no longer something we consider.

Why Buy a Gym Membership?

Why would one ever buy a gym membership? Well in this case, it might be a bad idea. The ‘willingness to pay’ represents how badly someone might want to go to the gym. If you knew that every morning you would wake up and value sleeping more than working out, then a gym pass might not be for you.

If that was the case you would need to find a way to increase your willingness to go to the gym, for example, if you committed to a work out plan with a friend, the social cost of sleeping in may be high, incentivizing you to get out of bed.

The important lesson here is to be mindful of your future motivation when you are incurring a sunk cost.

Sunk costs aren’t exclusive to gym memberships, in fact, the sunk cost fallacy is common in big business and government. Ever heard the expression “we’ve invested too much in this project to back out now?” Even if you have not, it sounds fairly logical – unfortunately it is not.

Consider a mining company that has invested $5 million in the infrastructure of a mine. After new information, they learn of another, richer mine site that they can mine for $4 million, with projected revenues of $8 million. The current mine site will cost $1 million to extract the remaining resources ($4 million projected revenue). What should the company do?

At shown the total profits from the new site are higher, so despite the fact they have invested $5 million in the old site, they should abandon it and mine the new. The conclusion:

Want to know how you can avoid the sunk cost fallacy in your decision making? Read more here.

Explicit Costs
the direct cost of an action, usually involves a cash transaction or a physical transfer of resources.

the indirect cost of an action, includes the cost of forgoing the next best option

all costs associated with an action, both explicit and implicit

Sunk Costs
costs that have been paid that cannot be recovered

Trade-Offs
a sacrifice of resources (time, money etc.) to achieve a certain benefit

1. Which of the following statements about opportunity cost is TRUE?

2. Which of the following statements about opportunity costs is TRUE?

4. Suppose that you are willing to pay $20 to see a movie on Saturday night. A ticket costs $10, and the next-best alternative use of your time would be to go to dinner with a friend. The cost of the dinner is $20 and you value the experience of having dinner with your friend at $60. The opportunity cost of seeing the movie is equal to:

5. Suppose that you are willing to pay $50 to see a movie on Saturday night. A ticket costs $15, and the next-best alternative use of your time would be to go to a concert which costs $80 and you value at $100. The opportunity cost of seeing the movie is equal to:

6. Suppose you play a round of golf costing $75. The golf takes four hours to play. If you were not playing golf you could be working and earning $40 per hour. The opportunity cost of your golf game is:

7. Suppose you have bought and paid for a ticket to see Lady Gaga in concert. You were willing to pay up to $200 for this ticket, but it only cost you $110. On the day of the concert, a friend offers you a free ticket to the opera instead. Assuming that it is impossible to resell the Lady Gaga ticket, what is the minimum value you would have to place on a night at the opera, in order for you to choose the opera over Lady Gaga?

8. Suppose that you are willing to pay $350 to see Leonard Cohen play at the Save-On-Foods Arena. Tickets cost $100, and the next-best alternative use of your time would be to work in paid employment earning $50 over the evening. The opportunity cost of seeing Leonard Cohen is equal to:

9. I am considering loaning my brother $10,000 for one year. He has agreed to pay 10% interest on the loan. If I don’t loan my brother the $10,000, it will stay in my bank account for the year, where it will earn 2% interest. What is the opportunity cost to me of the loan to my brother?

10. In January, in an attempt to commit to getting fit, I signed a year-long, binding contract at a local gym, agreeing to pay $40 per month in membership fees. I also spent $300 on extremely stylish gym clothes. This morning, I was trying to decide whether or not to actually go to the gym. Which of the following was relevant to this decision?

11. Suppose you have bought and paid for a ticket to see Kanye in concert. You were willing to pay up to $350 for this ticket, but it only cost you $100. On the day of the concert, a friend offers you a free ticket to Lady Gaga instead. You can resell your Kanye ticket for $80. What do your sunk costs equal?

12. Which of the following statements about sunk costs is FALSE?

13. As a member of UVic’s University Club, I pay $30 per month in membership fees. In a typical month I spend about $50 on beer at the Club. Every month I also have the option of attending a meeting of the whiskey club (open only to Club members), at a cost per meeting of $15, payable at the beginning of each meeting. Given this, what do my monthly SUNK COSTS equal?