The world’s first large scale application of cap and trade to control pollution was approved by the Bush administration in November 1990. Since then, it has been hailed by many as a landmark event in environmental regulation. Introduced under the Clean Air Act Amendments of 1990, the policy was launched to combat the growing threat of acid rain. It has been estimated that using this policy rather than command and control regulations saved the economy $1 billion a year. A new report from Harvard Environmental Economics Program concludes that the program was a great success by almost all measures.  The legislation  capped emissions at 8.95 million tons annually, allowing power plants to slash SO2 in the most efficient way.

At the beginning of the program, the government allocated allowances, denominated in tons of SO2 emissions, to power plants covered by the law, according to formulas contained in the legislation. If annual emissions at a regulated facility exceeded the allowances allocated to that facility, the facility owner could either buy allowances or reduce emissions, whether by installing pollution controls, changing the mix of fuels used to operate the facility, or by scaling back operations. If emissions at a regulated facility were reduced below its allowance allocation, the facility owner could sell the extra allowances or bank them for future use. These opportunities created incentives to find ways to reduce emissions at the lowest cost.

Read a full report about the full effects of this cap and trade program.

Let’s examine this program, and compare it to a program in the EU that was less successful. Assume there are only two firms in the market and  Firm 1 and Firm 2 face abatement curves as shown below: 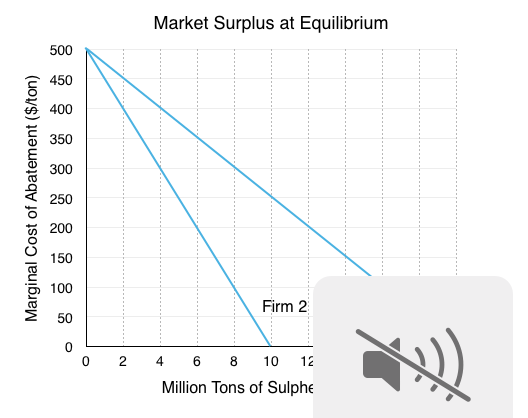 1. How much will the firms pollute before policy intervention?

2. If the government implemented a cap and trade system, distributing a total of 12 million permits, with 6 million to each firm, who would sell and who would buy permits?

5. What are the total benefits and total costs to each firm from trading permits? Show that the trade was a Pareto Improvement.

Instead of cap and trade, a common policy is for the government to set a carbon tax. As a reminder, a carbon tax imposes a tax on each unit of emissions and gives firms an incentive to reduce pollution whenever doing so would cost less than paying the tax. As such, the quantity of pollution reduced depends on the chosen level of the tax.

6. What is the correct tax level to receive the same result as in question 2?

7. How much revenue will the government raise from the tax?

8. What assumptions does the government have to make under cap and trade? What about under the carbon tax?

The SO2 allowance-trading program was highly effective. SO2 emissions from electric power plants decreased 36 percent (from 15.9 million to 10.2 million tons) between 1990 and 2004. The program’s long-term goal of reducing annual nationwide emissions to 8.95 million tons was achieved in 2007.

Not all cap and trade programs have been effective. The EU Emissions Trading System for example has been largely unsuccessful. The cap was set at 16 billion tonnes, or roughly half the European Union’s total carbon emissions. Unfortunately the government overestimated the demand for carbon, and to make things worse a recession reduced industrial demand. 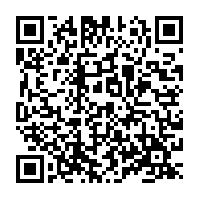 Read more about the failure of the EU Emissions Trading Scheme.

Assume Firm 1 and Firm 2 face abatement curves as shown below: 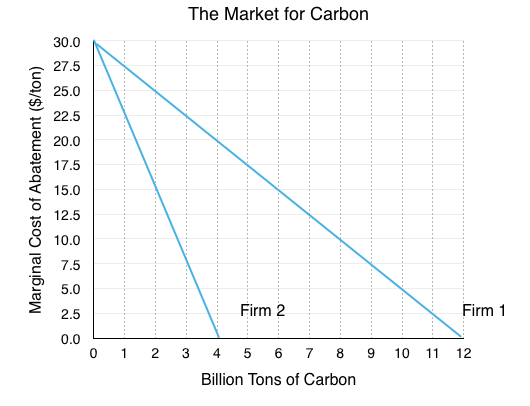 9. If the government implemented a cap and trade system, distributing a total of 16 million permits, how much will emissions be reduced by as a result of this policy?

Once the cap and trade program was implemented, it was hard to adjust it. The EU later attempted to take 900m tonnes of carbon allowances off the market and reintroduce them when it was hoped demand would be stronger, but the attempt failed to pass through European parliament.

Another way to correct the program would be for the government to buy the permits off the firms themselves.

10. If the government wanted to reduce emissions by 50% by purchasing permits, what is the minimum amount they would have to pay?

As you can see, while it may seen a cap and trade program would be easy to readjust if quantity assumptions are wrong, in reality implementing a policy and communicating it to the firms can be quite difficult.

In this case study we have shown how microeconomic concepts of abatement and carbon-tax can be used to understand past policy strategies. Do you have a example you think would make a good case study? Contact economics103@uvic.ca to propose your story.