We have now explored the two sides of the spectrum. In perfect competition, we assume identical products, and in a monopoly, we assume only one product is available.

Monopolistic competition lies in-between. It involves many firms competing against each other, but selling products that are distinctive in some way. Examples include stores that sell different styles of clothing, restaurants or grocery stores that sell different kinds of food and even products like golf balls or beer that may be at least somewhat similar but differ in public perception because of advertising and brand names. Firms producing such products must also compete with other styles, flavours and brand names. The term “monopolistic competition” captures this mixture of mini-monopoly and tough competition.

Who invented the theory of imperfect competition?

The theory of imperfect competition was developed by two economists independently but simultaneously in 1933. The first was Edward Chamberlin of Harvard University who published The Economics of Monopolistic Competition. The second was Joan Robinson of Cambridge University who published The Economics of Imperfect Competition. Robinson subsequently became interested in macroeconomics where she became a prominent Keynesian, and later a post-Keynesian economist.

Physical aspects of a product include all the phrases you hear in advertisements: such as an unbreakable bottle, nonstick surface, freezer-to-microwave, non-shrink, extra spicy, newly redesigned for your comfort. The location of a firm can also create a difference between producers. For example, a gas station located at a busy intersection can probably sell more gas than one located on a small side-road. A supplier to an automobile manufacturer may find that it is advantageous to locate near the car factory.

Intangible aspects can differentiate a product, too. Some intangible aspects may be promises like a guarantee of satisfaction or money back, a reputation for high-quality services like free delivery, or a loan to purchase the product. Finally, product perception may occur in the minds of the buyers. For example, many people could not tell the difference in taste between common varieties of beer or cigarettes if they were blindfolded, but because of past habits and advertising, they have strong preferences for certain brands. Advertising can play a role in shaping these intangible preferences.

The concept of differentiated products is closely related to the degree of variety that is available. If everyone in the economy wore only blue jeans, ate only white bread, and drank only tap water, then the markets for clothing, food, and drink would be much closer to perfectly competitive. The variety of styles, flavors, locations, and characteristics creates product differentiation and monopolistic competition.

Perceived Demand for a Monopolistic Competitor

Recall that monopolistic competition refers to an industry that has more than a few firms that each offer a distinguished product. The Canadian cellular industry is one such market. With a history dating back as far as Alexander Graham Bell’s invention of the telephone in 1876, the Canadian cellular industry now has a number of large firms including Rogers, Telus, and Bell. What about Fido, Koodo, and Virgin Mobile? They are owned by Rogers, Telus, and Bell, respectively. While this market has some similarities to an Oligopoly (which we will not explore in this course), it is often classified as a monopolistic competition.

Consider what you would do if your monthly cell phone bill increased by $2. Would you switch to another company? Likely not. This means that the cellular market is certainly not perfectly competitive as cell phone companies have some ability to change prices. Therefore, the demand faced by each of the cellular companies will be more elastic than market demand, but not perfectly elastic. Let’s explore how these monopolistic competitive firms set prices.

How a Monopolistic Competitor Chooses Price and Quantity

To explore monopolistic competition, let’s consider Rogers, one of the Cellular companies in the market. Rogers faces a downward sloping demand curve and has ATC and MC curves similar to the ones we have seen before.

The monopolistically competitive firm decides on its profit-maximizing quantity and price similar to the way that a monopolist does. Since they face a downward sloping demand curve, the same considerations about how elasticity affects revenue are relevant, and the firm will maximize profits where MR = MC when P > MR.

Step 1. Rogers determines its profit-maximizing level of output. This will occur where MR = MC. Two situations are possible:

In this example, MR and MC intersect when Rogers has 3.6 million subscribers.

Step 2. Rogers decides what price to charge. When the firm has determined its profit-maximizing quantity of output, it will behave like a monopoly and charge the maximum it can at the quantity. On the graph, this process can be shown as a vertical line reaching up through the profit-maximizing quantity until it hits the firm’s perceived demand curve. For Rogers, this occurs at a price of $70/month.

Consider the profits of Rogers at equilibrium quantity of 3.6 million subscribers:

At a price of $70/month, ATC is only $60 and Rogers’ profit is $36 million. ($10 profit/subscriber) Notice that this market creates a deadweight loss equal to the red area since the equilibrium quantity is less than what would occur in competitive equilibrium (5 million subscriptions).

Remember that in monopolistic competition, there are few barriers to entry. Since Rogers is earning positive economic profits, other firms will be tempted to enter the market.

When will this shifting stop? When profits are 0. As long as P > ATC firms will continue to enter the market, and demand will continue to shift inward. As shown in Figure 8.4d, this occurs when P = ATC and MR = MC. This specific point happens when Demand is tangent to ATC, because only when this is true can P = ATC, given that ATC is downward sloping (recall that the MC curve passes through ATC at the minimum point of ATC, and note that the minimum point of ATC is at a quantity higher than that produced by the monopolistically competitive firm).

What about the social surplus? Although profits are now 0, a deadweight loss persists. This is because, unlike perfect competition, P > MR, which also means that P > MC. Since consumers’ willingness to pay is greater that the marginal cost of the firm, market failure continues. Remember that a key reason for this is the firms’ inability to charge more that one price. Notice also that ATC is not at a minimum. This is the price the market pays for variety since the aggregate market does not ensure the most efficient production when there is slight differentiation in products.

The Benefits of Variety and Product Differentiation

Even though monopolistic competition does not provide efficiency, it does have benefits of its own. Product differentiation is based on variety and innovation. Many people would prefer to live in an economy with many kinds of clothes, foods, and car styles; not in a world of perfect competition where everyone will always wear blue jeans and white shirts, eat only spaghetti with plain red sauce, and drive an identical model of car. Many people would prefer to live in an economy where firms are struggling to figure out ways of attracting customers by methods like friendlier service, free delivery, guarantees of quality, variations on existing products, and a better shopping experience.

Economists have struggled, with only partial success, to address the question of whether a market-oriented economy produces the optimal amount of variety. Critics of market-oriented economies argue that society does not really need dozens of different athletic shoes or breakfast cereals or automobiles. They argue that much of the cost of creating such a high degree of product differentiation, and then of advertising and marketing this differentiation, is socially wasteful—that is, most people would be just as happy with a smaller range of differentiated products produced and sold at a lower price. Defenders of a market-oriented economy respond that if people do not want to buy differentiated products or highly advertised brand names, no one is forcing them to do so. Moreover, they argue that consumers benefit substantially when firms seek short-term profits by providing differentiated products. This controversy may never be fully resolved, in part because deciding on the optimal amount of variety is very difficult, and in part because the two sides often place different values on what variety means for consumers.

How does advertising impact monopolistic competition?

The Canadian economy spent about $12.22 billion on advertising in 2016, according to statista.com.

However, economists and business owners have also long suspected that much of the advertising may only offset other advertising. Economist A. C. Pigou wrote the following back in 1920 in his book, The Economics of Welfare:

Monopolistically competitive industries do offer benefits to consumers in the form of greater variety and incentives for improved products and services. There is some controversy over whether a market-oriented economy generates too much variety.

The following table summarizes the three types of market structure we have examined. The fourth, oligopoly, is not in the scope of this course.

The following TWO questions refer to the diagram below, which illustrates the demand, marginal revenue, and relevant cost curves for a monopolistically competitive firm. 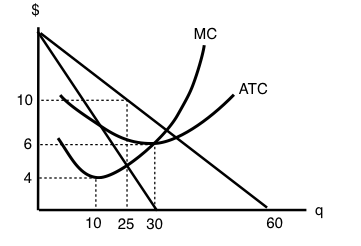 1. How many units of output should this firm produce, in order to maximize profits?

2. In the long run, what price will this firm charge for its output?

The following TWO questions refer to the diagram below. 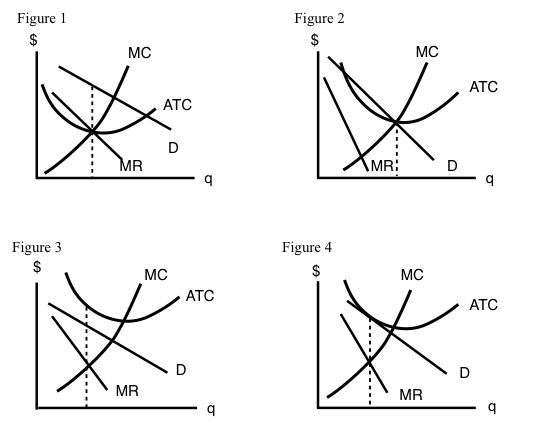 3. Which of the four diagrams illustrates a long run equilibrium for a monopolistically competitive firm?

4. Which of the four diagrams illustrates a monopolistically competitive firm able to make positive economic profits in the short run?

6. Which of the following statements about the comparison between perfect competition and monopolistic competition is TRUE?