Putting it All Together: Maslow’s Hierarchy of Human Needs

Classic economic theory, based as it is on an inadequate theory of human motivation, could be revolutionized by accepting the reality of higher human needs, including the impulse to self actualization and the love for the highest values.

As presented in chapter 1, Abraham Maslow, a humanistic psychologist, proposed a (1943) often portrayed as a pyramid (see Figure 4.7). Maslow’s pyramid integrates primary (biological) and secondary (psychological) needs into one overarching schema portraying the human condition. Basic physiological needs form the base of the pyramid, followed by safety and security, sense of belonging (i.e., love and interpersonal relationships), self-esteem (i.e. feeling of accomplishment), and self-actualization (fulfilling one’s personal goals and potential) at the pyramid’s peak. 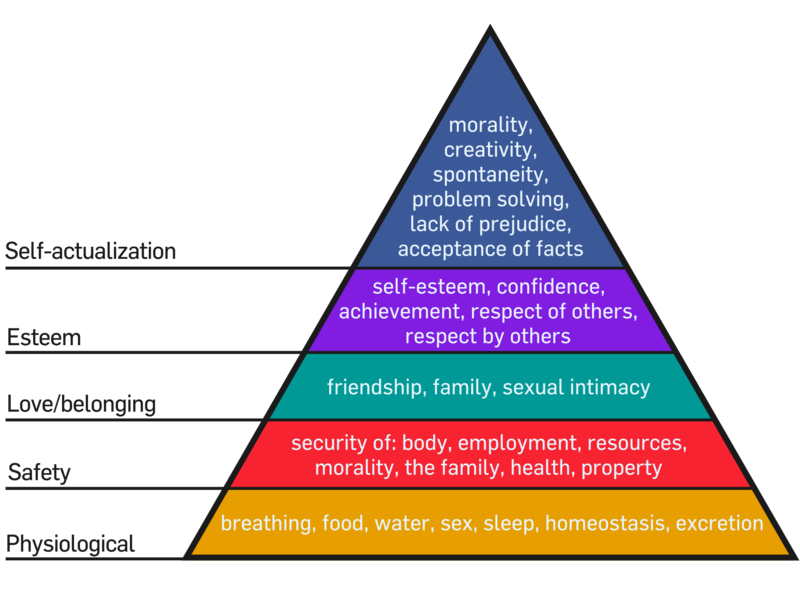 Maslow’s hierarchy is a perceptive and constructive schema for organizing and prioritizing aspects of the human condition. It provides a meaningful lens through which to view the differences between the adaptive needs of different cultures. According to Maslow, the objective of human adaptation is to rise through the pyramid ultimately achieving self-actualization.

Describe each of the levels in Maslow’s pyramid of human needs.

In order to demonstrate the extreme variability in human conditions, Maslow’s schema can serve as a basis for examining the differences between Stone-Age and technologically-advanced cultures. Obviously, far more time and effort must be dedicated by the Nukak than by us to satisfy the basic survival needs at the base of Maslow’s pyramid.

Self-actualization refers to the attainment of one’s personal goals and fulfillment of one’s potential. It is often assumed that self-actualization is achieved through creative and artistic endeavors. For the most part, the Nukak’s personal goals are addressed under survival and family needs. Fulfilling one’s potential requires time and opportunity, neither of which is in large supply for the Nukak. As we have seen, almost all of their days are taken up with activities related to survival. These include foraging, food preparation, tool making, moving, and building new shelters. Still, the Nukak manage to demonstrate such distinctly human acts of creativity as face and body painting and wearing jewelry. They fashion flutes on the flat side of long jaguar or deer bones with mouthpieces made of beeswax. Such flutes have important symbolic and ritual value among many tribes in the Amazon (Politis, 2007, 219). Body painting using plant dyes serves as a means of indicating one’s gender and band identity. Body painting is more extensive and elaborate in preparation for meetings and ceremonies (Politis, 2007, 83). It is thought that the paint may act as an insect repellent. Many of the Nukak adults and children of both genders wear necklaces fashioned of monkey-teeth.

Watch the following video for a demonstration of artistic and musical activities by the Nukak:

Unlike the Nukak, we do not have to dedicate the majority of our time and effort to simply surviving until the next day. There is an ever-increasing variety of educational, career, and leisure-time possibilities. Still, many face obstacles in attaining their goals or realizing their potential. What are the prospects for self-actualization in the technologically enhanced world?

First, the importance of the “self” in “self-actualization” must be recognized. That is, “goals” and “one’s potential” are subjective and must be defined by each individual for her/himself. This thought is recognized in the most famous quote from The Declaration of Independence: “We hold these truths to be self-evident, that all men are created equal, that they are endowed by theircreator with certain unalienable rights, that among these are life, liberty and the pursuit of happiness.” Self-actualization and happiness are elusive concepts. Jonathan Haidt opens his book, The Happiness Hypothesis (2006), with the questions: “What should I do, how should I live, and whom should I become?” Despite all our technology, there are limitations to what we can do, how we can live, and who we can become. Unless an identical twin, each of us has our own genetic endowment resulting in differences in the ease of learning different behaviors. Try as we might, none of us is able to fly like Superman. Some of us find learning mathematics easier than learning to speak a foreign language whereas the reverse is true for others. Some of us live in environments that are supportive of our behaviors whereas others are discouraged or find it dangerous to behave in the same way. Some of us grow up in privilege and others face significant economic obstacles and barriers. Some of us have a smooth and direct educational and career path. Others of us follow a “long and winding road” in life.

Describe differences in how Stone-Age and technologically-enhanced cultures meet their self-actualization needs.

No matter what our life circumstances or where we live on earth, a day lasts 24 hours. Our unique human conditions may be represented as pie charts in which the slices represent how we spend our time each day. Due to the conditions under which they live, more than half of a Nukak’s waking life is dedicated to survival needs. Relatively little time is left for addressing interpersonal and esteem-needs, let alone self-actualization. In comparison, college students in our technology-enhanced environments can dedicate much more of their waking time to these “higher” levels of Maslow’s pyramid of human needs.

Maslow’s hierarchy of human needs was used as an organizational schema to compare and contrast the human conditions of nomadic Stone-Age and technologically enhanced cultures. In the absence of food surpluses, life is a daily struggle to survive. Population densities and social networks are minimal. Advanced learning is unnecessary and there are few examples of artistic creativity.

Technology can free the human being from the struggle to meet basic physical needs. Much of childhood and adolescence can be dedicated to schooling. As an increasing percentage of the population acquires reading, writing, and quantitative skills, more individuals can contribute to a culture’s knowledge, technology, and creative arts. The social, vocational, and creative opportunities available to an individual are all influenced by the existing technologies. Life becomes adaptation to a human constructed world.

Self Actualization: The ultimate do-it-yourself project

Creation of a detailed personal pie chart involving recording and graphically portraying how you spend your time is a way to objectively describe who you are and who you want to become. This process can be diagnostic and prescriptive with respect to your achieving your self-actualization objectives. That is, realizing your potential can be considered an exercise in time management.

Whenever you undergo a transition in life, there is a change in how you must spend your time. This applies to when you start attending school, get a job, commit yourself to a significant other, have a child, advance in your career, and retire. Whew, that was fast! Let’s slow things down by concentrating on this particular and special time in your life. As a college student, you have committed yourself to a pie requiring specific slices. In addition to facing safety and survival needs, you must attend classes and prepare for exams. Otherwise you will be forced to “bake” a different pie!

The first step in creating your personal pie chart is to keep a diary of how you spend your time every day. Allowing for the fact that your schedule might not be representative at the beginning of the semester, you will probably need at least two weeks of data. It is probably possible to anticipate some of the pie “slices” (i.e., meaningful time blocks). For example, sleep will most likely constitute approximately one-third of your pie (i.e., 8 hours per day). Another slice could be allotted for “start-up” and “wind-down” (e.g., washing, brushing your teeth, etc.) each day, and another slice for meals. Time will be spent in class some days (another slice), and studying and working on assignments (another slice). Time will be spent socializing with friends and family. Many of my students use apps such as Screentime and Moment to monitor and limit time spent streaming, listening to music, social networking and playing video games. If you are employed, hours spent on the job and commuting (which can also apply to non-residential students) should be included.

If you are keeping a diary, add up the number of hours spent in different categories (slices) at the end of a representative week. The size of each slice (i.e., percentage of the pie) will be the total number of hours in a category divided by 168 (24 hours x 7 days). If you have trouble assigning some activities, it is fine to create a “miscellaneous” slice. In subsequent chapters, we will refer to the data you collect as you consider what constitutes self-actualization at this stage of your life (i.e., your “ideal” pie chart). This could require creating a different slice or even a separate pie (e.g., digital world or screen time).

The cell phone is becoming a very helpful self-actualization tool. If you own one, rather than keeping a diary, you could use one of the many convenient time-management apps for collecting and compiling the data for your pie chart. Some apps even create the pie chart for you. Other useful apps enable one to accurately determine sleep, nutritional, and exercise patterns. As we progress in the book, you will see how the science of psychology can provide scientifically-based strategies for modifying the slices of your pie in order to achieve your goals and dreams.

Maslow's integration of biological and psychological needs into one overarching schema portrayed as a pyramid; physiological needs form the base of the pyramid, followed by safety and security, love and interpersonal relationships, self-esteem, and self-actualization at the pyramid’s peak