Whether adapting to the rainforest or a modern city, we rely heavily on vision to survive and enjoy our surroundings. From the time we wake up in the morning to the time we go to bed at night, we almost constantly process and respond to visual information. We move about our surroundings, locating needed substances and objects, constantly assessing achievement of our goals. We fashion and use tools tailored to the demands of our unique environmental niches. Examples include blowpipes in the rain forest and laptops in our schools. No matter where they reside, humans engage in creative arts. Examples include playing flutes and fashioning necklaces in the rainforest; and playing flutes and fashioning necklaces in cities. The more some things change, the more they stay the same! We gaze upon and pay close attention to the appearance of others as we interpret facial expressions and body language in our interpersonal interactions. As expressed by Schopenhauer, our interpretation of our world and life is based upon what we see.

For most of our history on earth, humans experienced daily changes in the amount of light based upon the position of the sun. Only in the light do we experience the beauty of color. Seeing in the dark is a very different and more challenging experience. We will review how our eyes detect and process reflected light to enable color perception, and adapt to different levels of illumination. Transduction refers to the process through which physical stimulation is converted into neurological action potential and transmitted from receptors to higher brain regions for further processing. Figure 3.3 shows the major parts of the eye involved in the process converting light into electronic signals transmitted to the brain. Light reflected from objects enters and undergoes initial focusing as it passes through the transparent cornea. Depending upon darkness or brightness, the iris dilates or closes, controlling the amount of light reaching the lens. The lens changes shape depending upon distance of the object, completing focusing. The remaining focused beam of light reaches photoreceptors lining the surface of the retina. Most of the light reaches the center of the retina, with the fovea being the small focal point with the greatest concentration of photoreceptors. Signals from the photoreceptors travel along nerve fibers to the optic nerve at the back of the eye. From there the signals are transmitted to the occipital lobe of the cerebral cortex. 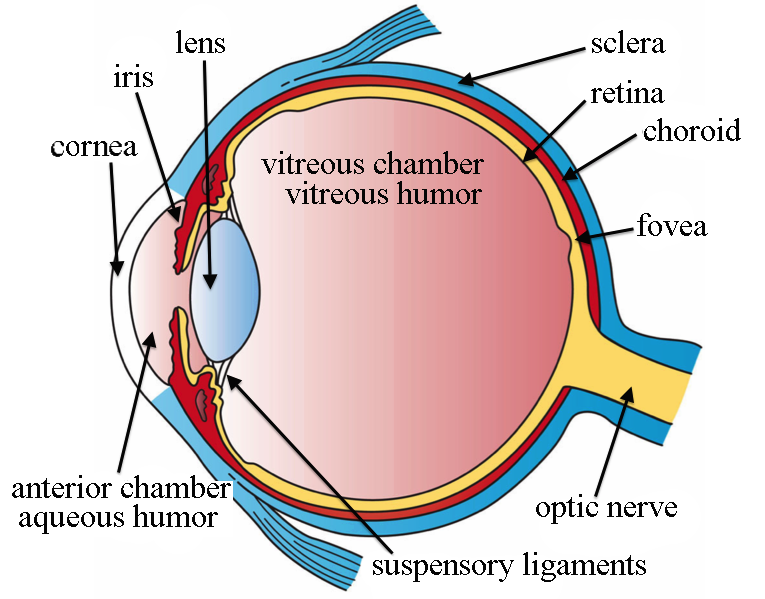 Can you imagine the world without color? Figures 3.4and 3.5 demonstrate not only the beauty which would be missing, but also the amount of potentially adaptive information. It is far easier to identify similarities and differences or look for a particular feature with the added dimension of color. This is even true for the birds and the bees, both of which possess excellent color vision. Clearly this ability is valuable from an adaptive evolutionary perspective. 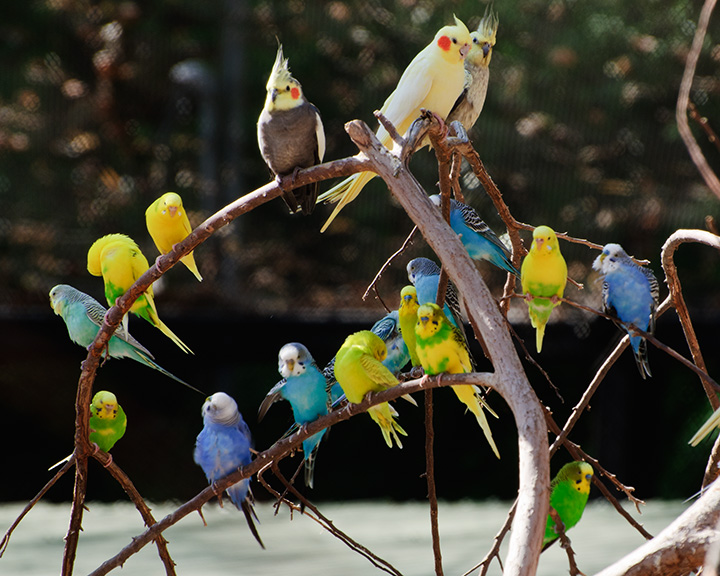 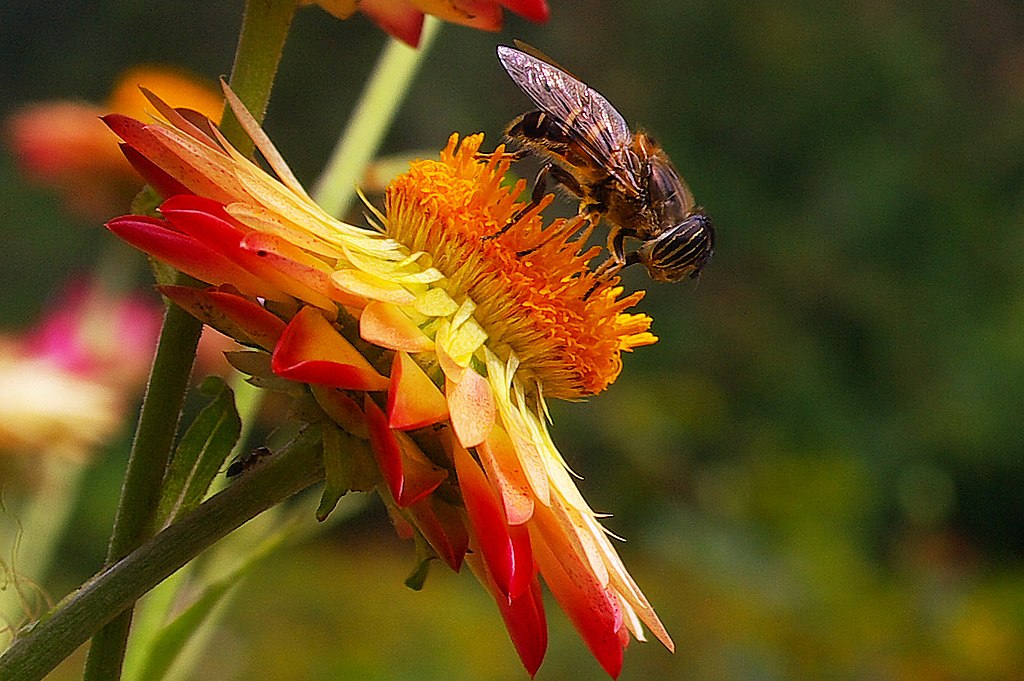 The psychophysics of color perception is non-intuitive. Subjectively, color differences seem qualitative rather than quantitative. That is, blue, green, and red are perceived as different in kind rather than different in magnitude on a dimension. You may be familiar with the acronym Roy G Biv. It stands for red, orange, yellow, green, blue, indigo, and violet. This is the reverse order of these colors on the dimension which extends from infinitesimally small gamma rays (measured in fractions of nanometers, billionths of a meter) to TV and radio waves which can extend for thousands of meters (see Figure 3.6).

The retina contains photoreceptors sensitive to a very narrow range of wavelengths, approximately 400 nm (violet) to 700 nm (red). The retinal surface includes two types of photoreceptors called and based on their shape. Rods are very sensitive to light and serve as the basis for vision in the dark, however visual acuity is poor in comparison to during daylight. Since rods are monochromatic (i.e., respond to only one color) and the information cannot be combined with information from cone receptors, very limited color perception is possible in the dark. There are three types of cones activated during daylight, each enabling perception of color on limited sections of the visible part of the electromagnetic spectrum: those responding to short (bluish), medium (greenish), and long (reddish) wavelengths (see Figure 3.7). 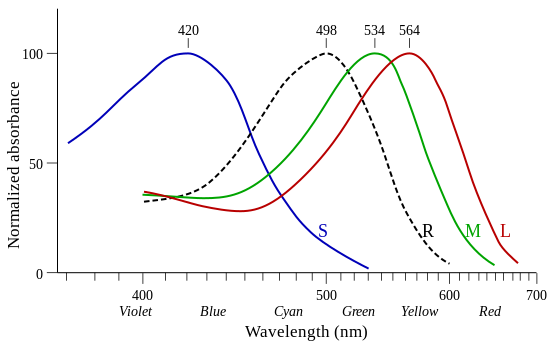 The , first advanced by Young (1802) and elaborated upon by Helmholtz (1850), proposes that all the colors humans perceive result from combinations of the outputs of photoreceptors for three primary colors (see Ypu Tube video). It was not until a century later that existence of the three types of cone cells was confirmed (Svaetichin, 1956), providing support for trichromatic theory.

Hering (1892) challenged trichromatic theory based on the observation that it does not seem possible to combine certain colors. There is no problem imagining reddish-orange, yellowish-green, or greenish-blue, but one cannot imagine reddish-green or bluish-yellow. For this reason, Hering proposed the . The theory proposes that there is an achromatic (i.e., without color) brightness system and a color system based upon the combined results of red-green and blue-yellow opponent channels. Stimulation of one of the colors of an opponent pair is presumed to inhibit perception of the other. This is how the theory explains the inability to combine red and green or blue and yellow. Another phenomenon that can be explained by opponent-process theory but not the trichromatic theory is the negative afterimage (see Figure 3.8). Stare at the word “afterimage” in the center of the rectangle below for 30 seconds. If you then shift your gaze to a white surface you will see the letters and background comprised of the compliments of the original colors. This is what would be expected if the initially activated component of a red-green or blue-cell system became fatigued. The result would be an illusion consisting of the complementary color.

We now know that whereas the trichromatic theory of color vision is correct at the level of the cones, the opponent-process theory is true at later stages of processing in bipolar cells on the way to the optic nerve (see Figure 3.8).

Watch the following video for a description of the trichromatic and opponent process theories of color vision:

Adapting to the Dark

Figure 3.9 shows the change in threshold intensity (i.e., the amount of light needed) to see in the dark over time for rods and cones. The cones are much more sensitive to light during the first five minutes but do not increase in sensitivity beyond ten minutes. Dark adaptation continues to improve with the trajectory for the rods leveling off after another ten minutes. This produces the scallop in the figure labeled the rod-cone break. 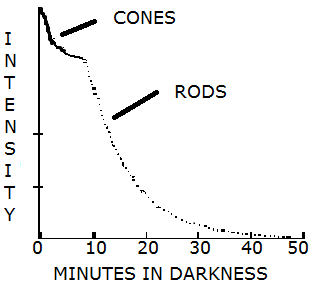 Figure 3.3 “Human Eye” by Holly Fischer is licensed under CC BY 3.0

Figure 3.5 “Bee and colorful flower” by Thangaraj Kumaravel is licensed under CC BY 2.0

Figure 3.8 “Negative afterimage” by Freakmighty is in the Public Domain, CC0

Figure 3.9 “Opponent process theory” by Fatbag is in the Public Domain, CC0

Figure 3.10 “Dark adaptation” by Dgtdsgn is licensed under CC BY-SA 3.0

nerve cells sensitive to light that serve as the basis for vision in the dark; rods are monochromatic (i.e., respond to only one color)

nerve cells that require more light than rods, but are sensitive to color

proposes that all the colors humans perceive result from combinations of the outputs of photoreceptors for three primary colors (red, green, and blue)

proposes that there is an achromatic (i.e., without color) brightness system and a color system based upon the combined results of red-green and blue-yellow opponent channels; stimulation of one of the colors of an opponent pair is presumed to inhibit perception of the other