In order to appreciate the differences between the lives of hunter-gatherer humans such as the Nukak, and technologically enhanced humans, it is necessary to consider the role and extent of social learning (i.e., involving others of the same species). Social learning can consist of simply observing how others behave under specific circumstances, or symbolic communication through the use of language. Usually, Introduction to Psychology textbooks cover observational learning in the same chapter as classical and instrumental conditioning, with language appearing in a different chapter. I prefer to combine these topics, using the previously mentioned distinction between direct and indirect learning.

In classical and instrumental conditioning, an individual interacts directly with environmental events. Pavlov’s dogs were exposed to the tone and food; Skinner’s rats could press the bar and receive food. In contrast, observational learning is indirect in the sense that someone (or something) else is interacting with the environment. An example of indirect classical conditioning might involve one child (the observer) witnessing another child (the model) being jumped upon by a dog and acting fearful. It is likely that even though the dog did not jump on the observer, he will be fearful in its presence. An example of indirect instrumental conditioning might involve a child witnessing another taking a cookie from a cookie jar. We all know what will happen next.

Language is a consensually agreed upon collection of arbitrary symbols representing objects, movements, properties, and relationships among objects and events. Through language, humans can provide similar information to that provided through observational means, thereby resulting in similar behaviors. For example, one can tell a child that a particular dog might jump on him, or that there are cookies in a cookie jar. Olsson and Phelps (2004) compared direct, observational, and linguistic learning of a fear of faces. Human subjects were either exposed to a shock (direct learning) in the presence of a picture of a face, observed another person’s emotional reaction to the face (indirect observational), or were told that the picture of the face would be followed by shock (indirect symbolic). All three groups subsequently demonstrated similar fear reactions to the picture of the face. The three types of experience represent different paths to the same adaptive learning (see also Kirsch, Lynn, Vigorito, and Miller, 2004). We will now consider each of the forms of indirect learning in greater depth.

Distinguish between and give examples of direct and indirect adaptive learning.

Albert Bandura is to the study of observational learning what Pavlov is to the study of predictive learning (classical conditioning) and what Thorndike and Skinner are to the study of control learning (instrumental or operant conditioning). Bandura conducted some of the pioneering research demonstrating observational learning in children and developed a comprehensive theory of social learning (Bandura, 1962, 1965, 1969, 1971, 1973, 1977a, 1977b, 1978, 1986; Bandura, Ross, & Ross, 1961, 1963a, b; Bandura & Walters, 1963). Much of his empirical research relates to the four-stage model of observational learning he proposed to analyze and organize the voluminous literature (see You Tube video). The four logically necessary observational learning processes include: attention, retention, production, and motivation. That is, in order for an observer to imitate a model it is essential that the observer attend to the model’s behavior, retain information regarding the important components, have the ability to produce the same actions, and be motivated to perform. This is a “chain as strong as its weakest link.” If any stage is missing, imitation (but not necessarily learning) does not occur. We will now review some of the major variables found to influence each of these stages.

Watch the following video demonstrating the stages of observational learning:

Much of what we have learned about direct predictive and control learning applies to observational learning as well. Human beings predominantly rely upon the senses of vision and hearing to adapt to environmental demands. In order to imitate what we see or hear, we must be attending to critical elements of modeled behavior. Factors such as intensity, attractiveness, and emotionality will enhance the salience of a stimulus, increasing the likelihood of imitation (Waxler & Yarrow, 1975).

Prior learning experience, in the form of perceived similarity to self, significantly affects the probability of attending to different models in one’s environment. One is more likely to attend to individuals of the same sex, age, race, ethnicity, social class, and other variables. Girls and boys are universally treated very differently. Starting from birth, they are dressed differently, given different hair styles, and encouraged to engage in different behaviors. Girls are encouraged to “play house” and boys to “play ball.” When children first start to speak, they soon learn to categorize the world into “mama”, “dada”, boys and girls, and assign themselves gender and age identities. These assignments impact upon their choices of models throughout their lives. Selective indirect learning experiences influence family responsibilities in all cultures and education and career opportunities in technologically enhanced cultures.

In addition to those similar to them, people are most likely to attend to others designated as “authority figures” or “role models”, whether these designations are earned or assigned. In a Stone-Age culture such as the Nukak, there are very few potential models. Elders are most likely to be considered authority figures with special powers or abilities attributed to some. In our culture, every day we come into contact with a large number of potential models based on kinship, grade-level, occupation, organization-membership, friendship, etc. In addition to these “live” examples we are exposed to a countless number of potential models on the radio, TV, internet, etc. The likelihood of paying attention to a model can be based upon perceived functional value. For example, one may seek out a particular relative or friend or search for a particular website in order to obtain knowledge or skills that relate to a current problem. Sources of authority may include elders, teachers, clergy, “experts”, or celebrities. For example, it was demonstrated that 11- to 14-year old women performed better on a task modeled by a cheerleader as opposed to a lower-status female model (McCaullaugh, 1986).

Watch the following video for a demonstration of observational learning by an infant:

In the previous chapter, we described Nukak foraging trips. Many of the skills required for hunting, gathering, and preparing food are acquired through observational learning. “Every Nukak knows how to make virtually everything he or she will need during his or her lifetime, and the basic material for making these items can be found within the band’s territory” (Politis, 2007, 229). The blowpipe, fashioned from cane, is the primary hunting tool. Darts made from palm trees are shaped, sharpened, and tipped with the paralyzing drug curare obtained from the bark of the parupi vine. Nukak men spend considerable time making 7- to 10-foot long blowpipes, caring for and maintaining them. Smaller blowpipes (less than 6-feet-long) are constructed for young boys to play with and acquire expertise. Male adolescents often accompany their fathers on foraging trips with scaled-down blowpipes.

Women and girls are responsible for grinding various fruit and seeds. The mortars are created from sections of tree trunks and the pestle is a straight stick with one end flattened. Women also fashion clay pots for the storage and transport of fruits and liquids, fiber hammocks, and baskets of different sizes made from vines (Politis, 2007, 210-217).

Bartlett (1932) conducted memory research with meaningful materials such as stories or fables. He found that in retelling stories, people tended to alter them in systematic ways. He concluded that memory is a reconstructive rather than a reproductive process involving leveling (simplification), sharpening (exaggeration of specific details), and assimilation (incorporation into existing schemas). Thus, when we observe a model, we are not storing a “videotape” of what we see and hear but rather encoding our observations in such a manner that we can reconstruct what occurred at a later time. For example, if someone is demonstrating how to open a combination lock, we will probably try to memorize verbal instructions (e.g., turn clockwise past 0 to 14, turn counter-clockwise past 0 to 28, etc.). It will decrease the likelihood of encoding errors if this complex behavior is broken down into manageable units. The instructions should be repeated at a slow pace, out loud or silently, to improve retention and increase the likelihood of opening the lock. Adults who verbally coded modeled events and actively rehearsed afterward were much better at imitating what they observed than adults who did not code the events or were prevented from rehearsing (Bandura & Jeffrey, 1973). Later in this chapter, we will review research related to memory and forgetting in more depth.

When I was a child, I loved the TV character Superman. I would join my friends with a towel draped around my neck and try to fly. I have yet to take off. Obviously I had attended to Superman and remembered what he did. As I grew up, I continued to watch TV and have role models. Many of these, like Superman, possessed natural abilities that escaped my genes or skills that escaped my learning history. In the former case, I was forced to be serene. In the latter, with “courage”, I could acquire the component responses necessary to imitate the model. In Chapter 14, we will consider the topic of self-control and I will describe a research-based process for changing one’s behavior in a desired fashion. Still, I wouldn’t suggest trying to fly.

We can see people doing pretty much anything on the internet. Fortunately, it is not necessarily the case that “people see, people do.” In our complicated, open, media-dominated world, we are constantly exposed to models performing undesirable, illegal, or dangerous acts. We do not automatically try to imitate everything we observe. Often, the outcome is an example of latent observational learning. The rats in Tolman and Honzik’s (1932) group that did not receive food at the end of the maze learned the correct route, but didn’t show it. We often attend to models, remember what they performed, and possess the ability to imitate their actions but do not in the absence of an incentive.

In a classic study, Bandura (1965) showed boys and girls a film depicting a child displaying unusually aggressive acts with a Bobo doll punching bag (e.g., hitting the doll with a hammer – see below). In one version of the film, an adult observed the child and punished his aggressive acts. In a second version, the adult praised and provided candy to the boy. There was no consequence in a third condition. Afterwards, the children were placed in a room with a Bobo doll and observed to see how often they displayed the unusual aggressive acts. The findings indicated that boys committed more of these aggressive acts than girls in all three conditions. Both boys and girls were more likely to imitate the model that was rewarded at the end of the film than the model that was punished. Afterwards, children in the 3 groups were offered treats to imitate what they observed in the film. As was true in Tolman and Honzik’s group that was switched from non-reward to reward, there was a dramatic increase in the number of aggressive acts. Clearly, the children had learned and retained what they observed. The likelihood of imitation was influenced by both the consequences displayed in the film as well as the contingencies implemented in the playroom (see Figure 6.2). 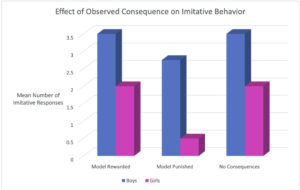 Figure 6.4 Mean number of different matching responses reproduced by children as a function of response consequences to the model and positive incentives (Adapted from Bandura, 1965).

Watch the following video of observational learning procedures being used to reduce children’s fear of dogs:

In a classic series of studies (Bandura, Grusec, & Menlove, 1967; Bandura and Menlove, 1968), children with fears of dogs were shown films of other children interacting with dogs exhibiting progressively-threatening behaviors. This indirect observational learning procedure was very successful in reducing or eliminating the children’s fears.