Chapter 12: The Science of Psychology and Human Potential

The acorn/mighty oak metaphor was used at the beginning of the first chapter to describe how the realization of human potential results from the impact of experience on our genome. Learning to use our abilities to imagine, communicate and manipulate enabled us to understand and change our world. Technological developments enabled us to overcome the limitations of our genome by enhancing those basic abilities. Our senses are seemingly infinitely expanded by devices such as the telescope and microscope. Digitization has resulted in the soon-to-be-reached reality of every individual having the accumulated knowledge of our species at their fingertips combined with the ability to instantaneously communicate with others, no matter the distance. Dobzhansky (1960) described humans as a supraorganic species. Collaboration enables us to magnify the potential that resides within individuals. It was necessary not only to imagine Manhattan, communicate with each other, and use tools. We had to work as a team to produce the final result. It would appear that the potential of our species is unlimited. In the 1700s, the scientists John Michell and Pierre-Simon Laplace imagined gravitational fields so powerful that not even light could escape. For this reason, these imaginary fields were described as “black holes.” In April of 2019, the first image of a black hole appeared in newspapers throughout the world. More than 200 scientists on four continents collaborated, simultaneously using eight radio telescopes to produce the following image: 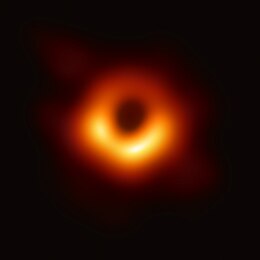 Figure 12.2  The supermassive black hole at the core of supergiant elliptical galaxy Messier 87, with a mass ~7 billion times the Sun’s, as depicted in the first image released by the Event Horizon Telescope (10 April 2019).

Unfortunately, these wonderful abilities to imagine, communicate, manipulate and collaborate evolved under conditions where selfishness, greed, impulsivity, fear of strangers and aggression were all adaptive. Now, these tendencies threaten the very survival of our species. At this time, it is not clear that what appears to be our unlimited potential will be realized. It may be that surviving on earth will be the human species’ greatest challenge. Let us collectively imagine, communicate, manipulate and collaborate to protect ourselves and build a better earth while exploring the universe. “Human imagination” is in the Public Domain