The exhilarating ripple of her voice was a wild tonic in the rain.

Humans rely heavily on hearing as well as vision to survive and enjoy our surroundings. Sound can help us detect the presence of and locate objects which are at great distances or out of sight. Speech communication relies on the ability to hear. If you are similar to most college students, you spend a considerable amount of time listening to music. As expressed by Fitzgerald, the voice of a loved one can soothe and exhilarate us.

Our ears detect and process the vibrations produced by sound waves. When graphed, the (loudness) of a sound is indicated by the height from top to bottom of a wave cycle. The (low bass vs. high treble) is a function of the frequency of waves per unit of time (see Figure 3.11). 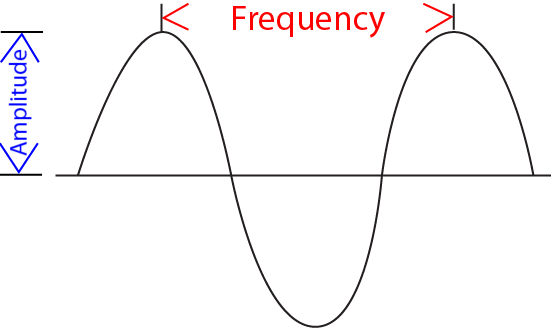 Watch the following video for a description of how wavelength, frequency, and amplitude affect hearing:

Loudness is measured in decibels. Figure 3.12 shows the decibel levels of some common events. Please be careful about exposing yourself to loud sounds. It is possible to permanently damage your hearing by prolonged exposure to loud music, whether at concerts or when listening with headphones.

Figure 3.13 shows the major parts of the ear involved in the transduction process converting sound waves into electronic signals transmitted to the brain, primarily the temporal lobe of the cerebral cortex. 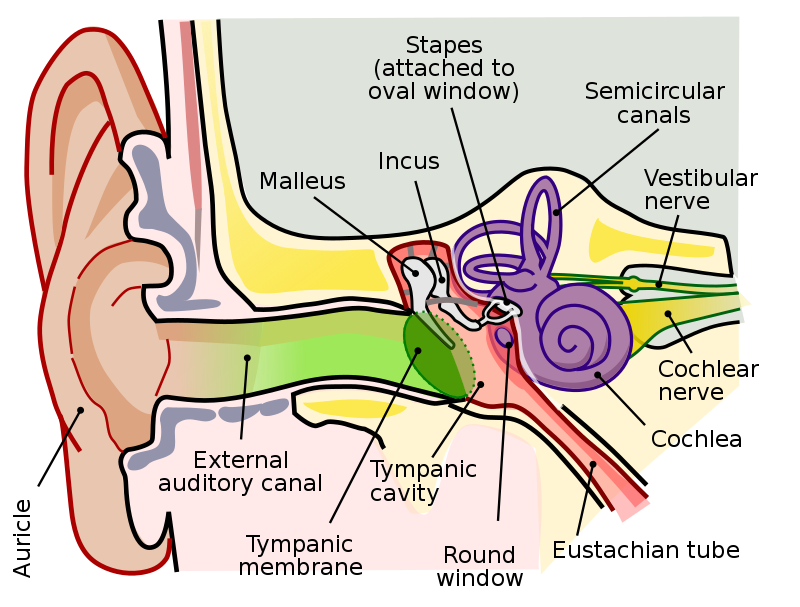 The ear can be divided into the , , and . The outer ear includes the ear flap, ear canal, and eardrum. The middle ear is in an enclosed chamber behind the eardrum and includes the three tiniest bones (ossicles) in the body often described as the hammer, anvil, and stirrup. The inner ear consists of the cochlea, a snail shaped tube filled with fluid. When sound waves reach the eardrum they cause it to vibrate. These vibrations are amplified by the ossicles and transmitted to the cochlea. The limits of human hearing are determined by the nature of tiny hair cells contained within the basilar membrane lining the cochlea (see Figure 3.14). Starting at the end (apex) of the cochlea, the hair cells are responsive to increasing frequencies of sound waves. Human hearing extends approximately from 20 to 20,000 Hz (vibration cycles per second). The neural information from the basilar membrane is transmitted to the auditory nerve and then to the brainstem. 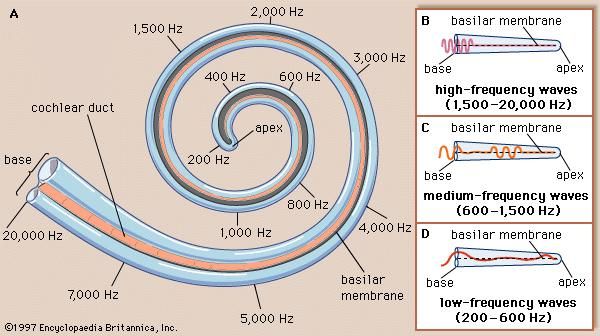 One of the very nicest things about life is the way we must regularly stop whatever it is we are doing and devote our attention to eating.

Luciano Pavarotti and William Wright, from Pavarotti, My Own Story

Figure 3.15 portrays the different cells for salty (Type I), sweet, umami (flavor of glutamates) and bitter (Type II), and sour (Type III) tastes.  Figures 3.16 and 3.17 show the neural pathways for the senses of taste and smell. The surfaces () of the nasal passage and tongue contain receptors sensitive to specific odors and tastes.  Stimulation of the smell and taste receptors transmit signals terminating in the temporal lobe of the cerebral cortex. The senses of smell and taste are not as fundamental to human survival as vision and hearing. Still, they play an important adaptive role in the identification of poisonous foods and chemicals. Eating is also one of the basic pleasures of life. Smell and taste work in concert in helping us discriminate flavors and enjoy the spices of life. 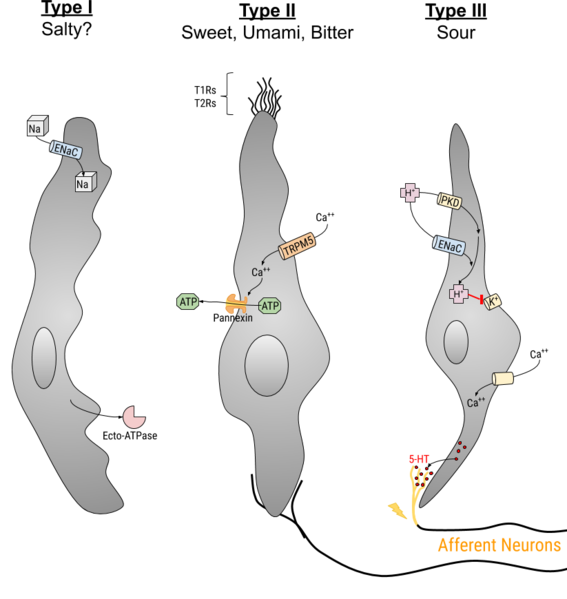 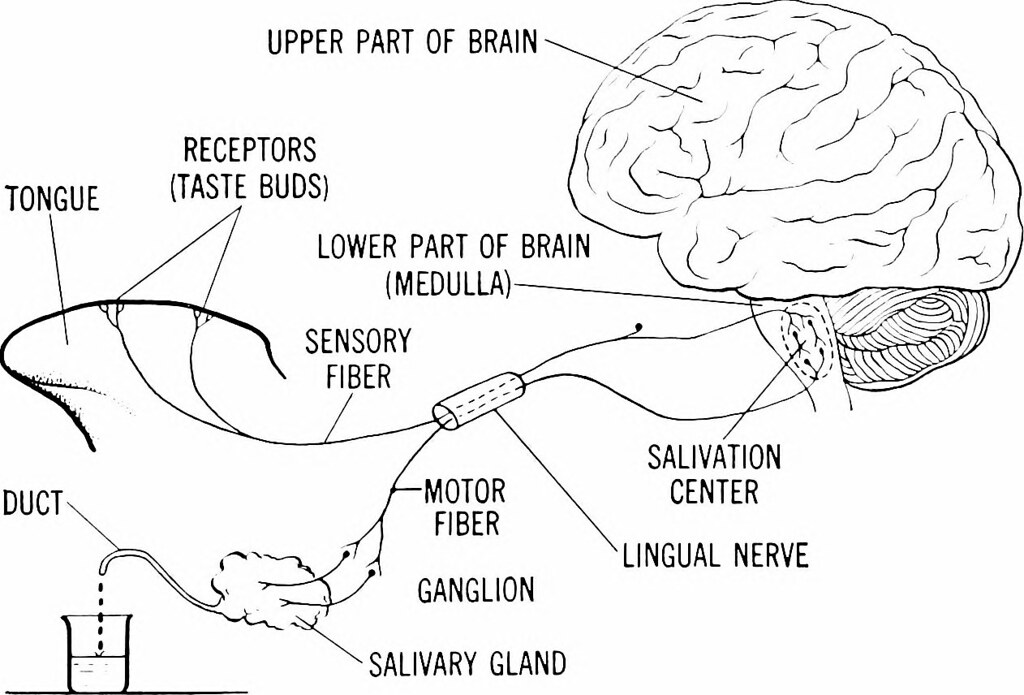 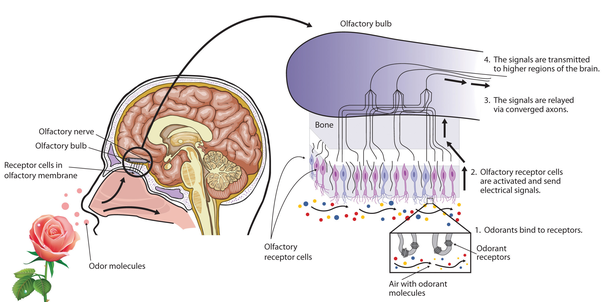 Figure 3.18 portrays the different specialized skin receptors for touch, temperature, and pain. Information from these receptors is relayed to the primary somatosensory area of the parietal lobe in the central cortex.

Two-point discrimination thresholds for the sense of touch vary according to the amount of brain space dedicated to the body part in the somatosensory cortex (see Figure 2.2). The fingertips and lips which have disproportionate amounts of brain space are the most sensitive areas, typically requiring only 2-4 mm for one to be able to report being touched in two different spots. In comparison, it might take from 10-15 mm on the palm of one’s hand or 30-40 mm on one’s back to detect being touched in two different spots.

Sherrington (1906) was the first to demonstrate that certain types of intense stimulation could elicit reflexive responses and responses by the autonomic nervous system along with the sensation of pain. When a high threshold is reached for mechanical (intense pressure or injured tissue), thermal (extreme heat or cold), or chemical (toxins) stimulation, a neural signal is transmitted to the central nervous system. A stimulus likely to result in injury will elicit a withdrawal reflex at the level of the spinal cord within half a second (see Figure 3.19). 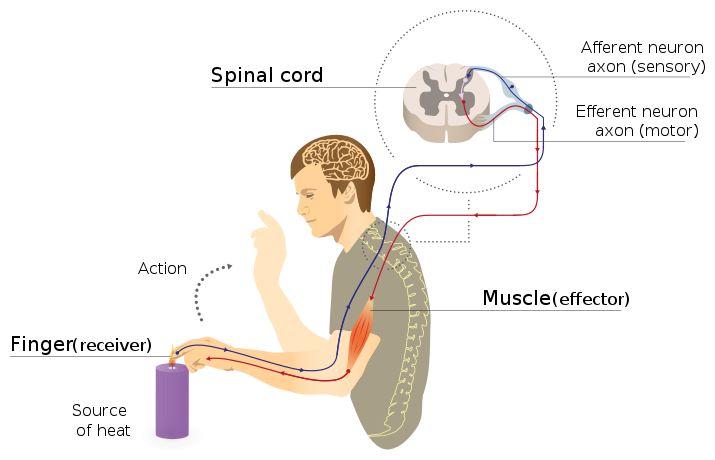 Animals, including human beings, are able to perform amazing feats of balance. These feats require coordination between the vestibular system in the ears, the eyes, and (i.e., sense of muscle location and movement). Attached to the cochlear in the inner-ear (see Figure 3.12) is a pretzel-like structure called the . The three circles are filled with fluid and contain hair cells which respond to the position of and speed of movement of the head in three-dimensional space. This information is transmitted to the thalamus and parietal lobe of the cerebral cortex. There it is combined with information obtained through the eyes regarding the body’s position in space and sensors of the muscles and joints. Integration of this information enables us to maintain our balance while stationary or in motion.

A common test to determine whether your proprioceptive sense is functioning properly is to see if you can touch the tip of your nose with your eyes closed. This would only be possible if you are receiving accurate non-visual information regarding the location of your body parts (see Figure 3.20). 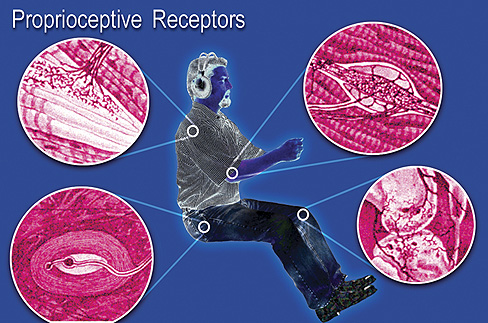 Our senses helped humans to survive on earth under very different geographic and climatic conditions for tens of thousands of years. For practically all of this time we lived as nomadic hunter-gatherers. It is only within the past 11,000 years that domestication of plants (i.e., agriculture) and large animals permitted production of sufficient food surpluses to remain in one location (Diamond, 2005). This eventually led to establishing larger and larger social units, starting with bands and tribes, eventually becoming chiefdoms and states (Diamond, 2012). Recalling the picture of Manhattan, it is only within the past 400 years that the scientific method has resulted in technologies substantially transforming the human condition. Prior to then, we adapted to the environmental conditions under which we biologically evolved. Now we must adapt to a human-constructed environment. This technology-enhanced world frees us from dedicating our lives to fulfilling basic survival needs. We are able to contribute to our social units in an increasing variety of ways. At the same time, technologies have resulted in dangers for which we are not genetically prepared. Some of these dangers result from limitations of our senses. For example, industrialization resulted in production of carbon monoxide, a gas which did not previously exist on earth. Humans cannot smell carbon monoxide, resulting in many accidental deaths from exposure.

Technological enhancements of our senses (primarily vision) were essential to much of the progress occurring over the past 400 years. It is common to refer to Galileo when discussing the beginning of the scientific revolution. One of the ways in which sciences progress is by developing instruments permitting the observation of new natural events. Galileo used a telescope to discover four of Jupiter’s moons. The observation that these moons revolved around Jupiter and not the earth was inconsistent with the prevalent belief that the earth was the center of the universe. Although extremely controversial at the time, it is now impassionately accepted that the earth revolves around the sun rather than the other way around. Key to Galileo’s observations and conclusions was the ability to see objects not visible to the naked eye. Much of the scientific knowledge acquired since Galileo’s time has required similar enhancements of our senses. Examples include the microscope and amplification of sound. It is fascinating to consider the possibilities for enhancement of human senses and performance along with the ethical implications (Khushf, 2005).

Figure 3.11 “Sound wave” by Justin Evans is in the Public Domain, CC0

Figure 3.12 “Decibel levels” by OSHA is in the Public Domain, CC0

Figure 3.14 “Cochlea” by Joseph E. Hawkins, Encyclopedia Brittanica is in the Public Domain

Figure 3.16 “Neural pathway for taste” by flickr is in the Public Domain

Figure 3.17 “Neural pathway for smell” by quora is in the Public Domain

Figure 3.18 “Touch receptors” by Sunshineconnelly is licensed under CC BY 3.0

Figure 3.19 “Reflex arc” by MartaAguayo is licensed under CC BY-SA 4.0

Figure 3.20 “Proprioceptive receptors” is in the Public Domain, CC0

the loudness of a sound, indicated by the height from top to bottom of a wave cycle

an enclosed chamber behind the eardrum that includes the three tiniest bones (ossicles) in the body described as the hammer, anvil, and stirrup

contains the cochlea, a snail shaped tube filled with fluid

sense of muscle location and movement

three circles filled with fluid and containing hair cells which respond to the position of and speed of movement of the head in three-dimensional space; this information is transmitted to the thalamus and parietal lobe of the cerebral cortex where it is combined with information obtained through the eyes regarding the body’s position in space and sensors of the muscles and joints; Integration of this information enables us to maintain our balance while stationary or in motion