From the song Personality by Lloyd Price

By , we usually mean an individual’s distinctive characteristics, qualities, and behaviors.  As the Lloyd Price song describes, do you think you “got” a personality? How would you describe your personality? As a follow-up to the developmental psychology chapter and introduction to the chapter on personality, it might be fun to engage in a bit of romantic fantasy and develop your priorities for a partner in life. Try to construct an ordered list of those personality qualities you consider most important for your partner. Research with college students surveying the desirable qualities college students sought in a potential mate resulted in the following list: ‘‘kind and understanding,” ‘‘religious,” ‘‘exciting personality,” ‘‘creative and artistic,” ‘‘good housekeeper,” ‘‘intelligent,” ‘‘good earning capacity” (i.e., provider), ‘‘wants children,” ‘‘easygoing,” ‘‘good heredity,” ‘‘college graduate,” ‘‘physically attractive,” and ‘‘healthy” (Buss & Barnes, 1986).

Would you list similar qualities to those of the college students in the research study? Many of those qualities can be considered ; an individual’s patterns of behavior (including thoughts and feelings) that are consistent across time and situations. Traits often refer to extreme points on a continuum; for example, kind vs. unkind (mean), intelligent vs. unintelligent (slow), easygoing vs. serious, exciting vs. unexciting (dull), creative vs. uncreative (rigid), and religious vs. irreligious in the list above. Other terms in the research study refer to extreme points on a continuum of physical characteristics (e.g., attractive vs. unattractive, healthy vs. unhealthy, good heredity vs. poor heredity) or to specific behavioral outcomes (e.g., college graduate vs. not, good provider vs. not, wants kids vs. not, good housekeeper vs. not). How many of these qualities would you include on your list? Do you agree with including each of them? What important qualities do you think were left out? Would you consider these qualities to be a description of his/her personality? Do you think your parents would have the same priorities as you?

In a study, college students and their parents were asked to rank these 13 different traits for desirability in a potential long-term life partner for themselves or their children (Perilloux, Fleischman, & Buss, 2011). The traits were scored such that the value (between 1 and 13) indicated importance of the trait. The average rankings for sons, daughters, fathers, and mothers are listed in Figure 9.1. Before you look at the findings, you might find it interesting and informative to rank order these 13 traits based on your own priorities. Assign the score of 13 to your highest priority characteristic and 1 to your least important. By ranking the items yourself, you can see how your priorities compare to the college students of your own sex, the opposite sex, and fathers and mothers in the study.

Figure 9.1.  Overall rankings of desirable traits for a mate by male and female college students and their parents (adapted from Perilloux, Fleischman, & Buss, 2011).

The items are listed with the highest priority (i.e., score closest to 13) at the top and lowest priority (i.e., score closest to 1) at the bottom. If you are a woman, did you rate kindness as most important, followed by intelligence, an “exciting” personality, attractiveness, health, and being easygoing? If you are a man, did you consider attractiveness most important, followed by intelligence, kindness, “exciting” personality, health, and being easygoing? Are you surprised or not by the fact that male and female college students included the same six items as most important? Are you surprised by the differences in their rankings of these six qualities? It is also informative to compare the means as well as the rankings. For example, even though an exciting personality is rated third by women and fourth by men, the means are almost the same. If you are seeing someone, would you be interested in how they rank the different traits? It might be fun, not to mention informative, to compare and discuss the results. If you are not seeing someone, would you be interested in the priorities of a potential date? How about sitting them down and giving them the list as an “ice breaker?” At least you can find out if they are easygoing! Good luck!

Are you at all surprised by the differences between parents and their children? Religiousness, health, earning capacity, and housekeeping seem a lot more important to parents than to college students. In contrast, attractiveness and an exciting personality were more important to the students. How do you think your parents would rank the traits if they were considering your potential partner in life? Let’s make you a pretend parent again. If you were ranking the items for your pretend child, would you score them the same as you did for yourself or would your rankings be similar to the parents in the study? Would things change if your pretend child was the other sex? Can you relate to where your parents may be coming from? Do you have a little brother and/or sister? How would you rank the different traits if you were choosing a life partner for them? Would the rankings be more similar to the ones you use for your children or for yourself? Do you remember the marshmallow test from Chapter 1? Choosing a partner in life may be the most important “marshmallow test” you ever take. I mentioned that you are more likely to purchase healthful foods if you shop from a list. Make sure you have the right list with you when you go shopping for a partner in life! I hope this exercise helps.

Speculation regarding the structure and causes of human personality date back to the time of Hippocrates (460-370 BC). The Greek physician, best known for medicine’s Hippocratic Oath, proposed that our moods and behavior were influenced by the relative amounts of four body liquids (“humors”): blood, black bile, yellow bile, and phlegm. Later, Galen (AD 131–200) expanded upon Hippocrates, suggesting excessive quantities of any of these liquids would lead to a specific, inherited : “sanguine” (outgoing, impulsive, and creative) for blood, “melancholic” (shy, cautious, and moody) for black bile, “choleric” (aggressive, goal-directed, and ambitious) for yellow bile, and “phlegmatic” (kind, relaxed, and reliable) for phlegm (Kagan, 1998).

The idea expressed by Hippocrates and Galen, that human personality can be categorized into distinct types, survived through the centuries and served as the basis for trait theory. This 2500 year history is an enormously long-lasting example of “the more things change, the more they stay the same.” Hippocrates and Galen proposed four basic temperaments. As you will see, decades of research on traits has sometimes seen this number substantially expanded, sometimes shrunk, and more recently, increased by one to five (see below). Eventually, theorists returned to considering innate differences in temperaments. We’ve come a long way in two-and-a-half millennia but do not appear to have moved too far!

Hippocrates and Galen thought that four different human temperaments (i.e., personalities) resulted from the relative concentrations of blood, black bile, yellow bile, and phlegm in the body. Today, this might strike you as absurd, and indeed, we now know that it is incorrect. Hippocrates and Galen’s belief might be considered a theory of personality. A theory is a scientific schema used to provide a cohesive network of relationships between independent and dependent variables. As such, theories attempt to explain as much of nature as possible (be it physical, chemical, biological, or psychological) with as few assumptions as possible. Hippocrates and Galen proposed a very simple theory of personality based on the four humors. The most important characteristic of a theory is that it is testable. It must make specific predictions concerning the relationships between independent and dependent variables. In that regard, Hippocrates and Galen proposed a useful theory since it was testable. We now have the necessary tools and technologies to measure the precise quantities of the four humors and whether they relate to the tendencies to behave in outgoing or shy, aggressive or passive, or other ways. In terms of theory construction, it is better to be wrong than vague. Knowledge and understanding are advanced when we know that something is not true. Knowledge and understanding are not advanced when a theory is so vaguely stated that it can account for any result. We will describe three different theoretical approaches to the understanding of human personality: Trait theory, Freud’s psychodynamic theory, and learning theory.

The psychological study of personality can be said to have originated with Gordon Allport’s dictionary search resulting in a listing of 4500 trait-related words (Allport & Odbert, 1936) and his publication of Personality: A psychological interpretation (Allport 1937). Raymond Cattell (1943; 1946) shrunk Allport’s list to 171 by combining synonyms (e.g., extroverted, outgoing, boisterous, etc.) and eliminating extremely rare examples (e.g., obscurant and obsequious among the “obs”s, etc.). He then scored a large sample of adults on these 171 items. Cattell used the statistical technique, factor analysis, to determine the extent to which the effects of the different items overlapped. Based on the results, Cattell was able to reduce the number of primary human personality factors to sixteen. Figure 9.3 lists the 16 primary factors along with descriptions of the types of behaviors characteristic of low and high scorers.

In 1949, Cattell published the very popular 16 Personality Factor Questionnaire (16PF), currently in its fifth edition (Cattell, R. B., Cattell, A. K., & Cattell, H. E. P., 1993). The latest edition includes 185 multiple-choice items designed to assess the 16 primary and five global traits. The items ask about the occurrence of concrete, everyday behaviors, rather than asking the person to simply rate themselves on the traits. Examples include such items as:

Figure 9.5 lists the characteristics of low and high scorers on the Big Five personality dimensions. How do you think you would score on these five dimensions? 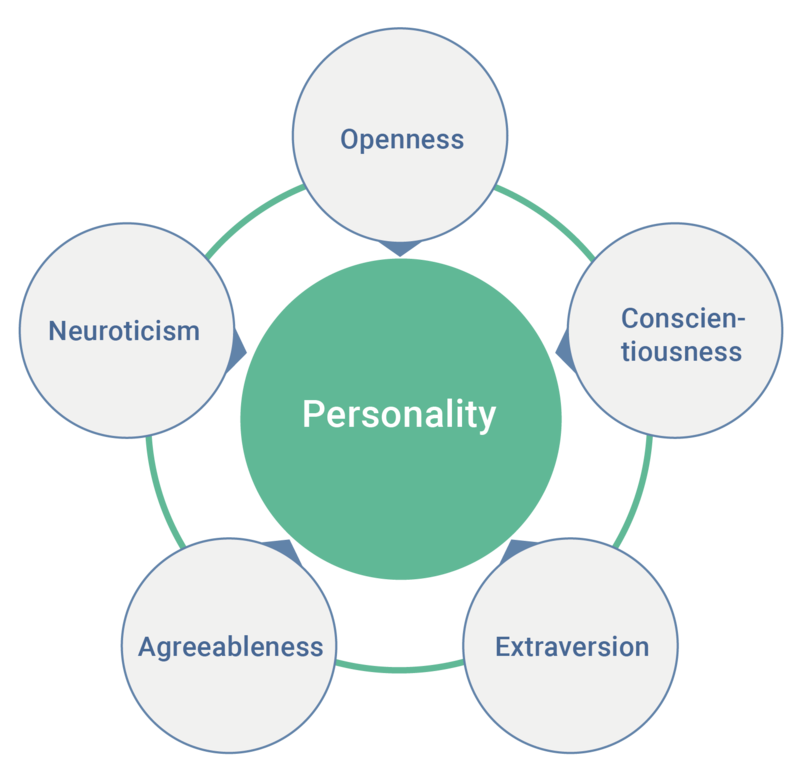 The British psychologist, Hans Eyesenck, felt that the combination of introversion/extraversion and neuroticism/emotional stability was adequate to capture the personality of normal (i.e., non-psychotic) individuals. Do you agree? Do you think the “Big Five” factors are adequate to describe your personality or do you need all 16 items? Which do you prefer, the items listed in the Perilloux et al. (2011) study, the 16 primary traits, the Big Five, or Eysenck’s two dimensions, as a tool for assessing and describing your personality? Returning to thinking about the qualities you would like your life partner to possess; which of these approaches would you use? How would you like him/her to score on each of the items?

Contemporary personality theorists have concluded that Eysenck’s two (or three) dimensions are inadequate and Cattell’s 16 factors unnecessarily overlapping. The Big Five has consensually emerged as being adequate to describe the basic components of human personality (Cattell, 1996; Digman, 1989; Goldberg, 1981; McCrae & Costa, 1987; McCrae & John, 1992). McCrae and his colleagues translated a Big Five self-report inventory into 29 languages and administered it to almost 18,000 individuals belonging to 56 nations. The data supports the applicability of the Big Five personality dimensions across these diverse cultures (Costa, Terracciano, & McCrae, 2001; McCrae, 2002; McCrae & Allik, 2002; McCrae, Terracciano, et al, 2005). Interestingly, consistent sex differences have been found across 55 cultures (Schmitt, 2005; Schmitt, Realo, Voracek, & Allik, J., 2008). In most countries, women were found to score higher than men in neuroticism, extraversion, agreeableness, and conscientiousness. Differences in the sexes were greater in technologically-enhanced, egalitarian cultures than more primitive, paternalistic cultures. It is under more egalitarian educational and economic conditions that biology does not constitute destiny for women and they are better able to fulfill their potential by expressing their individuality.

Figure 9.2 “The four temperaments” by RMN is in the Public Domain

Figure 9.5 “The Big Five dimensions of personality” by Anna Tunikova is licensed under CC BY 4.0

the idea expressed by Hippocrates and Galen, that human personality can be categorized into distinct temperaments presumed to be inherited causes of moods and behavior