The beginning of human knowledge is through the senses, and the fiction writer begins where human perception begins.

We have completed consideration of the stimulation processed through Aristotle’s five major senses along with balance and movement. At this point the body has received input that something has happened in an exclusively bottom-up process. With the exception of painful stimuli posing immediate danger triggering a spinal withdrawal response, sensory information is relayed to the brain for further processing.

Not all environmental stimulation relates to survival or achievement of one’s goals. Adapting to one’s environment requires interpretation and prioritization. Once an event is detected, it is important to determine where it originated and what it is. One way the brain has evolved to interpret and prioritize sensory input is the development of (Hubel and Wiesel, 1959, 1962). These are cells in the visual cortex which respond to stimuli likely to convey adaptive information. Specialized cells have been discovered for movement, lines, edges, and angles. These characteristics are frequently associated with biologically significant stimuli. For example, movement might signal the presence of a predator. Lines and edges could signal the presence of solid stationary objects or a sudden drop off in height. As shown in Figure 3.21, even infants and other animals are cautious upon approaching a visual cliff (Gibson and Walk, 1960). 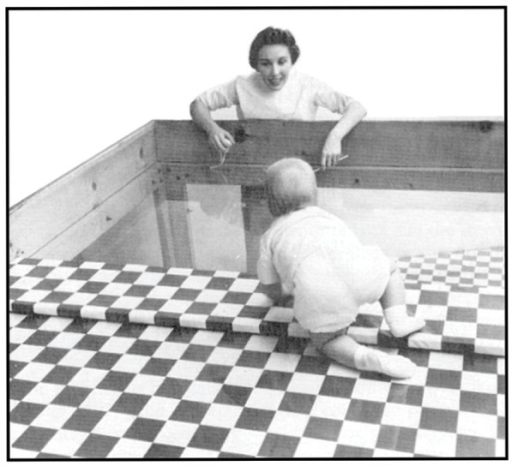 The ability to perceive depth (the relative location of objects) and distance (how far objects are from you) in three-dimensional space is essential to survival and responsible for the visual cliff. In addition to feature detectors for edges and lines, there are additional visual cues which facilitate depth perception. Some of these are dependent on the information obtained from both of our eyes (i.e., ) whereas others are based upon the information available to one eye (i.e., ). Not all animals with two eyes have them located so that they are facing in the same direction (e.g., fish). When both eyes face forward there is overlap as well as differences in the visual fields providing potential information regarding the location of objects. The human visual field covers approximately 200 degrees of which there is 120 degrees of overlap between the two eyes.

The major binocular cues are and . Retinal disparity results from your eyes being separated in space, producing stimulation from slightly different angles. The stimulation from objects which are far away is much more similar for both eyes than the stimulation from close objects. Similarly, your two eyes converge (i.e., move closer to each other) as objects move closer. This provides depth and distance information from the muscles controlling eye movements.

It is counter-intuitive but most of the cues related to perceiving objects as three-dimensional are monocular and two-dimensional.  Artists take advantage of such cues in creating realistic images. The major monocular cues are linear perspective, occlusion (interposition), textual gradient, relative size, size familiarity and position relative to the horizon (Figure 3.22).

As described in Chapter 1, the Gestalt psychologists believed that perception was primarily a involving meaningful units rather than a combining elements of sensation. Only a process including the effects of prior experience could meaningfully interpret often ambiguous sensory information. Determination of what constitutes the figure and ground in an image provides an example. The images in Figures 3.23 and 3.24 may be perceived in two ways. The first may be perceived as either a black vase on a white background or two white heads facing each other on a black background. The second image may be seen as either a saxophone player on a white background or a face on a black background. Ordinarily you will see one of the two possibilities and not the other. Once informed of the other possibility one may cycle back-and-forth between the two perceptions demonstrating the impact of prior experience upon the organization and interpretation of sensations. Another way of influencing interpretation of an ambiguous image is to establish a perceptual set through exposure to conceptually related images or words. For example, if you first saw pictures of a table and a chair, or read the words “table” and “chair”, you would be more likely to perceive the vase than the faces. If you saw pictures of an arm and leg or read the words, you would be more likely to perceive the faces. The establishment of a perceptual set is a clear cut example of top-down processing of sensory information. 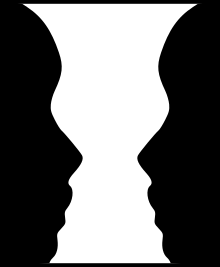 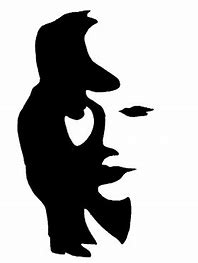 Another example of top-down processing involving prior experience is . This refers to the fact that an object’s shape and size is perceived as remaining constant despite differences in orientation and location (see Figure 3.25).

Figure 3.25  Constancy of shape and size.

The Gestalt psychologists proposed several principles to account for the organization and perception of groups comprised of ambiguous elements. Their major principles include (Figure 3.26), (Figure 3.27) and (Figure 3.28).  You are likely to perceive the first drawing as consisting of alternating blue and black rows, the second as pairs of lines in three columns, the third as four curved lines consisting of four dots and the fourth as a complete circle and square.

Learning to read is an excellent example of the importance of Gestalt principles. Reading may be described as a sequence of steps establishing larger and larger meaningful units (i.e., gestalts). Eye-movement recordings reveal that individual letters are not initially perceived as units. With increased experience, we are able to integrate the components into a relatively small number of distinct letters followed by integration of letters into words. It has recently been demonstrated that we perceive the letters of words simultaneously (i.e., as a “gestalt”) not sequentially (Adelman, Marquis, and Sabatos-DeVito, 2010). Eventually, we are able to read aloud fluently by scanning phrases and sentences (Rayner, 1998). The role played by experience and top-down processing in the interpretation of letters is exemplified by the ambiguous second letters below. The first letter is usually perceived as an “H” and the second as an “A” (Figure 3.29).

Arguably, reading is the most important skill one can acquire to adapt to the modern human condition. We describe the elementary-school experience as emphasizing the three “R”s (reading, “riting” and “rithmatic.” “Reading is fundamental” in that it is essential to learning to write and acquiring quantitative concepts. The importance of reading will be considered further in Chapters 6 (Indirect Learning) and 8 (Developmental Psychology).

College As Education of your Senses

As described in Chapter 1, the college curriculum is designed to help you develop different perspectives with which you can understand and appreciate your life. Usually undergraduates take a course in art, music, or both. Such courses might be considered “education of the senses.” The fact that even bands of nomadic hunter-gatherers produce art and music suggest that there is something about our genetics which makes such activities intrinsically rewarding. In Chapter 4, we will discuss the role of motivation and emotion in realizing our potential as individuals and a species. Certainly, a developed appreciation of the different forms of human creativity enhances and enriches our lives.

College courses in art and music expose students to classic and current forms of human creativity. In the same way that reading requires constructing larger and larger “gestalts” (i.e., letters, words, phrases, sentences, etc.), the same can be true for art (lines, shapes, forms, patterns, etc.) and music (e.g., tones, chords, melodies, etc.). Your eyes and ears can be “trained” to detect elements and patterns of visual and auditory sensations. Courses in art and music analyze (i.e., determine the common elements of “good” art and music) and synthesize (i.e., relate different examples of art and art forms to each other) the creative and performing arts. In this way, such courses convey our current understanding of those defining human qualities which do not at first glance appear related to eating and surviving but rather to “What’s it all about?”

Watch the following video describing the fundamental elements of design:

Watch the following video describing how to appreciate the five fundamental elements of music:

There is a saying that you get out of life what you put into it. The amount of time and effort you dedicate to any activity will influence how proficient you become. This applies to your schoolwork and grades, but the college experience provides other possibilities for developing your potential. There are usually many extra-curricular activities available for you to sustain existing hobbies and interests and explore new ones. At the end of the next chapter, I will describe a strategy for objectively describing your current self and ideal self. This will provide an opportunity to engage in soul-searching concerning the knowledge, skills, and attitudes you would like to acquire in your immediate and long term future. For now, I will restrict the discussion to activities related to sensation and perception. Colleges and universities frequently have clubs or activities dedicated to art (vision), music (hearing), food and/or wine tasting (taste and smell), dance and gymnastics (balance). There are often offices or campus units where you can obtain paid or voluntary positions requiring specialized applications of your senses. This would certainly be true if you worked as an artist for a campus newspaper or as a DJ for a college radio station. There is an old saying that there are three types of people: those who make things happen, those who watch things happen, and those who ask, “What happened?” In the same way that it is important to be an active student by trying to anticipate and answer questions based upon your course material, it is important to be active in your personal development during your college years. Try to explore your college environment, searching for growth opportunities. Try out and join interesting clubs. Attend special lectures and events. Make things happen!

Things do not happen. Things are made to happen.

Self-Control Projects to Educate your Senses

At the end of Chapter 1, I listed several recent self-control projects conducted by my students. Scattered among them were projects designed to increase and improve drawing and piano playing. As an example of how the psychology research literature can assist you in achieving your personal objectives, an experiment was conducted to compare two different approaches to learning to play the piano. It was found that practicing with both hands at the same time was better and more efficient than practicing with one hand at a time (Brown, 1933).

The psychology research literature can also play a valuable role in your self-control project. One of the skills a professional in any field must possess is the ability to locate and evaluate research. We live in a time in which we are inundated with information from the media and the internet. Reviewing the literature can feel like searching for a needle in a haystack. Even when you think you have located relevant information, how can you be certain you can trust the source? Fortunately, most professions attempt to facilitate this process by developing peer-evaluated databases. The American Psychological Association produces PsycINFO, which lists and abstracts peer-reviewed articles dating from the 1800s. In addition to psychology research, PsycINFO covers related fields such as medicine, neuroscience, and social work. Most college libraries will have a subscription to this extremely helpful and credible database.

Figure 3.25 “Perceptual constancy” by Roger Shepard is in the Public Domain, CC0

Figure 3.26 “Proximity” is in the Public Domain

Figure 3.27 “Similarity” is in the Public Domain

Figure 3.28 “Closure” is in the Public Domain

cells in the visual cortex that respond to stimuli likely to convey adaptive information; there are specialized cells for movement, lines, edges, and angles

Information obtained from both of our eyes

based upon the information available to one eye

results from your eyes being separated in space, producing stimulation from slightly different angles