The Space Shuttle Columbia disaster occurred on February 1, 2003, while reentering Earth’s atmosphere over Louisianaand Texas. The shuttle unexpectedly disintegrated, resulting in the death of all seven astronauts on board. The cause was later discovered to be damage to thermal shielding tiles from impact with a falling piece of foam insulation of an external tank during launch. It was the seventh known instance of this particular piece breaking free during launch.[14] As the shuttle re-entered Earth’s atmosphere at a speed of Mach 23 (23 times faster than the speed of sound), the wing experienced temperatures of 2,800 °F (1,540 °C). The damage from the insulation strike experienced during launch proved fatal as the shuttle disintegrated during the mission return.[11] NASA’s investigation team found melted aluminum on the thermal tiles and inside edges of the left wing of the spacecraft, supporting the notion that the Columbia’s destruction was due to hot gases that penetrated the damaged spot on the wing.[15]

Roger L.M. Dunbar of New York University and Raghu Garud of Pennsylvania State University procured a case description of what missteps NASA had taken that led to the Columbia spacecraft catastrophe. Mission control deemed that foam shedding was a not a safety factor prior to launch, believed damage of the shuttle panels were not a significant issue which in-turn delayed analysis on damages as of January 17, 2003, and denied mission action request between January 18 and 19. It was not until January 24, 2003, that mission control had classified the damage as a problematic issue. These missteps in communication between mission control and the debris assessment team inhibited a proper examination of the damages to the spacecraft.[11] 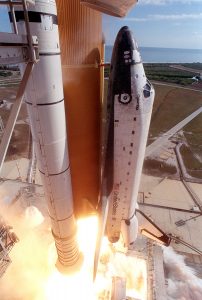 Photo:  Columbia lifting off on its final mission.