The Taj Mahal, Agra, India. Built in 1634 CE by Shah Jahan as a mausoleum for his favourite wife Mumtaz Mahall. 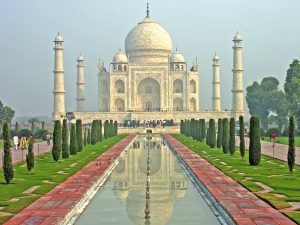 Original Photo by Dennis Jarvis License: This image was first published on Flickr. published on 29 April 2015 under the following license: Creative Commons: Attribution-ShareAlike. This license lets others remix, tweak, and build upon your work even for commercial reasons, as long as they credit you and license their new creations under the identical terms.

BBC documentary about the Taj Mahal

Leading structural engineer and designer Cecil Balmond goes beyond the well known histories of three celebrated monuments: Stonehenge, the Taj Mahal and the Great Pyramid, to reveal the hidden geometry at their cores.