The Tay Bridge disaster occurred during a violent storm on Sunday 28 December 1879 when the first Tay Rail Bridge collapsed while a train was passing over it from Wormit to Dundee, killing all aboard. The bridge—designed by Sir Thomas Bouch—used lattice girders supported by iron piers, with cast iron columns and wrought iron cross-bracing. The piers were narrower and their cross-bracing was less extensive and robust than on previous similar designs by Bouch. 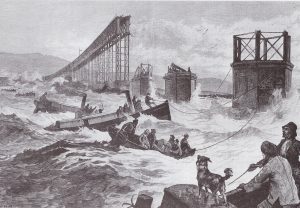 Bouch had sought expert advice on “wind loading” when designing a proposed rail bridge over the Firth of Forth; as a result of that advice he had made no explicit allowance for wind loading in the design of the Tay Bridge. There were other flaws in detailed design, in maintenance, and in quality control of castings, all of which were, at least in part, Bouch’s responsibility.

Bouch died within the year, with his reputation as an engineer ruined. Future British bridge designs had to allow for wind loadings of up to 56 pounds per square foot (2.7 kPa). Bouch’s design for the Forth Bridge was not used.

A photograph of the Original Tay Bridge from the north

Construction began in 1871 of a bridge to be supported by brick piers resting on bedrock. Trial borings had shown the bedrock to lie at no great depth under the river. At either end of the bridge, the bridge girders were deck trusses, the tops of which were level with the pier tops, with the single track railway running on top. However, in the centre section of the bridge (the “high girders”) the bridge girders ran as through trusses above the pier tops (with the railway inside them) in order to give the required clearance to allow passage of sailing ships to Perth.[1]

The bedrock actually lay much deeper than the trial borings had shown, and Bouch had to redesign the bridge, with fewer piers and correspondingly longer span girders. The pier foundations were now constructed by sinking brick-lined wrought-iron caissons onto the riverbed, and filling these with concrete. To reduce the weight these had to support, Bouch used open-lattice iron skeleton piers: each pier had multiple cast-iron columns taking the weight of the bridging girders. Wrought iron horizontal braces and diagonal tiebars linked the columns in each pier to provide rigidity and stability. The basic concept was well known, but for the Tay Bridge, the pier dimensions were constrained by the caisson. For the higher portion of the bridge, there were 13 girder spans. In order to accommodate thermal expansion, at only 3 of their 14 piers was there a fixed connection from the pier to the girders. There were therefore 3 divisions of linked high girder spans, the spans in each division being structurally connected to each other, but not to neighbouring spans in other divisions.[2] The southern and central divisions were nearly level, but the northern division descended towards Dundee at gradients of up to 1 in 73.[3]

The bridge was built by Hopkin Gilkes and Company, a Middlesbrough company which had worked previously with Bouch on iron viaducts. Gilkes, having first intended to produce all ironwork on Teesside, used a foundry at Wormit to produce the cast-iron components, and to carry out limited post-casting machining. Gilkes were in some financial difficulty; they ceased trading in 1880, but had begun liquidation in May 1879, before the disaster.[4] Bouch’s brother had been a director of Gilkes,[note 1] and on his death in January 1876, Bouch had inherited Gilkes shares valued at £35,000 but also owed for a guarantee of £100,000 of Gilkes borrowings and been unable to extricate himself.[5]

The change in design increased cost and necessitated delay, intensified after two of the high girders fell when being lifted into place in February 1877. The first engine crossed the bridge in September, 1877. A Board of Trade inspection was conducted over three days of good weather in February 1878; the bridge was passed for use by passenger traffic, subject to a 25 mph speed limit. The inspection report noted:

When again visiting the spot I should wish, if possible, to have an opportunity of observing the effects of high wind when a train of carriages is running over the bridge.[6]

The bridge was opened for passenger services on 1 June 1878. Bouch was knighted in June 1879 soon after Queen Victoria had used the bridge.