On the night of April 26, 1865, the passenger steamboat Sultana exploded on the Mississippi River seven miles north of Memphis, Tennessee. This maritime disaster is categorized as the worst in United States history. The explosion resulted in the loss of 1,547 lives, surpassing the total number of deaths caused by the sinking of the Titanic. The Sultana was overcrowded due to a soldier prisoner exchange towards the end of the United States Civil War. The overcrowding contributed significantly to the high death toll. Another reason for the high number of deaths is that the steamer was made mostly of wood, which was documented to have been completely engulfed in flames approximately seven minutes after the explosion. The explosion happened around midnight which was when the Mississippi River was at flood stage. It was documented that the single metal lifeboat on board the Sultana was thrown from the upperdeck landing on several people swimming from the steamer resulting in further deaths.[16]

The disaster was believed to be the result of a repaired boiler explosion that led to the explosion of two of the three other boilers. The boiler had been previously found to have had a leak and was improperly repaired by boilermaker R.G. Taylor due to orders from Captain J. Cass Mason because of time constraints in Vicksburg, Mississippi. While chief engineer Nathan Wintringer approved the repaired boiler, Taylor stated that the boiler could not be considered safe since the boiler appeared to be burned from being worked on with too little water.[16] Traveling along the Mississippi River, the boiler exploded causing fire to spread throughout the steamer. The fire on board led to the collapse of both of the Sultana’s smokestacks, killing many passengers.[17] 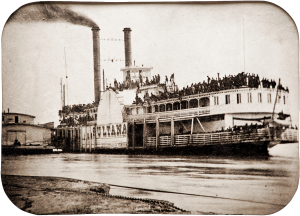 Photo:  Whole plate tintype, which appears to be a period enlargement made from a carte de visite of the Sultana taken at Helena, AR, on April 26, 1865, a day before she was destroyed. The view captures a large crowd of paroled Union prisoners packed tightly together on the steamboat’s decks.   The original image is credited to Thomas W. Bankes, Helena, AR