Shortcuts in engineering design can lead to engineering disasters. Engineering is the science and technology used to meet the needs and demands of society.[1] These demands include buildings, aircraft, vessels, and computer software. In order to meet society’s demands, the creation of newer technology and infrastructure must be met efficiently and cost-effectively. To accomplish this, managers and engineers have to have a mutual approach to the specified demand at hand. This can lead to shortcuts in engineering design to reduce costs of construction and fabrication. Occasionally, these shortcuts can lead to unexpected design failures.

In the field of engineering, the importance of safety is emphasized. Learning from past engineering failures and infamous disasters such as the Challenger explosion brings the sense of reality to what can happen when appropriate safety precautions are not taken. Safety tests such as tensile testing, finite element analysis (FEA), and failure theories help provide information to design engineers about what maximum forces and stresses can be applied to a certain region of a design. These precautionary measures help prevent failures due to overloading and deformation.[2]

Failure occurs when a structure or device has been used past the limits of design that inhibits proper function.[3] If a structure is designed to only support a certain amount of stress, strain, or loading and the user applies greater amounts, the structure will begin to deform and eventually fail. Several factors contribute to failure including a flawed design, improper use, financial costs, and miscommunication. 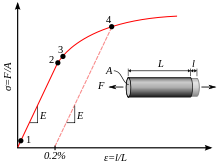 Stress–strain curve showing typical yield behavior for ductile metals. Stress (σ) is shown as a function of strain (ϵ). Stress and strain are correlated through Young’s Modulus: σ=Eϵ where E is the slope of the linear section of the plot.

Static loading is when a force is applied slowly to an object or structure. Static load tests such as tensile testing, bending tests, and torsion tests help determine the maximum loads that a design can withstand without permanent deformation or failure. Tensile testing is common when calculating a stress-strain curve which can determine the yield strength and ultimate strength of a specific test specimen.

The specimen is stretched slowly in tension until it breaks, while the load and the distance across the gage length are continuously monitored. A sample subjected to a tensile test can typically withstand stresses higher than its yield stress without breaking. At a certain point, however, the sample will break into two pieces. This happens because the microscopic cracks that resulted from yielding will spread to large scales. The stress at the point of complete breakage is called a material’s ultimate tensile strength.[4] The result is a stress-strain curve of the material’s behavior under static loading. Through this tensile testing, the yield strength is found at the point where the material begins to yield more readily to the applied stress, and its rate of deformation increases.[5]

Failure due to fatigue

When a material undergoes permanent deformation from exposure to radical temperatures or constant loading, the functionality of the material can become impaired.[6][7] This time–dependent plastic distortion of material is known as creep. Stress and temperature are both major factors of the rate of creep. In order for a design to be considered safe, the deformation due to creep must be much less than the strain at which failure occurs. Once the static loading causes the specimen to surpass this point the specimen will begin permanent, or plastic, deformation.[7]

Note that fatigue does not imply that the strength of the material is lessened after failure. This notion was originally referred to a material becoming “tired” after cyclic loading.[5]

Failure due to miscommunication

Engineering is a precise discipline and in order to be precise, communication among project developers is pertinent for a successful product. There are several forms of miscommunication that can lead to a flawed design in a system. There are various fields of engineering that have to intercommunicate when working toward a mutual goal. These fields include civil, electrical, mechanical, industrial, chemical, biological, and environmental engineering. When creating a modern automobile, electrical engineers, mechanical engineers, and environmental engineers are required to work together to produce a fuel-efficient, durable product for consumers. If engineers do not adequately communicate among one another, a potential design could have flaws and be unsafe for consumer purchase. Engineering disasters can be a result of such miscommunication. Such disasters include the 2005 levee failures in Greater New Orleans, Louisiana during Hurricane Katrina, the Space Shuttle Columbia disaster, and the Hyatt Regency walkway collapse.[9][10][11]

Failure due to software

Software has played a role in many high-profile disasters.

Engineering products and inventions are utilized everyday including computers, microwaves, and elevators. A broken microwave can have limited consequences; however, when larger projects such as infrastructures and airplanes fail, multiple people can be affected which leads to an engineering disaster. A disaster is defined as a calamity that results in significant damage which may include the loss of life.[12] Large-scale engineering disasters are recorded in the history books. Just like any other mistake, these disasters become reminders and guidelines of how to improve and not repeat the same mistakes. In-depth observations and post-disaster analysis have been documented to a large extent to help prevent similar disasters from occurri