Early Liberty ships suffered hull and deck cracks, and a few were lost to such structural defects. During World War II, there were nearly 1,500 instances of significant brittle fractures. Three of the 2,710 Liberties built broke in half without warning. In cold temperatures the steel hulls cracked, resulting in later ships being constructed using more suitable steel. 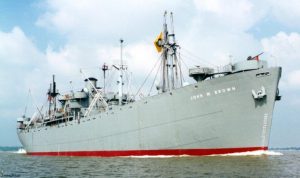 SS John W. Brown is one of only two surviving operational Liberty ships.