In this textbook you will be exposed to many terms and concepts associated with research methods, particularly as they relate to the research planning decisions you must make along the way. Figure 1.1 will help you contextualize many of these terms and understand the research process. This general chart begins with two key concepts: ontology and epistemology, advances through other concepts, and concludes with three research methodological approaches: qualitative, quantitative and mixed methods.

Research does not end with making decisions about the type of methods you will use; we could argue that the work is just beginning at this point. Figure 1.3 does not represent an all-encompassing list of concepts and terms related to research methods. Keep in mind that each strategy has its own data collection and analysis approaches associated with the various methodological approaches you choose. Figure 1.1 is intentioned to provide a general overview of the research concept. You may want to keep this figure handy as you read through the various chapters. 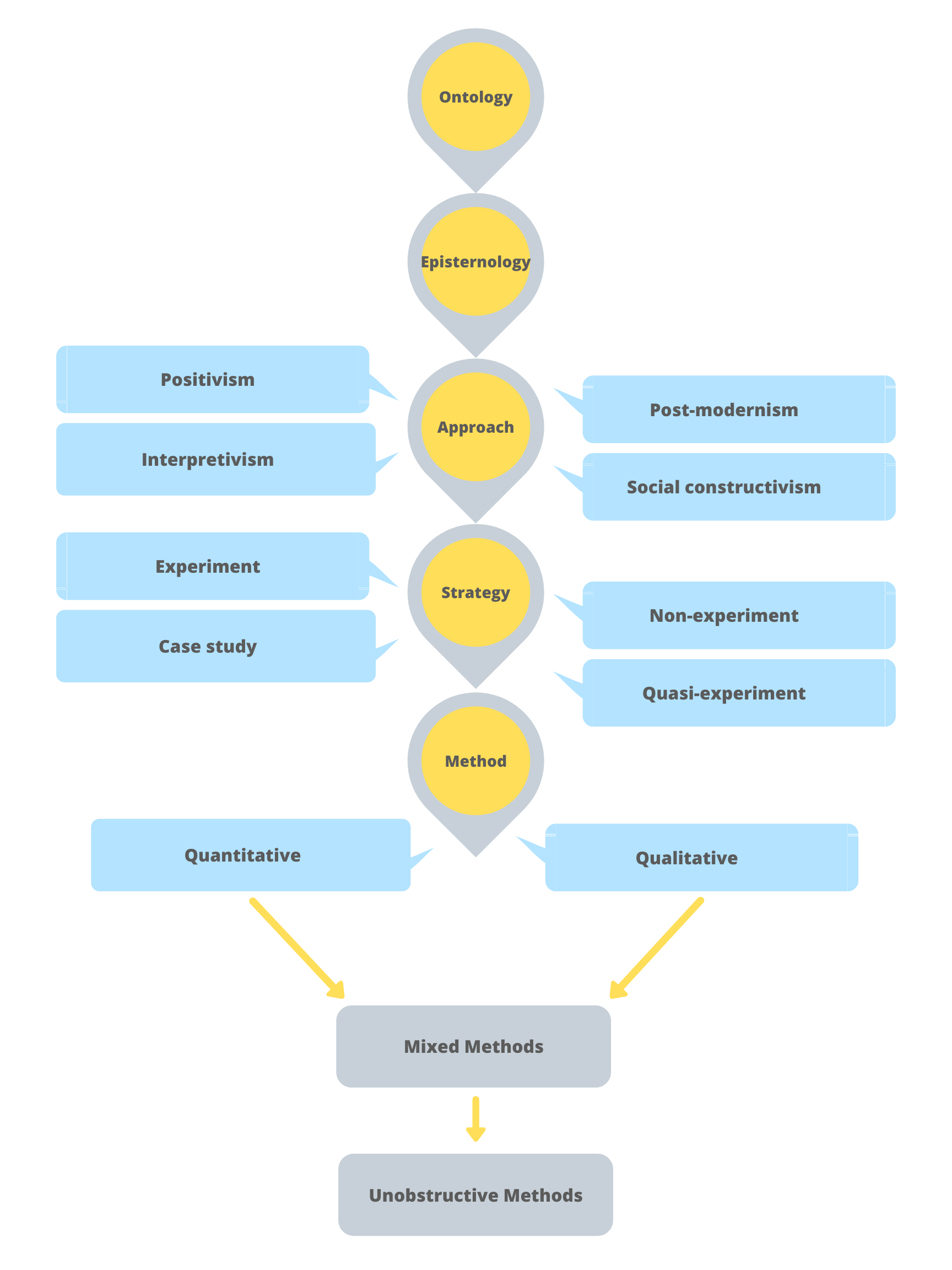 Thinking about what you know and how you know what you know involves questions of ontology and epistemology. Perhaps you have heard these concepts before in a philosophy class? These concepts are relevant to the work of sociologists as well. As sociologists (those who undertake socially-focused research), we want to understand some aspect of our social world. Usually, we are not starting with zero knowledge. In fact, we usually start with some understanding of three concepts: 1) what is; 2) what can be known about what is; and, 3) what the best mechanism happens to be for learning about what is (Saylor Academy, 2012). In the following sections, we will define these concepts and provide an example of the terms, ontology and epistemology.

Ontology is a Greek word that means the study, theory, or science of being. Ontology is concerned with the what is or the nature of reality (Saunders, Lewis, & Thornhill, 2009). It can involve some very large and difficult to answer questions, such as:

Ana is an Emergency & Security Management Studies (ESMS) student at a local college. She is just beginning her capstone research project and she plans to do research at the City of Vancouver. Her research question is: What is the role of City of Vancouver managers in the Emergency Management Department (EMD) in enabling positive community relationships? She will be collecting data related to the roles and duties of managers in enabling positive community relationships.

Robert is also an ESMS student at the same college. He, too, will be undertaking his research at the City of Vancouver. His research question is: What is the effect of the City of Vancouver’s corporate culture in enabling EMD managers to develop a positive relationship with the local community? He will be collecting data related to perceptions of corporate culture and its effect on enabling positive community-emergency management department relationships.

Before the students begin collecting data, they learn that six months ago, the long-time emergency department manager and assistance manager both retired. They have been replaced by two senior staff managers who have Bachelor’s degrees in Emergency Services Management. These new managers are considered more up-to-date and knowledgeable on emergency services management, given their specialized academic training and practical on-the-job work experience in this department. The new managers have essentially the same job duties and operate under the same procedures as the managers they replaced. When Ana and Robert approach the managers to ask them to participate in their separate studies, the new managers state that they are just new on the job and probably cannot answer the research questions; they decline to participate. Ana and Robert are worried that they will need to start all over again with a new research project. They return to their supervisors to get their opinions on what they should do.

Before reading about their supervisors’ responses, answer the following questions:

Ana’s supervisor tells her that her research question is set up for an objectivist approach. Her supervisor tells her that in her study the social entity (the City) exists in reality external to the social actors (the managers), i.e., there is a formal management structure at the City that has largely remained unchanged since the old managers left and the new ones started. The procedures remain the same regardless of whoever occupies those positions. As such, Ana, using an objectivist approach, could state that the new managers have job descriptions which describe their duties and that they are a part of a formal structure with a hierarchy of people reporting to them and to whom they report. She could further state that this hierarchy, which is unique to this organization, also resembles hierarchies found in other similar organizations. As such, she can argue that the new managers will be able to speak about the role they play in enabling positive community relationships. Their answers would likely be no different than those of the old managers, because the management structure and the procedures remain the same. Therefore, she could go back to the new managers and ask them to participate in her research study.

As you can see the research question of each study guides the decision as to whether the researcher should take a subjective or an objective ontological approach. This decision, in turn, guides their approach to the research study, including whom they should interview.

Epistemology has to do with knowledge. Rather than dealing with questions about what is, epistemology deals with questions of how we know what is.  In sociology, there are many ways to uncover knowledge. We might interview people to understand public opinion about a topic, or perhaps observe them in their natural environment. We could avoid face-to-face interaction altogether by mailing people surveys to complete on their own or by reading people’s opinions in newspaper editorials. Each method of data collection comes with its own set of epistemological assumptions about how to find things out (Saylor Academy, 2012). There are two main subsections of epistemology: positivist and interpretivist philosophies. We will examine these philosophies or paradigms in the following sections.