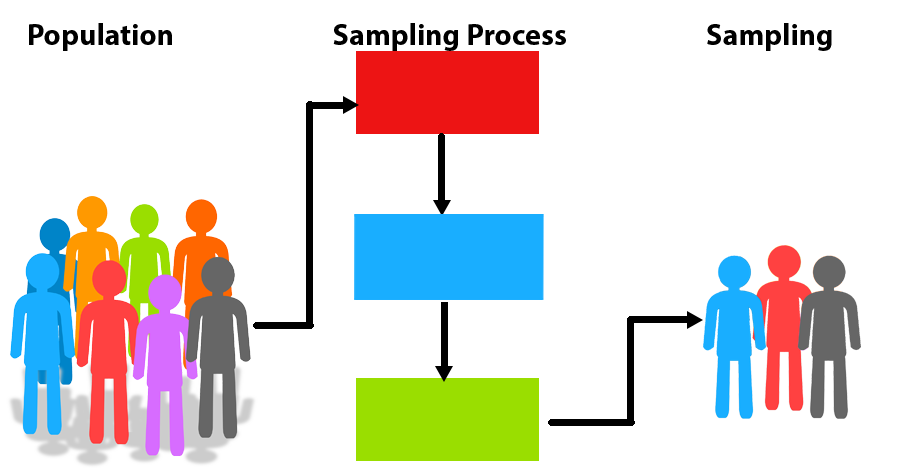 If you had all the money and resources in the world, you could potentially sample the whole population. However, money and resources usually limit sampling, and furthermore all members of a population may not actually be identifiable in a way that allows you to sample. As a result, researchers take a sample, or a subgroup of people (or objects) from the population and study that instead of the population. In social scientific research, the population is the cluster of people, events, things, or other phenomena in which you are most interested. It is often the “who” or “what” that you want to be able to say something about at the end of your study. Populations in research may be rather large, such as “the Canadian people,” but typically they are more focused than that. For example, a large study, for which the population of interest really is the Canadian people, will likely specify which Canadian people, such as adults over the age of 18 or citizens or legal residents.

One of the most surprising and often frustrating lessons students of research methods learn is that there is a difference between one’s population of interest and one’s study sample. While there are certainly exceptions, more often than not, a researcher’s population and the sample are not the same. A sample is the cluster of people or events, for example, from or about which you will actually gather data. Some sampling strategies allow researchers to make claims about populations that are much larger than their actual sample with a fair amount of confidence. Other sampling strategies are designed to allow researchers to make theoretical contributions rather than to make sweeping claims about large populations. We will discuss both types of strategies later in this chapter.

As mentioned previously, it is quite rare for a researcher to gather data from their entire population of interest. This might sound surprising or disappointing until you think about the kinds of research questions that sociologists typically ask. For example, suppose we wish to answer the following research question: “How do men’s and women’s college experiences differ, and how are they similar?” Would you expect to be able to collect data from all college students across all nations from all historical time periods? Unless you plan to make answering this research question your entire life’s work (and then some), the answer is probably “no.” So then, what is a researcher to do? Does not having the time or resources to gather data from every single person of interest mean having to give up your research interest? Absolutely not. It just means having to make some hard choices about sampling, and then being honest with yourself and your readers about the limitations of your study based on the sample from whom you were able to actually collect data. Click on this link to help you better understand how to get from the theoretical population (to whom you want to generalize) to your sample (who will actually be in your study) https://www.socialresearchmethods.net/kb/sampterm.php

To summarize, we use sampling when the population is large and we simply do not have the time, financial support, and/or ability (i.e. lack of laboratory equipment) to reach the entire population.

In the following table you will find some examples of a population versus a sample, and the type of research methodology that might lead such a study. Do not worry about the methodology column now, as you have most likely not yet read the applicable chapters. Make a note to yourself and return to this table after reading Chapters 8 through 13.