When Hurricane Katrina hit the United States on August 28, 2005, the Gulf Coast was devastated; the 2011 tsunami affected the entire Pacific Rim, and the Gorkha earthquake that hit Nepal in April 25, 2015 left 3.5 million homeless.  With natural disasters like the three examples above, people are stranded for days, some without food, water, or shelter due to overwhelming flooding and destruction.  During the horrible days and in the aftermath, those who were affected by any of these catastrophes do not care what kind of car they drove, what anyone did for a living, or if they forgot to sign up for French or scuba lessons. They were focused on the basics: food, shelter, and clothing. Tragedies like these are a demonstration of exactly how Maslow’s hierarchy of needs works. Abraham Maslow is among the most renowned psychologists of the twentieth century. His theory explains human behavior in simple terms: a hierarchy of needs that begins with the most basic of physiological needs(e.g., food, water, warmth, rest) motivates people, and when the lowest-level needs are satisfied, they are no longer motivators (Mcleod, 2020).  During the days after Hurricane Katrina hit, people were rescued and provided with water, food, and shelter. Many were relocated to temporary housing or even to housing outside the affected areas. It was not until after thephysiological needs were met that people became concerned about the next level of needs on Maslow’s hierarchy: safety needs. Looting of shops in some of the cities began to occur, and there was even concern that the police force in some cities was not taking an active role in arresting those who were breaking the law (Associated Press, 2005).  The people of the Gulf Coast were no longer motivated by simply getting water, food, or shelter; they had moved up Maslow’s hierarchy and were concerned about their personal security and well-being. 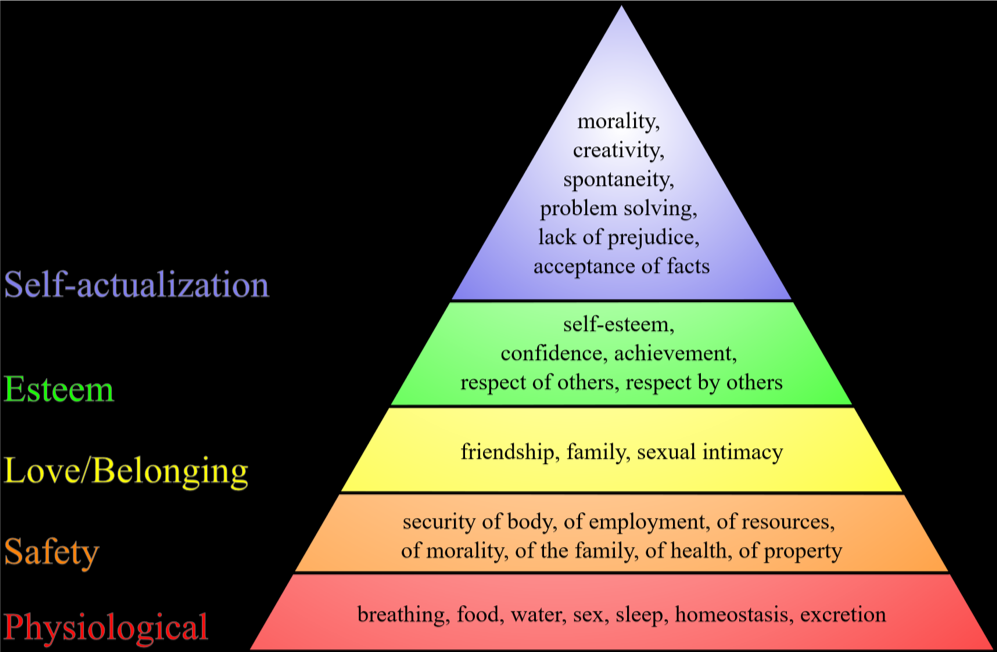 As the days and weeks passed after Hurricane Katrina hit, its victims wanted to get back to their normal lives. They searched for options to put their children back in school, ways to get jobs, and options to rebuild their lives. At this point, people were motivated by social needs such as belongingness and love (Mcleod, 2020).  Slowly but surely, people began to rebuild their lives and their cities. People took on leadership roles and began to take recovery to the next level. Even people who were hundreds of miles away from the hurricane-ravaged area in New Orleans or the earthquake in Nepal or the Tsunami in Japan wanted to help. This is an example of esteem needs, or the need to feel respected and appreciated by one’s peers. Although volunteers were motivated by social needs and the need to help their fellow human beings, they found that they were also greatly appreciated for their efforts.

This all comes together at the point of sale, whether you are selling in business-to-consumer (B2C) or business-to-business (B2B) environments. When you understand the motivation of your customer, you can customize your solution and your message to meet their needs, emotions, and motivations. Consider the Hurricane Katrina example; would you attempt to sell fine jewelry, pitch the benefits of a landscaping service, or suggest a home theater system to someone in New Orleans on August 29, 2005? Probably not. People were focused on their most basic needs at that time, and none of these products or services would have been appropriate to sell. Although this may seem like an extreme example, it is a good way to remember to look at the world through your customer’s eyes, as you will see a completely different view.

Now that you can see what motivates people to buy, it is time to learn who is buying. Although the buying process is similar for B2C and B2B, there are some distinct differences that can make a difference in the way you sell.

The Power of Selling by Dr. Michelle Clement is licensed under a Creative Commons Attribution-NonCommercial-ShareAlike 4.0 International License, except where otherwise noted.