In the past, anthropologists rarely respected the intellectual property rights of the Indigenous people about whom they were conducting research, although this has changed as the discipline of anthropology has grown and evolved. Policies on intellectual property rights and traditional knowledge have recently been developed to help researchers who wish to better understand the protocols and best practices for working with Indigenous peoples in Yukon. 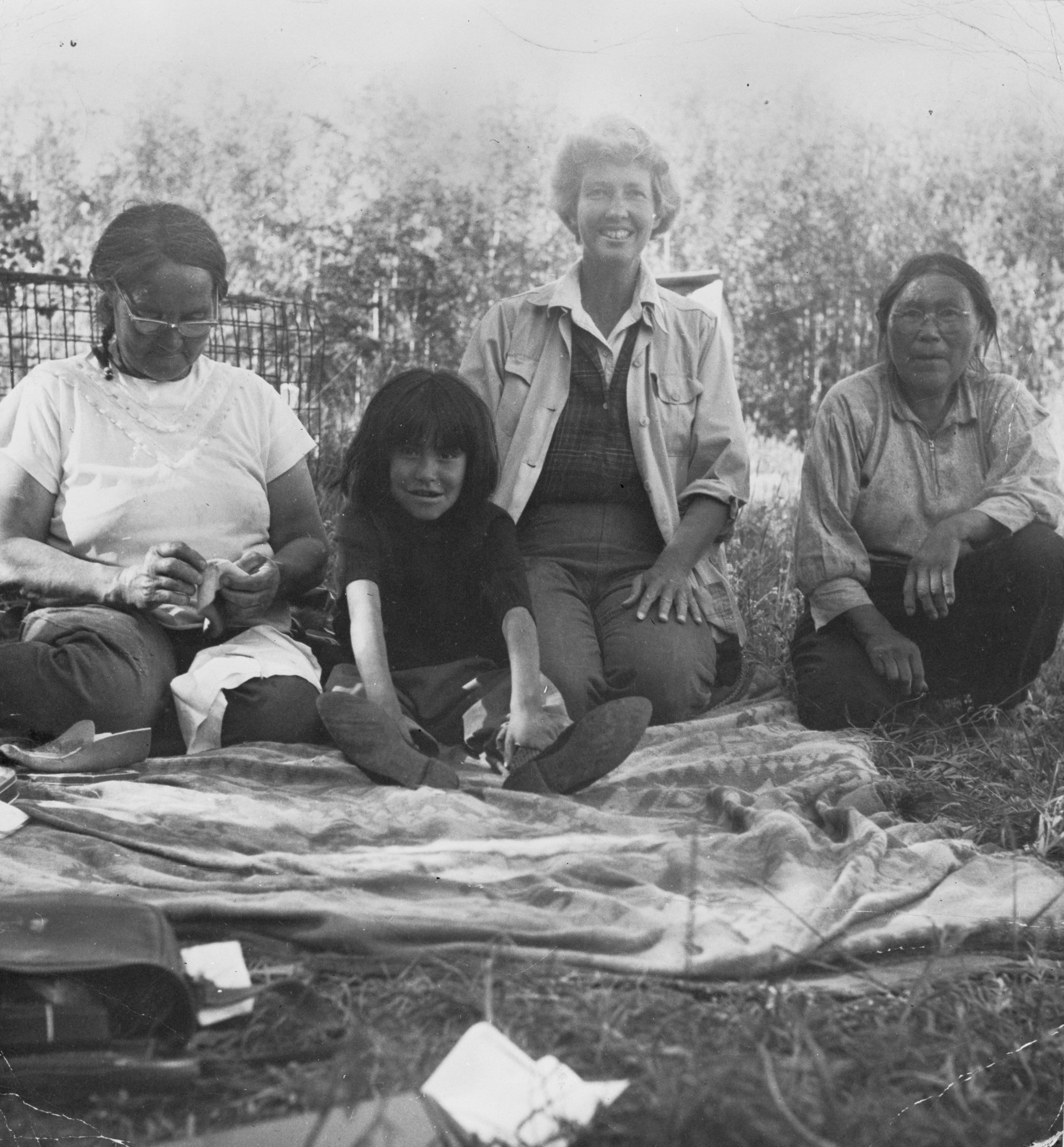 Catharine (Kitty) McClellan first came to Yukon as a young graduate student in the summer of 1948, with funding from the National Museums of Canada to conduct ethnographic fieldwork in the southern Yukon for her doctoral research. In an obituary she wrote about Catharine, Julie Cruikshank, another anthropologist who worked in Yukon after Catharine (and who will be discussed later in this chapter), commented that Catharine “was taken aback when the museum informed her that a woman researcher could not possibly go to the Yukon ‘alone’ and advised her to attach herself to a male scientific party. Unfazed, she and a fellow student, Dorothy Rainier Libby, persuaded the museum to give them a small stipend to proceed together” (2010:348). Catharine soon became a model for other ethnographers generally, and, specifically, for other academic women. She continued to work in Yukon until the mid-1980s and returned every summer, as well as the occasional winter, to conduct her research.

Today, some of Catharine’s best-known publications include her aforementioned ethnographic volumes My Old People Say: An Ethnographic Survey of Southern Yukon Territory (1975) and Part of the Land, Part of the Water: A History of the Yukon Indians (1987). While these volumes provide information on lifeways, subsistence patterns, social organization, technologies, and history, she was also highly interested in the stories and oral traditions of Yukon’s Indigenous people. Through the course of her fieldwork in Yukon, she recorded numerous stories, myths, and oral histories. One of her monographs, The Girl Who Married the Bear (1970), “compared 11 different versions of a single story and discussed the enormous power it seemed to have for both narrators and listeners and both men and women” (Cruikshank 2010:349). Julie Cruikshank edited one of Catharine’s last publications prior to her death: the volumes My Old People’s Stories: A Legacy for Yukon First Nations were published in 2007 by the Yukon Heritage Branch and are meant to be companions to her earlier ethnographic work.

Catharine’s fieldwork began before collaborative or applied research had developed in the field of anthropology (collaborative anthropology means working together with the community, while applied anthropology refers to the application of anthropological data, perspectives, theory, and methods to identify, assess, and solve social problems.) As Julie Cruikshank writes, “McClellan never defined her work as applied anthropology, and she could scarcely have imagined the policy implications it would have years later” (2010:349). Examples of those policy implications include the fact that Catharine was called as an expert witness during the Mackenzie Valley Pipeline Inquiry in 1976, and her detailed ethnographic work was used as background material during the land claims processes (Cruikshank 2010). And, although collaborative research was not yet the standard practice, Catharine did engage in collaboration with First Nations in Yukon throughout her long research career. The level of detail she obtained in her works, as well as her annual returns to the North, show that she was an anthropologist who did more than “collect” information and then return south never to be seen again.

Catharine was a role model for current anthropologists who want to have mutually reciprocal relationships with the communities where they work. She was also supportive of Yukon Indigenous people becoming anthropologists. In the Author’s Note in her 2001 edition of My Old People Say she wrote, “It is with the deepest pleasure that I now see younger First Nations individuals becoming anthropologists themselves, or in other ways preserving their old peoples’ unforgettable legacy” (McClellan 2001:xxiii).

Although we cannot know what Catharine’s favourite thing was about Yukon, we do know that she was very grateful for the warm hospitality that many individuals, both Indigenous and non-Indigenous, offered her throughout her research in Yukon. In the acknowledgments to My Old People Say (1975) she wrote, “To all my native friends in southern Yukon Territory I give my deepest thanks for the warmth with which they received me and the thoughtful ways in which they answered my countless questions” (McClellan 1975:xxv).

We, on behalf of the other anthropologists who have worked in Yukon, also offer our deepest thanks to Catharine McClellan for being the wonderful role model that she was and for sharing her knowledge through her many publications.

For instance, many Indigenous communities now insist that researchers follow Ownership, Control, Access and Possession (OCAP), a set of standards created by the National Aboriginal Health Organization which shut down in 2012. It was then taken over by the First Nations Information Governance Centre. The organization “asserts that First Nations have control over data collection processes in their communities and that they own and control how this information can be used” (First Nations Information Governance Centre 2017).As well, the document entitled “Protocols and Principles for Conducting Research with Yukon First Nations,” created by Yukon University, states that, “This protocol has been developed to help ensure that, in all research conducted with Yukon First Nations peoples, appropriate respect is given to their cultures, languages, knowledge, and values, and to the standards used by them to legitimate knowledge” (Yukon Research Centre 2013:3). The First Nation of Na-Cho Nyak Dun’s Traditional Knowledge Policy also emphasizes that researchers should contact the Indigenous community as their “primary point of contact” (First Nation of Na-Cho Nyak Dun 2008:8). In Yukon, collaboration has been key for many years and for new researchers it is the standard.