The gold rush of 1898 has been described in countless books, newspapers, and magazines inside and outside of Yukon (Figure 4.4). But, for the most part, Indigenous peoples were ignored in early accounts of the Klondike gold rush, even though their participation was integral to the survival of thousands of gold seekers. Big-city news reports and miners’ journals typically focused on the newcomers and their adventures in the North. This is ironic since a Tagish family was central to the discovery of Klondike gold.

Prior to the 1898 rush, gold had been found within Yukon by Indigenous people, explorers, fur traders, and missionaries. For instance, Robert Campbell describes seeing gold near Fort Selkirk in his journals (Wilson 1970). Missionary Robert McDonald indicates that gold was present in Birch Creek (near the Yukon-Alaska border) in the 1870s (Cruikshank 1991:122). As well, geologist George Dawson identified gold deposits in the 1880s (Cruikshank 1991:122). Campbell and McDonald were not eager to report their findings because they feared newcomers would come to Yukon and tamper with fur-bearing animals or influence Indigenous peoples in a negative way.[1] It was not until the late 1880s that gold seekers began to report finding gold in large quantities in Yukon; this was associated with rushes that had already occurred in California and British Columbia (Brands 2003; Forsyth and Dickson 2007).

The story of how Keish and his group discovered gold varies with the teller. The often-exaggerated non-Indigenous version romanticizes Skookum Jim and describes him as an Indigenous man who “longed to be a white man—in other words, a prospector” (Berton 1958:44). In this telling, Keish and his family and friends purposely headed to the Klondike to search for gold, and they discovered it after George Carmack was informed of a good location to search by another non-Indigenous gold seeker.

In Tagish oral history accounts, the purpose of Keish’s trip downriver was not to look for gold but rather centred on a family obligation: he was looking for his two sisters, Aage and Kate, who had left home with their non-Indigenous gold-prospecting husbands. Keish and his family came across gold by chance; it was not the focus of their trip (Cruikshank 1990:124–133).

After striking it rich, the group headed to Seattle with their newfound wealth and spent their earnings with abandon. Eventually they lost all their money and parted ways. Keish’s discovery and carefree spending in Seattle led to a mass influx of gold seekers to the Klondike gold fields (Berton 1958:106; Spude 2011:15). News of the gold strike was printed in countless newspapers throughout North America, and the world, and many people decided to attempt the long journey to the Klondike gold fields in hopes of making a fortune (Berton 1958:112). While 100,000 people attempted the dangerous trip inland from the Alaska coast, approximately 30,000 people, mostly Americans, actually made it to the gold fields. 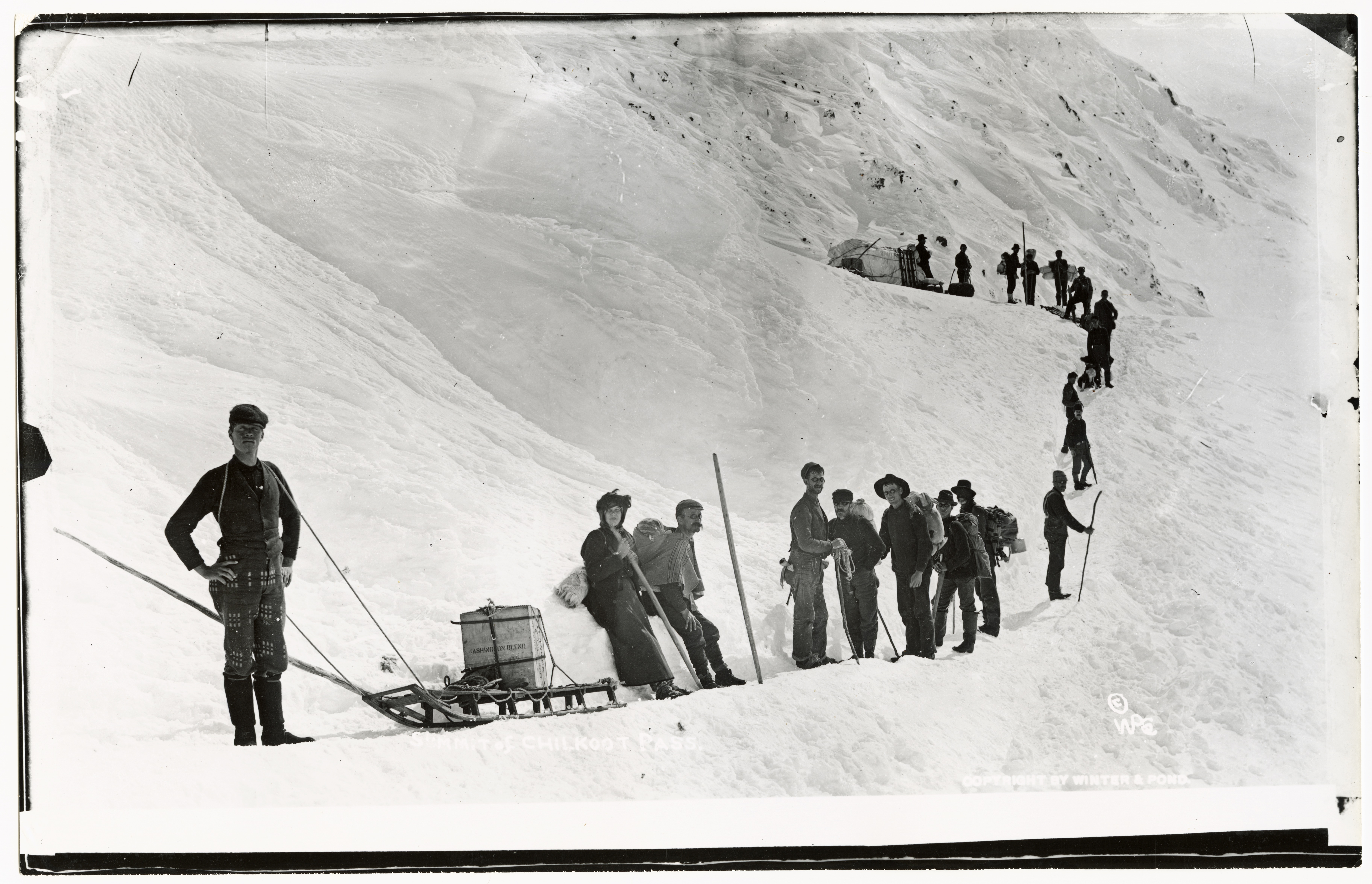 Indigenous people participated in the various gold rushes that occurred in Yukon. They typically worked as packers, helping carry goods along the Chilkoot or White Pass trails from the coast inland. Mrs. Angela Sidney describes the work of packing:

They go back, pack stuff [for prospectors].
They’re freighting over the summit toward Bennett.
They get paid for packing stuff: flour, soap, everything like that…
[Sidney in Cruikshank 1990:58].

Indigenous people also worked as woodcutters and loaders on steamboats, and as hunters providing meat and fish to miners and their pack dogs (see Dick Nukon, Porcupine-Peel, January 20, 1995, 1995:93-95, English and Gwich’in in Vuntut Gwitchin First Nation and Smith 2009:256-257; Coates 1991:45). As Bishop Bompas noted when describing Tr’ondëk Hwëch’in people’s mixed economy during the Klondike Gold Rush, “…The Indians now place such high prices on meat or fuel, or other things which they supply to the whites…” (Bompas in Cody 1908:271).

Early on, Indigenous people also worked as labourers at the mines, but as time went on and more newcomers arrived, those non-Indigenous miners who could not stake a claim ended up working for other miners and took away the labour jobs that once belonged to local people. An Indigenous person might continue to trade furs seasonally at various Yukon fur-trade posts and also incorporate some mining work into their economic pursuits. As well, some Indigenous people chose to stay away from mining altogether. Those that did participate were able to work in a mixed economy, which now included trading and money exchange. This allowed them to purchase goods that might have been unavailable to them before the gold rush (Coates 1991:34–35).