Community food security is another important concept that is even more applicable to Canadians and those of us who live in agricultural and horticultural regions like the Okanagan. The preceding 4″ video on Community Food Security articulates the key points of what a person describes as food security. Presented in the following text are the tenets of community food security extracted from my doctoral research which takes into consideration much more than simply what is included in the United Nations Declaration on Food Security. Please pay attention to what some of these additional considerations are, compared to the simple definition of food security the UNFAO provides.

Although the B.C. government temporarily opted out of measuring food insecurity in 2013 and 2014 (Tarasuk et al. 2015:8), statistics from other participating provinces indicate high rates of persistent food insecurity (Tarasuk et al. 2015, 2016). What is clear is that up-to-date, evidence-based statistics are imperative if efforts to mitigate food insecurity are to be taken seriously by the provincial governments. At the community level, Wakefield et al. (2012:1411) conducted a full examination of community food assistance in the Toronto and Hamilton areas and found 31 community agencies that address community food security indicating the inadequate mandates or declarations at the federal level that addresses food security.

Agencies at regional and municipal levels have stepped forward to fill the policy vacuum, due to the lack of a single federal ministry’s comprehensive food security policy, such as Toronto Public Health (TPH). TPH states that food security is still the most common term used among those who work to meet the needs of individuals, households, and communities. However, they also insist that the definition should go beyond food quantity and quality to include the four “A’s” as proposed by Mustafa Koc (2013). These “A’s” are: availability, which emphasizes having sufficient food for all people at all times; accessibility, which means having physical and economic access to food at all times; acceptability, which stresses access to culturally and symbolically acceptable foods, produced in ways that do not compromise dignity, cultural traditions, or self-respect of human rights; and adequacy, which is defined by having access to food that is nutritious and safe, including being produced in environmentally sustainable ways. A sustainable food system is defined as one that meets basic human needs, without compromising future generations’ ability to meet those needs (Toronto Public Health 2006). Another way to frame these four concepts, – plus universality – is looking at the five basic and essential questions provided by Toronto Public Health (2006) in Table 4.2.

By addressing the above questions in Table 4.3 (Taylor 2016), food security acts as a canopy term that advocates for equity in all aspects of food security. As the table indicates, all people should be able to access food in a dignified manner at all times for a healthy, active life. It also stresses that food should be safe and nutritious and produced in an environmentally sustainable way that promotes healthy communities.

Of course, the context in which these questions are answered can be quite complex and inextricably intertwined and may rely upon specific geographic factors and conceptual starting points. For example, a global food security framework would analyze the ability of national and international global food producers and systems to meet the Earth’s seven billion inhabitants’ dietary needs. This analysis needs to also take into consideration threats to the sustainability of food provisionings such as genetic modification, corporate dominance, and threats to bio-diversity, topics addressed in the next section (Toronto Public Health 2006). 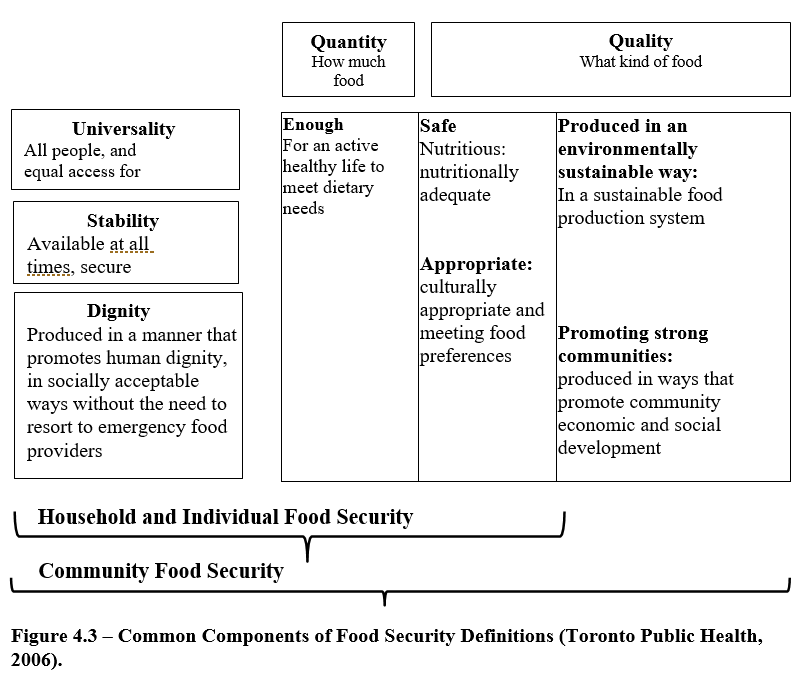 Figure 4.3 shows how the concept of food security evolved to answer five specific questions. The above table explains that if all people have equal access at all times, through a dignified manner, in socially acceptable ways, and without the need to resort to emergency food provisioning centers, then the quantity and quality of nutritious food based on nutritionally adequate food – reached in a safe, nutritious, and culturally appropriate way – food security can be achieved for an active and healthy lifestyle. In this way, food security can contribute to economically secure and socially well-developed communities.

In the 1980s, analyses of food security began to include the concept of stability of “assured food” access as an essential component. Essentially, this concept mirrored the idea of food security as a fundamental ‘right’ stemming from the 1974 Rome FAO World Food Conference’s Declaration on the Eradication of Hunger and Malnutrition (Koc 2013). As a consequence, for the last two decades households and individuals were analyzed primarily within the context of experiences of hunger, and to a lesser degree, how experiences of the quantity and quality of diets were perceived to be compromised. This analysis has ultimately led to the identification of the numbers of food insecure individuals or vulnerability to food insecurity (Toronto Public Health 2006).

In the early 1990s, much research was conducted with low-income women in upstate New York by Radimer et al. (1992), who stated that experiences of household food insecurity might have four aspects:

These four dimensions of household food insecurity and the five conceptual components of food security are interconnected. However, the authors of the Toronto Public Health report have identified gaps in these definitions. First, the existence of food-insecure households shows that universal food access is absent. Second, psychological aspects of food insecurity stem from unstable access and the inability of households to have sustained (stable) access to food due to resource (money) constraints, which means adults may experience anxiety. Third, accessing food in ways that respect human dignity is sometimes impossible for food-insecure households who must depend on socially unacceptable ways to meet their dietary needs. Figure 4.2 (Taylor 2016) indicates the flow of experiences and decisions that may take place as resources decrease. Anxiety typically occurs first, which is then followed by compromises in the quality and quantity of food intakes, where quality typically comes at the expense of quantity. 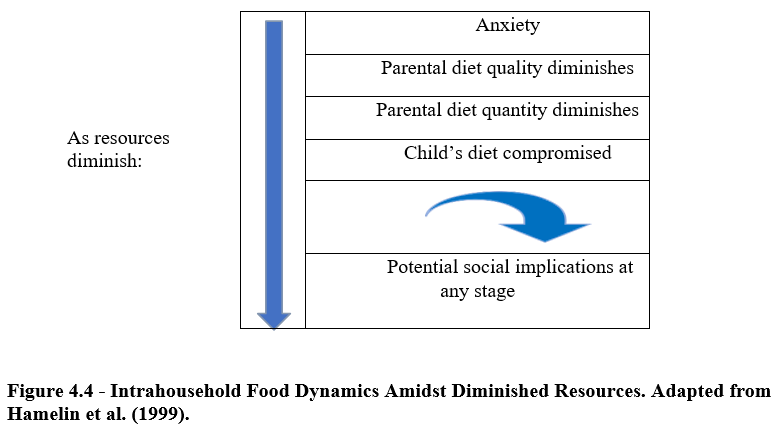 In Canada, the Ontario Public Health Association (2002) has taken a keen interest in community food security. In its 2002 paper, “A Systemic Approach to Community Food Security: A Role for Public Health,” a broad definition of terms is based on the Ottawa Charter for Health Promotion which says that the importance and definition of ‘social determinants of health” is:

Community food security is a strategy for ensuring secure access to adequate amounts of safe, nutritious, culturally appropriate food for everyone, produced in an environmentally sustainable way, and provided in a manner that promotes human dignity (2).

Table 4.3 intends to indicate the synchronicity of the various theories that are included in the Ottawa Charter for Health Promotion’s definition of food security.

In 2013, the UNFAO Committee on World Food Security proposed the most current definition of food security to include the importance of nutrition. Food and nutrition security exists:

when all people at all times have physical, social, and economic access to food, which is safe and consumed in sufficient quantity and quality to meet their dietary needs and food preferences and is supported by an environment of adequate sanitation, health services, and care, allowing for a healthy and active life (UNFAO 2013:50).

In this case, the notion of health is included by the UNFAO in 2013 and resonates with the Ottawa Charter for Health at a time when the state of the western world’s health is in sharp decline. This topic echoes with Khoury et al. (2014) and the WHO report (2014). These definitions combined create what I believe to be a concise definition for creating Canadian food security.

Although the concept of Community Food Security is included in the Toronto Public Health Report (2006), the concept interestingly shares more aspects with Food Sovereignty. It indicates a shift in focus by public health authorities to a community level. Within the community-level focus, the goals of physical and economic access to food remain but also includes and acknowledges the importance of economic, environmental, and social aspects of the system (Toronto Public Health 2006). These goals have partly arisen because a focus on food insecurity can no longer solely focus on the individual and household level. It must also include a more socio-holistic approach if food security goals are to be realized. Food system sustainability, issues of social justice, self-reliance, community economic development, and an inclusionary, collaborative, and cooperative model between all players in regional and local food systems are some of these social aspects (Toronto Public Health 2006). Based on the Ottawa Charter for Public Health principles, Toronto Public Health (2006) provides the most comprehensive definition of Community Food Security. This definition has identified the critical importance of the “social determinants” of health.

Ontario Public Health Association’s (2002) definition also includes and addresses several other points such as issues of adequate income for consumers and growers, local food production, environmental sustainability, fish and wildlife habitat protection, and access to nutritional, food-based community economic development, and social cohesion. Many health authorities nation-wide have adopted community food security as a response to the rise in food banks and obesity along with the increase in diabetes rates while environmental concerns were also being tabled for discussion; bio-diversity preservation, the health ramifications of chemical pollutants, and the impact of genetically modified foods on the environment (Toronto Public Health 2006).

What passes as food security policy in Canada is a collection of many disjointed pieces of policy, regulations, programs at various levels of government. Even a cursory review of policy literature reveals that the technocratic, mechanistic, fragmentary, and contradictory view of food substantiates this hypothesis. Furthermore, Martin and Clapp (2015) explain that the financialization of the agricultural regime is firmly placed within the paradigm of neo-liberal and capitalist relations, which support industrialized agriculture. A food policy that prioritizes agriculture production systems that ensures and delivers the highest quality of nutritious food, in the most efficient and environmentally sustainable way and that addresses governance and reconciliation is yet to be developed. If the Canadian government legislated a food security policy according to the definitions of La Vía Campesina (1996b) and the IAAKSTD (2009) then indeed, the definitions of community food security would exist as precursors to attaining food security in Canada.