The ilium is the largest and the most superior of the three bones that form the coxa (hipbone or hip joint). The largest region of the ilium is the ala, an area that resembles the shape of an elephant’s ear, has a large flat surface that is slightly concave when viewed from an anterior direction. Along the superior edge of the ala is a widened bony ridge known as the iliac crest. The iliac crest protrudes laterally towards the body’s surface it is the palpable ridge of the hip and acts as an important muscle attachment site. At the end of the iliac crest, the ilium narrows toward its center to form the anterior superior iliac spine (A.S.I.S.) and the posterior superior iliac spine(P.S.I.S.) of the ilium. It then turns again just inferior to these spines to form the anterior inferior iliac spine (A.I.I.S.) and the posterior inferior iliac spine (P.I.I.S.).

Inferior to the ala, the ilium widens to form the body. Between the ala and the body is the greater sciatic notch, a large V-shaped notch in the posterior ilium that allows the sciatic nerve to pass through the pelvis in order to innervate the lower limb.

The ischium is the posterior inferior portion of the pelvis. Posteriorly, bony prominences form the ischial tuberosity or each side of the inner pelvis and support the weight of the body in a sitting position. The ischial ramus is a the thin, flattened part of the coxal bone, which ascends from the lower part of the body and joins the inferior ramus of the pubis joint, indicated in adults by a raised line. The combined rami are sometimes called the ischiopubic ramus.  The obturator foramen a large opening created by both rami of the ischium and the pubis. This opening allows for the passage of major blood vessels and nerves to the legs and feet.

Together, the ilium, ischium and pubis and form the acetabulum, a cup-like structure that forms the socket of the hip joint and articulates with the head of the femur. The articular surface of the acetabulum is 5cm and has a smooth moon-like appearance named the lunate surface. 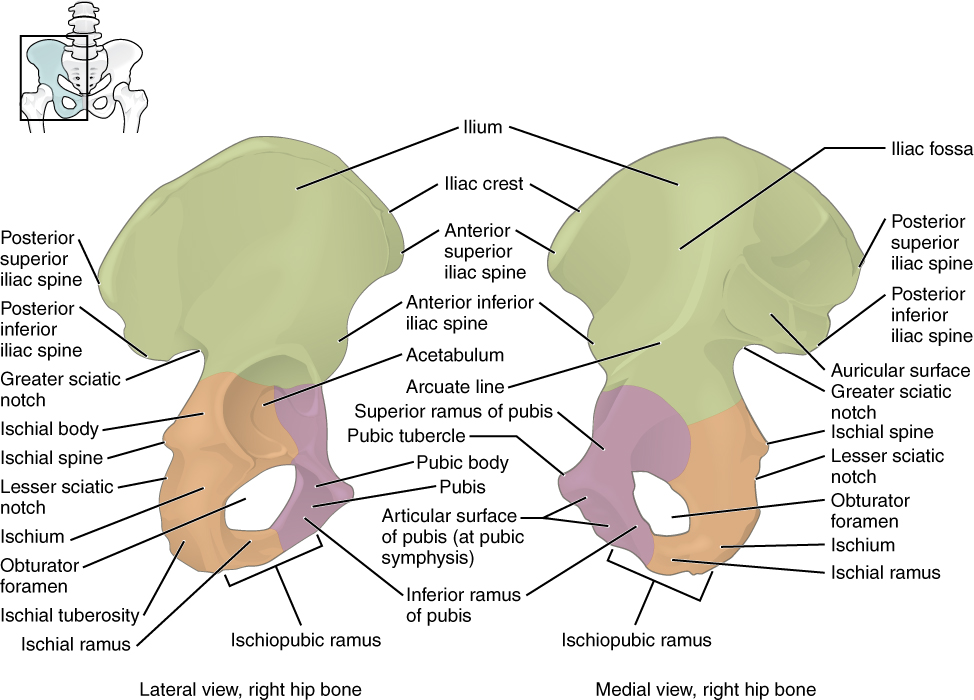 Figure 1. Diagram demonstrating the coxal bone’s three regions. These regions are made up of individuals bones that were fused together over the first 20 years of human life. The ilium forms the large, fan-shaped superior portion, the ischium forms the posterioinferior portion and the pubis forms the anteromedial portion.

The sacrum (SAY-crum) forms the posterior aspect of the pelvis. It is a triangular shaped bone comprised of five sacral vertebrae (S1-S5), which begins to fuse during adolescence and finishes fusing by early adulthood. It contains four pairs of anterior and posterior foramen, which decrease in size inferiorly. The sacrum transmits the weight of the body and helps stabilize the pelvis. The sacrum articulates on its superior aspect (the base of the sacrum) with the lumbar vertebrae (L5) at the lumbosacral joint; on its lateral aspects with the iliac bones at the sacroiliac joint; and on its posterior aspect (the apex of the sacrum) with the coccyx at the sacrococcygeal joint.

The coccyx (cocs-ICKS), or tailbone, is the most inferior portion of the human vertebral column. It is comprised of two to four fused bones (Co1-Co4) and is the remnant of a vestigial tail. The base of the coccyx has a pair of transverse processes and cornua and articulates with the sacrum at the sacrococcygeal joint.

Figure 2. Diagram summarizing the anterior (left) and posterior (right) of the sacrum and coccyx bony features and landmarks.

The pelvis can be divided into the true pelvis (lesser pelvis) and the false pelvis (greater pelvis).  The true pelvis borders extend from either side of the sacrum base, along with the arcuate line, pectineal line into the pubic symphysis. The bony features of the true pelvis include a boney ridge, pelvic brim and the enclosed space is the pelvic inlet. On the other hand, the false pelvis is the upper part of the pelvis and its borders include portions of the superior ilium to the pelvic brim.

Comparison of Male and Female Pelvis

The differences between the male and female structure of the pelvis are related to human function and body size. In general, the bones of a male pelvis are thicker and heavier, which is an adaptation to help support the more muscular and physical build of males. In comparison, the main differences in the shape of male and females are due to physiological adaptation of childbirth. The female pelvis is larger and broader and generally smoother compared to the males that have a rougher, larger oval inlet in shape. The sides of the male’s pelvis converge from the inlet to the outlet, whereas the sides of the female pelvis are wider apart. The angle between the inferior pubic rami is acute (roughly 70 degrees) in men, but obtuse (90-100 degrees) in women. The males sacrum is longer, narrower, straighter and has a pronounced sacral promontory. The female sacrum is shorter, wider, curved more posteriorly and has a less pronounced sacral promontory. The acetabula are wider apart in females compared to males which is more narrow. The acetabulum faces more laterally in males and more anteriorly in females. Consequently, the leg can move forward and backward in a single plane when males walk. In females, the leg must swing forward and inward, from where the pivoting head of the femur moves the leg back in another plane. The change in angle of the femoral head gives the female gait its characteristic of swinging hips.

Figure 3. Diagram summarizing the differences between the male and female pelvis. The red outlined circle outlines the structural shape of the pubic outlet and inlet in comparison of female to male.