The middle division of the mediastinum consists soley of the heart. The human heart is approximantly the size of a closed fist and is the body’s circulatory pump. The heart contains four cavities: two atriums (right and left) and two ventricles (right and left).

The pericardium is a fluid filled cavity called the pericardial cavity that the heart sits in. It is a type of serous membrane that is responsible for the production of serous fluid used to lubricate the heart and prevent friction The pericardium holds the heart in position and maintains hollow space around the heart for the expansion of the heart during the pump cycle.

The pericardium is made up of two layers: the visceral and partietal layers. The visceral layer covers the outide of the heart. The partiertal layer forms a sac around the outside of the pericardial cavity. 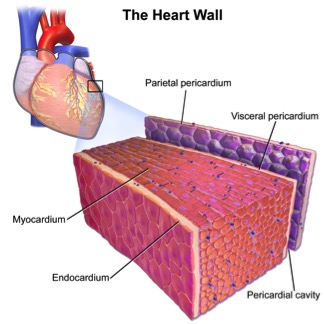 Structure of the heart wall:

The epicardium is the outer most later of heart wall. The epicarium is a thin layer of serous membrane that aids in the lubrication and protection of the outside of the heart.

Thickness of the heart wall is determined by the atria and ventricles:

Chambers of the heart:

The atria are the upper two chambers of the heart, one on the left and one on the right side. They are smaller, thinner and contain less myocardium compared to the ventricles. The atria act as receiving chambers for blood and are connected to the veins that carry blood to the heart. The right atrium receives and holds deoxygenated blood from the superior vena cava, inferior vena cava, anterior cardiac veins and smallest cardiac veins and the coronary sinus, which it then sends down to the right ventricle, through the tricuspid valve. The left atrium receives the oxygenated blood from the left and right pulmonary veins, which it pumps to the left ventricle, through the mitral valve.

The ventricles are the bottom two chambers of the heart, one on the left and one on the right side. They are larger, thicker and contain more myocardium than the atria. The ventricles are the pumping chambers that send blood out of the heart. They are connected to arties that carry blood away from the heart to the lungs and body. The left ventricle receives oxygenated blood from the left atrium via the mitral/tricuspid valve and pumps blood through aorta for systemic circulation. The right ventricle receives deoxygenated blood from the right atrium via the tricuspid valve and pumps blood to the pulmonary artery for pulmonary circulation.

Values of the heart:

The aortic valve is the left-sided semilunar valve between the left ventricle and the aorta. The aortic valve has three cusps named right coronary, left coronary and non-coronary cusps. Behind each aortic valve cusp is a small pouch called a Sinus of Valsalva, two of these pouches contain openings that are the origins of the coronary arteries.

The chordae tendineae, also known as the heartstrings, are cord like tendons that connect the papillary muscles to the tricuspid and bicuspid valves of the heart. The chordae tendineae play a role in atrial and ventrical systole. During atrial systole the chordae tendineae are relaxed because the atrioventricular valves are forced open. When the ventricles of the heart contract in ventricular systole, the increased blood pressures in both chambers push the AV valves to close simultaneously, preventing backflow of blood into the atria. Since the blood pressure in atria is much lower than that in the ventricles, the flaps attempt to evert to the low-pressure regions. The chordae tendineae prevent the eversion, prolapse, by becoming tense thus pulling the flaps, holding them in closed position. 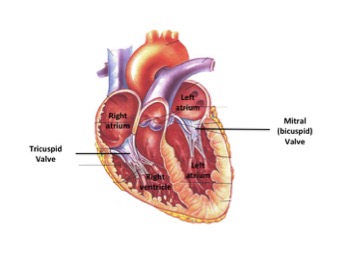 Conducting system of the heart:

The cardiac conduction system is a group of specialized cardiac muscle cells in the walls of the heart that send signals to the heart muscle causing it to contract. The main components of the cardiac conduction system are the SA node, AV node, bundle of His, bundle branches, and Purkinje fibers. The SA node starts the sequence by causing the atrial muscles to contract. From there, the signal travels to the AV node, through the bundle of His, down the bundle branches, and through the Purkinje fibers, causing the ventricles to contract. (MedlinePlus, 2016). 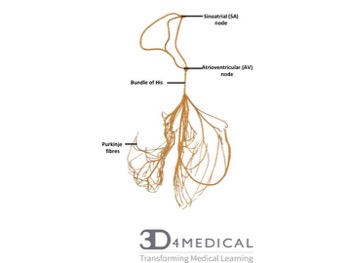 vasculature of the heart: 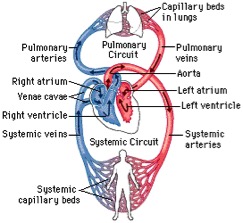 Description: A myxoma (mikˈsōmə) is a benign tumor of the heart that contains a mucous or gelatinous material. They only occur within the heart and although they may occur in any of the cardiac chambers 75% of myxomas are found in the left atrium. Typically, myxomas grow off of the inter-atrial septum and tend to be solitary (occur as a single mass). These tumours often grow from a stalk and swing freely with the flow of blood. Due to its close proximity to the mitral valve, the myxoma may swing in and out of the valve continuously plugging then unplugging the opening causing a obstruction in blood flow.

Symptoms: Myxomas typically present as a tumor embolus, small pieces of the myxoma or blood clots that form on the surface of the myxoma break off, travel through the bloodstream and block arteries. Patients with myxomas may feel faint or short of breath when they stand. This is caused by gravity pulling the myxoma into the opening of the mitral valve, resulting in less blood being pumped out of the heart. Lying flat usually causes the myxoma to move away from the valve and relives the symptoms. Other symptoms include

Causes: The cause of myxomas are unknown. Myxomas usually develop in women between the ages of 40 and 60. About 5% of myxoma patients show a familial pattern of tumor development based on autosomal-dominant inheritance. These patients have an abnormal DNA genotype chromosomal pattern.

Diagnosis/ Treatment: Myxomas are often suspected based on the persons symptoms with stethoscope, doctors will hear a murmur produced by abnormal blood flow. Myxomas are then diagnosed using echocardiography. The only treatment of a myxoma Is surgical excision. Periodic echocardiographic evaluation is recommended for patients after surgery to watch for recurrence.

Description: A pericardial effusion is the abnormal build-up of excess fluid between the heart, the lining of the heart and the pericardium. The pericardium is a tough sac that surrounds the heart. Normally, there is a small amount of fluid between the sacs two layers to allow the heart to frictionlessly move during each heartbeat. However, effusions can accumulate over 2 liters of fluid.

Causes: Predominately the cause of pericardial effusion is inflammation of the sac, a condition called pericarditis. The more it becomes inflamed, the more fluid will build-up. Infections are one of the main causes of the inflammation and therefore the effusion it leads to. These infections can be viral, bacterial or tuberculous. Other conditions than can cause effusions include:

The seriousness of the condition depends on the primary cause, size and rate of accumulation of fluid and whether It can be treated effectively. Pericardial effusions caused by cancer are very serious and should be treated immediately. Effusions cause by other conditions such as an infection or heart failure can be treated and the patient can remain free of fluid. Rapid fluid accumulation in the pericardium can cause cardiac tamponade, a serve compression of the heart that prevents the ventricles from fully expanding thus enabling proper heart function.

Symptoms that pericardial effusion is causing cardiac tamponade include:

Diagnosis/ treatment: Pericardial effusions are often discovered after the results of routine tests are abnormal. During an electrocardiogram (EKG) electrodes are placed on your chest that measure the hearts electrical activity. Certain patterns on an EKG can indicate a pericardial effusion or the inflammation that leads to it. An enlarged heart silhouette on a chest X-ray in a suggestion of an effusion. Once an effusion is suspected an Echocardiogram (ultrasound of the heart) will be performed. Any abnormal fluid surrounding the heart is easily diagnosed in an ultrasound examination. Once the effusion is identified, its severity, size and cause are evaluated. In order to do this, a pericardiocentesis needs to be performed. This is a procedure done to obtain a sample of pericardial fluid, this is done by having a needle inserted through the chest, into the pericardium and removing some fluid. Following the procedure, the fluid will be sent to the lab to be tested. Pericardiocentesis’ can also be performed to drain large amount of fluid from the sac, this is done for severe cases to manage symptoms. For pericardial effusions due to inflammation of the sac, treating the inflammation will also treat the effusion. This is achieved by prescribing various medications.